Stags on the high tops joined us in roars of approval. 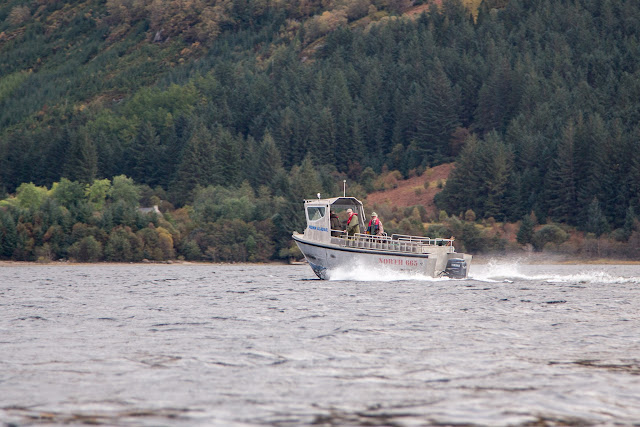 Just as we arrived at Glenaladale, the estate boat Fionn Aladail (Fair Aladale) left the rickety wooden jetty with a shooting party aboard. Her helmsman courteously kept the engine revs down until they were well past us. We were right in the middle of the Glenaladale red deer stag shooting season. 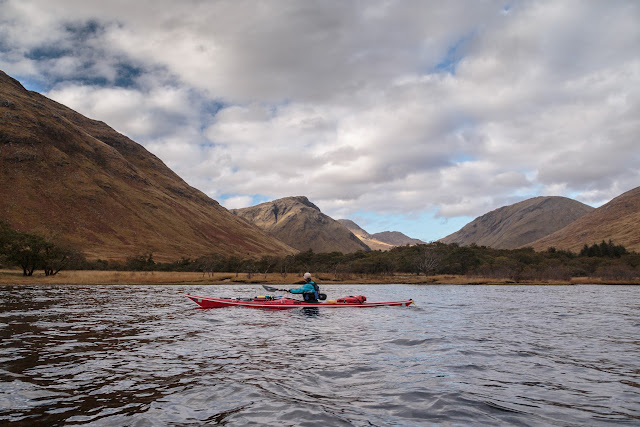 As we paddled past the delta of the Aladale river the glen stretched away into the distance then above... 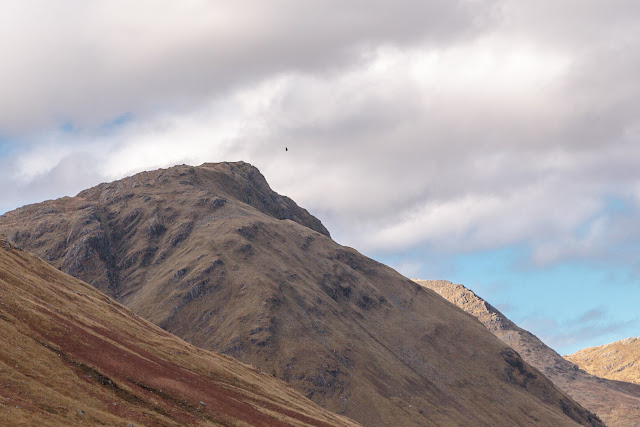 ...the steep slopes of Croit Bheinn 661m (the hunchbacked hill), we caught sight of a magnificent golden eagle soaring in the updraft above the mountain side. 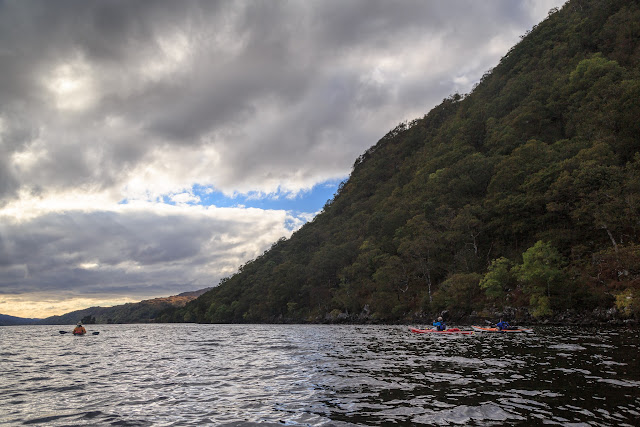 South of Glenaladale the woodland became even denser with trees clinging to the steep slopes from shore level up to the crags high above us. 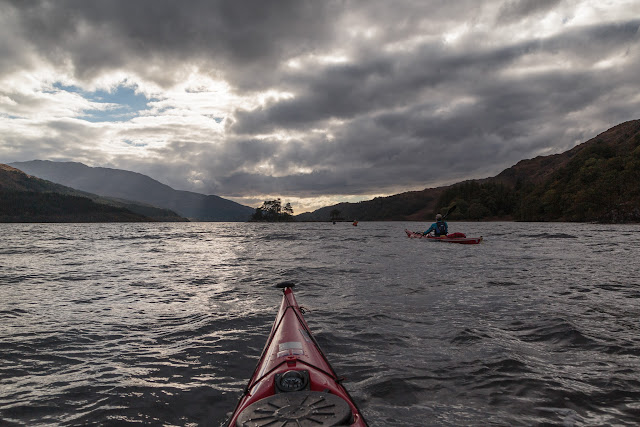 As we neared Gaskan we came across a delightful... 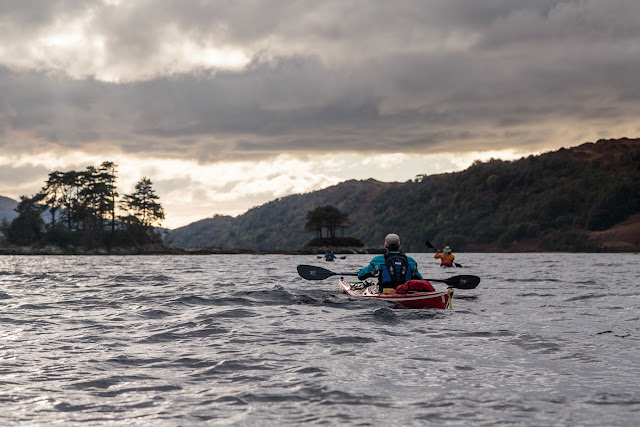 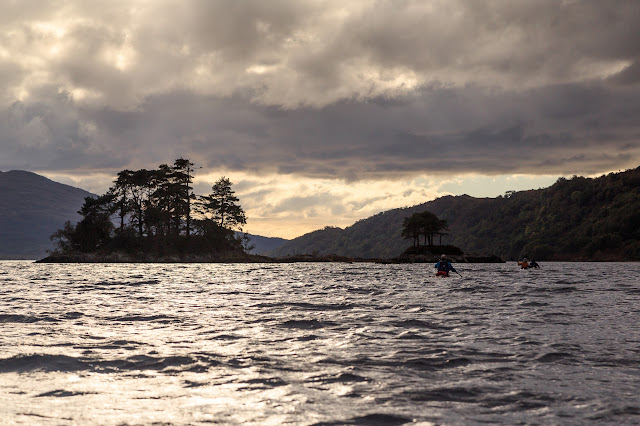 Its name could be isle of the meeting place, fellow warrior or suckling pig.  Several lochs have islands where warring chieftans met without fear of being ambushed by each other's men. 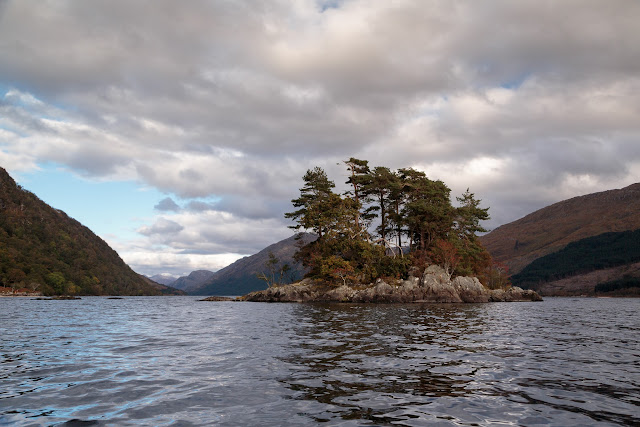 We drifted for some time in the lee of the little isle hoping that it would be highlighted against the dark hills behind by a blink of low sunshine. 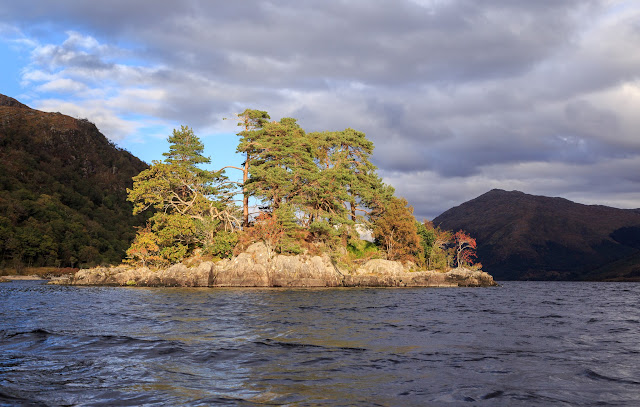 Our patience was rewarded. 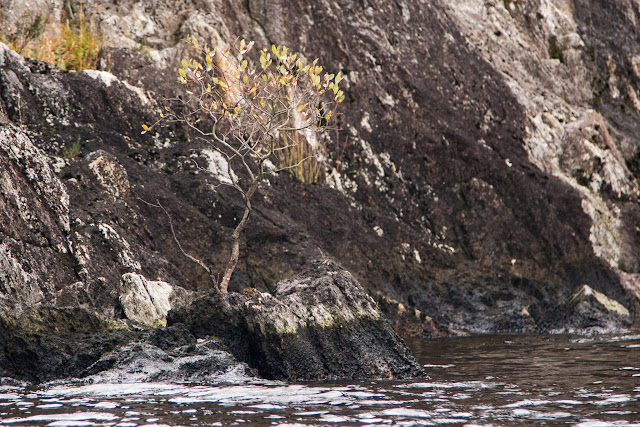 This little tree will need to have much patience to grow tall as its roots clutch only bare rock on the loch shore. 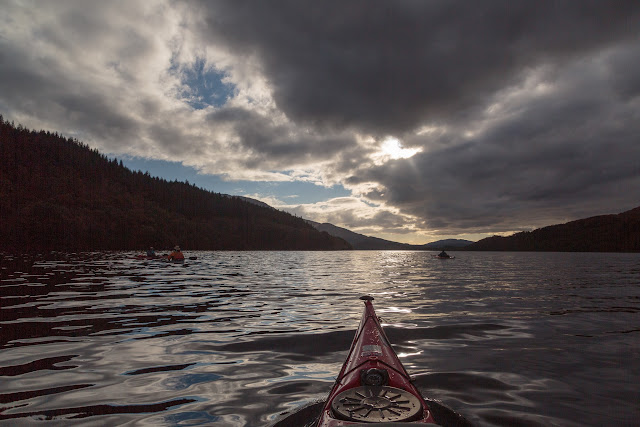 By now the sun was sinking fast and the shadows were lengthening. We had an idea of where to camp based on a previous trip but we had met a couple of open canoeists who had camped there the previous evening and found their night disturbed by a herd of cattle. 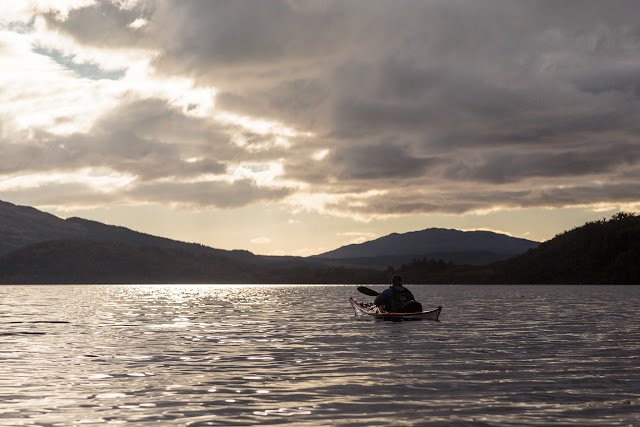 I had in mind an alternative but had never landed there. We decided to detour to my back-up but knew that if it was not suitable we would be setting up tents in the dark at our original destination. 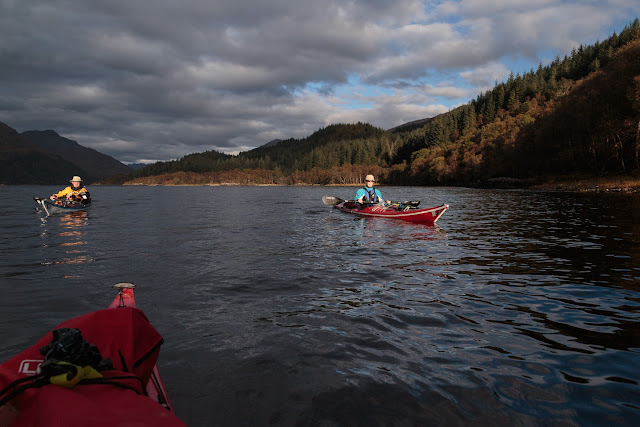 As the sun sank below the clouds we were bathed in a beautiful light. 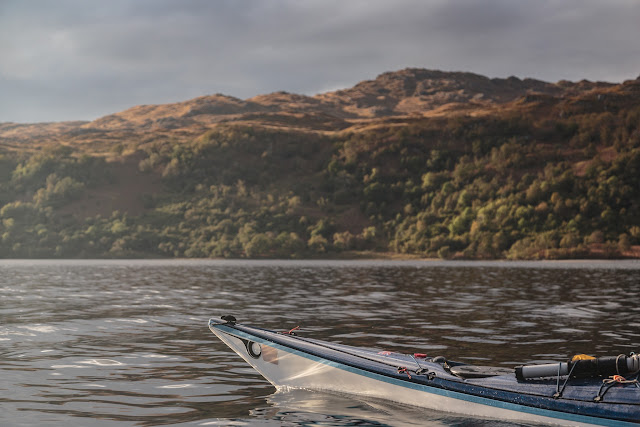 Although we had a fair way to go... 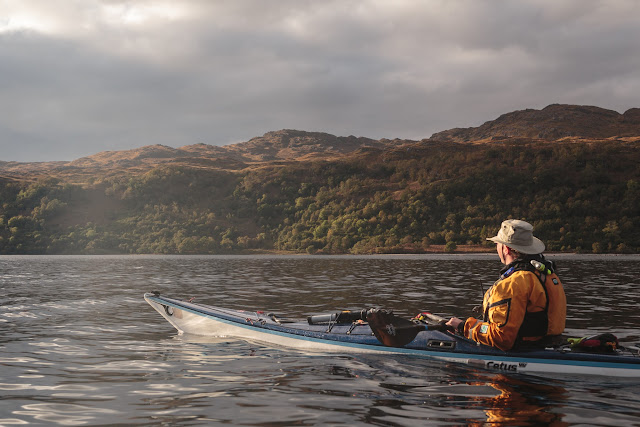 ...we could not help but stop and savour the beauty of Loch Shiel at Sunset. 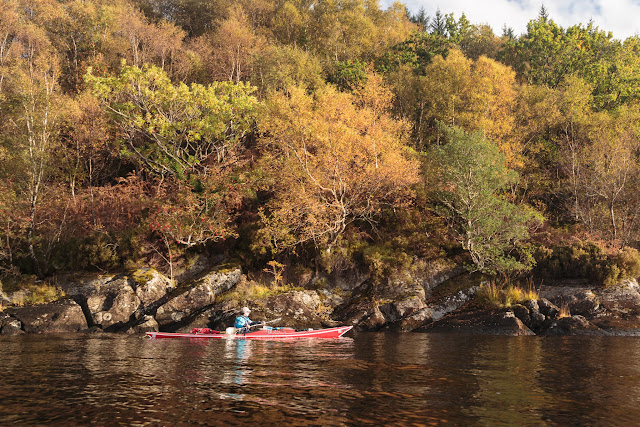 The low sun really turned up the vibrance of the autumn colours. 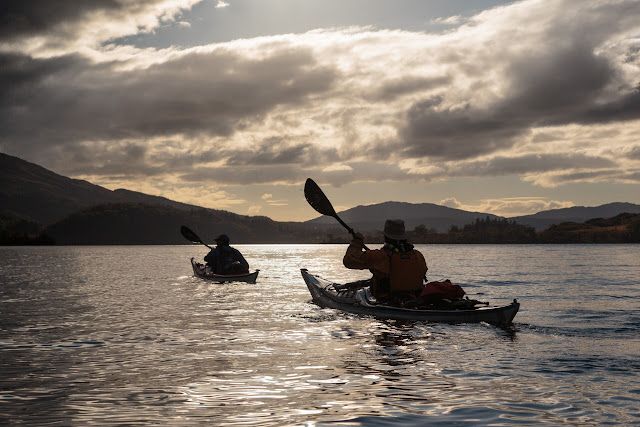 But we needed to press on, light was fading fast we were now committed to camp "B". By now the landscape ahead was of low gently rolling hills and... 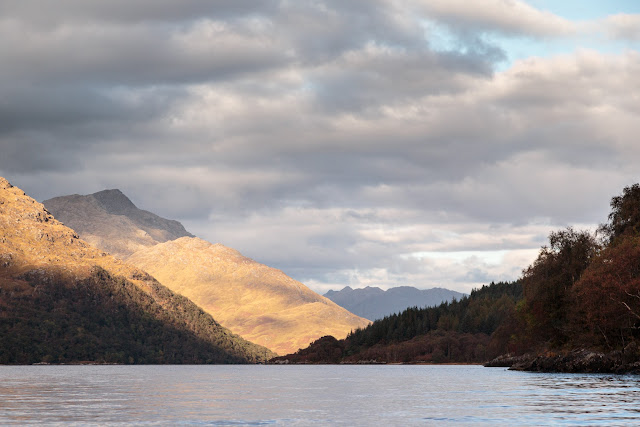 ...we soon left the high mountains... 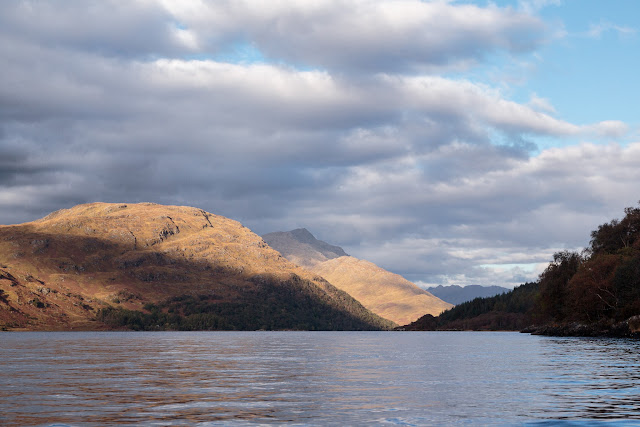 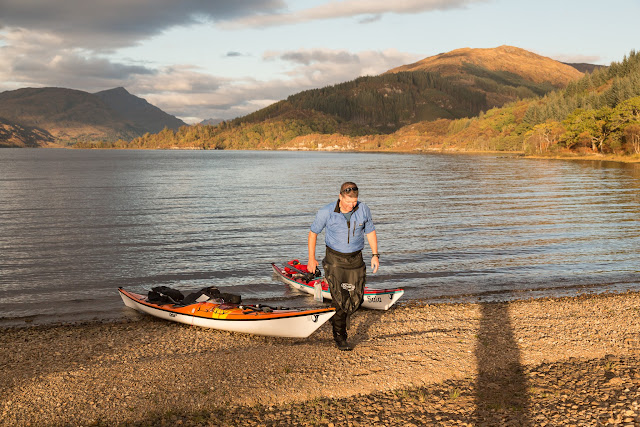 We arrived at our destination, camp "B", at sunset. After a quick check we decided it would be ideal. I went for a quick swim to freshen up before the warming rays sank below the horizon. 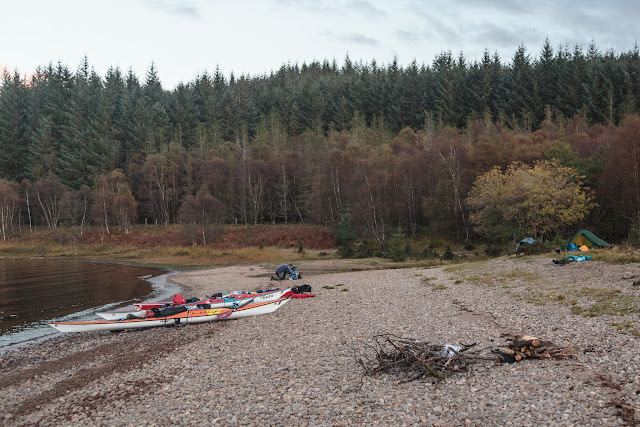 After getting the tents up we quickly gathered some firewood before darkness fell. 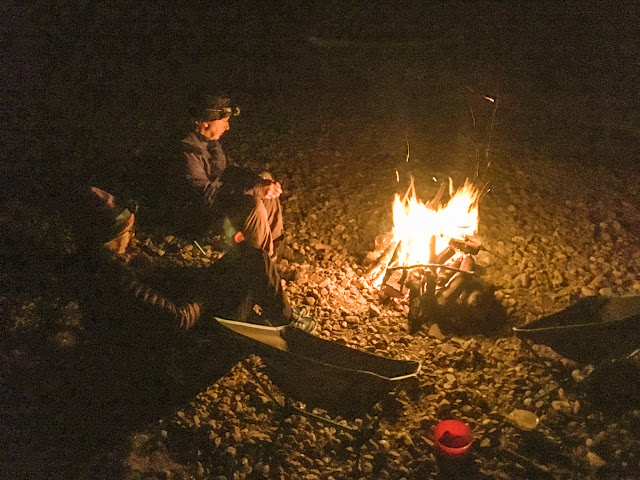 We cooked our meal by our fire's flickering flames then afterwards baked potatoes for afters which we enjoyed with butter and salt. 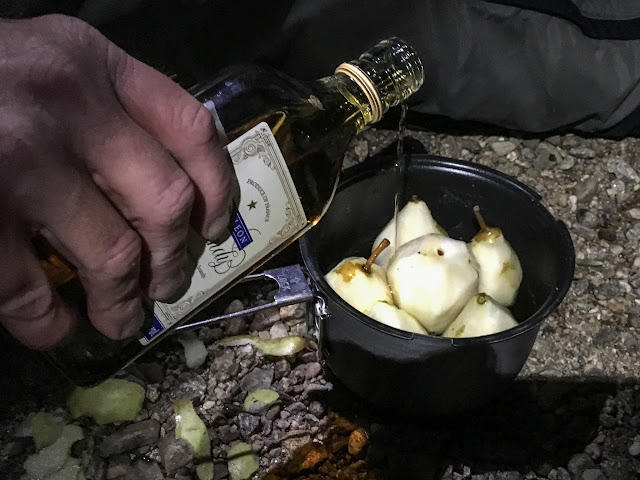 Then Ian surprised us with poached pears in brandy for second afters. It seemed that the stags on the high tops joined us in roars of approval.
For the full stereovision experience read Ian's account here...

Posted by Douglas Wilcox at 7:38 pm No comments: