On our paddle round the exposed headlands, reefs, wrecks and tides of Burrow Head, Tony and I, like countless seafarers before us, found shelter in the harbour of Isle of Whithorn. The surrounding waters of the Solway Firth and the Irish Sea are cruel mistresses. In January 2000 the Solway Harvester , a scallop boat, went down and all her crew, seven local men, were lost.

I have mentioned the Isle before. It was indeed an isle until a causeway was built in 1790 connecting it to the mainland and enclosing its safe harbour. The houses above are built on this causeway. The harbour served pilgrims from afar who wished to visit the shrine to St Ninian. He founded a Christian church (The White or Shining House: "Whithorn") in approximately AD 397. The White House was situated 6km inland from the Isle. Recent archaeological digs have found evidence of trade with Mediterranean countries dating back to the 4th century AD. 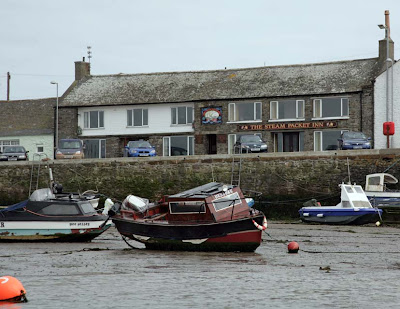 Turning to starboard, our eyes fell upon on the Steam Packet Inn, a potential sea kayaking pub! We felt duty bound to assess whether it came up to the standards required of such an establishment. Being visible from the kayaks was a promising start. We had some reservations on entering by the main door and seeing freshly pressed, white table linen on the tables in the dining room. Turning into the pub, our salty boots sank into a deep carpet. Would the staff welcome two thirsty kayakers in dry suits? We need not have worried! The true test of a sea kayaking pub was passed. The bar maid did not bat an eyelid as she took our order for two pints of Guinness which was offered at two temperatures, including my preferred ice cold. 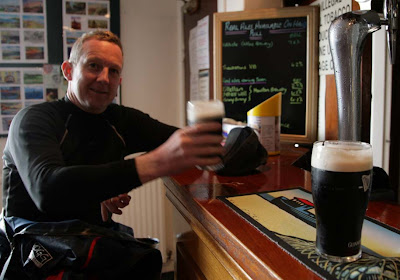 Regular readers of this blog will appreciate our never ending quest for oases of refreshment such as pubs and ice cream parlours. On this occasion, we were stunned to discover that the Steam Packet Inn also served the local delicacy of Cream of Galloway Ice Cream. Tony and I were delighted to award a 5 star seakayakphoto.com rosette to this esteemed establishment!

The staff of seakayakphoto.com do hope that readers appreciate the hardships that are endured in bringing these reports to their attention.
Posted by Douglas Wilcox at 6:45 pm 10 comments: