Photography, is Photoshop a cheat? 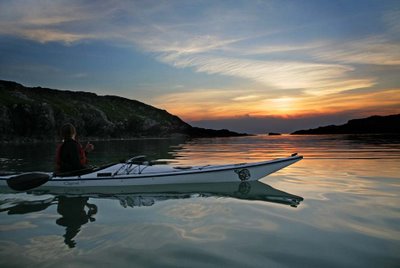 This is a nice photo of a summer sunset off Loch Roag in Lewis. It is very much as I remember it but it is actually composed of 2 separate photos which were taken one after the other but with very different exposure settings. One was taken for the light in the foreground and the other was taken for the sunset. I joined them together later using Photoshop. If I had just set the camera to auto, the kayaker would have been a dark silhouette.

Simon Willis has recorded a Podcast with me talking about sea kayaking photography which should be published in the first week of December. The above photo is one that will appear on his website to accompany and illustrate the Podcast.

Some photographers do not like this type of photo, saying they look unnatural. What they really mean is they don't look like the photos they take! The human eye copes with a much greater range of light as it roves round a scene (with the iris altering its aperture as it goes) than a camera which takes a fixed exposure for the whole scene. Film and digital senors are also much less sensitive than the retina. Whatever, I like the technique and it's really just a development of dodging and burning when exposing a print in the darkroom. I did a lot of B+W photography before moving into transparencies but many photographers missed out the darkroom and have spent most of their careers using transparency film which allows for no post exposure manipulation. It was a highly skilled job getting the correct exposure on good old Kodachrome II transparency film with its 25 ASA speed and narrow exposure latitude. Those photographers take a great pride in getting exposure right first time and Photoshop must seem like the spawn of the Devil to them.

I think you can take photography far too seriously. As I said in the podcast to Simon, I am not a forensic photographer recording a crime scene. I am just trying to capture memories and memory is a fleeting and fickle thing.
Posted by Douglas Wilcox at 10:26 pm 5 comments: