Seven years to Coll but it's too late to call 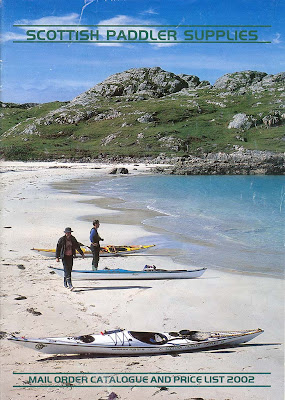 Our trip to Coll had been seven years in gestation. When I first thought of taking up sea kayaking, in the summer of 2002, I gave the late Mike Thomson of Scottish Paddler Supplies a phone call. He sent me his catalogue and on the front cover there was a wonderful photo, by Ronnie Weir, of a white shell sand cove with azure blue water backed by hills of grey gneiss and green grass. Three kayaks lay on the beach ready to take their owners on to the next piece of paradise. Mike is walking purposely towards his kayak, pipe clamped firmly between his teeth.

I soon called Mike back. “Where is that?” I asked him. “Oh that’s the west coast of Coll”, said Mike in his deep gravelly voice, "you will need good weather and a great deal of luck to get out there!”

Each year since then, I have tried to get to Coll but the weather and or surf always broke before we went. Each year, Mike would ask, "Well have you got to Coll yet?" That was how he started our last phone conversation in about May 2008, just before he died. I always answered "Not yet Mike, but soon!" Mike always said, "Give me a call as soon as you get there". Well we finally made it out to Coll on this year's second attempt and it was everything Mike said it would be.

Mike, I am sorry it's too late to call, but thanks for the inspiration.