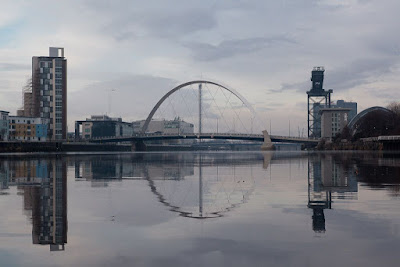 From the Kingston Bridge we continued down the River Clyde towards the Clyde Arc bridge. It was completed in 2006 by Halcrow. It is a tied bowstring arch of steel box section, which supports a precast reinforced concrete deck. From this view, the Glasgow Tower (beyond the bridge) looked like an arrow set for launch from the Arc's bow! 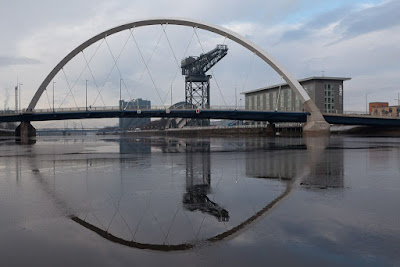 The Arc crosses the Clyde at an angle and is therefore, quite logically, better known by its alternative name: the "Squinty Bridge". It was built to service the growing media centre which has developed on the south bank of the Clyde. 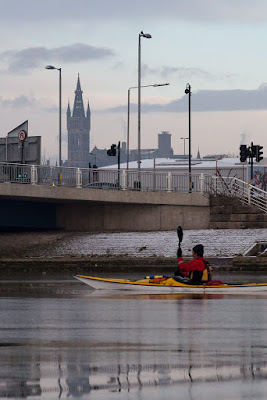 The tower of the University of Glasgow can be seen from the now empty Finnieston Quay. At one time it would have been lined with rows of ships, several deep, which would also have extended into the now filled in Queen's dock. 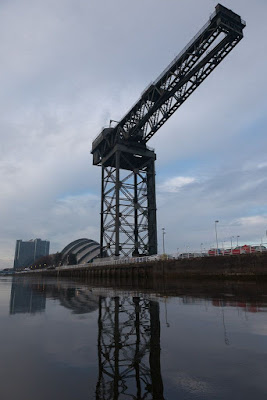 The Finnieston crane now stands motionless above the river. It is the furthest upstream of several Titan cantilever cranes on the Clyde. It was used to load steam railway locomotives from the Springburn locomotive works onto ships. At the height of its industrial power, Glasgow manufactured 25% of the World's railway locomotives. 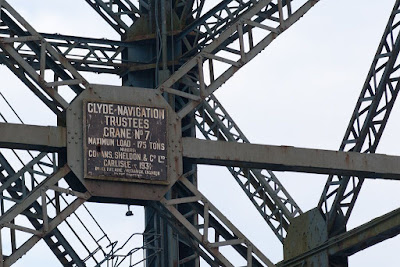 The tower was built by Cowans, Sheldon of Carlisle, on piles by Sir Willam Arrol of Glagow and the cantilever was by the Cleveland Bridge and Engineering Company. 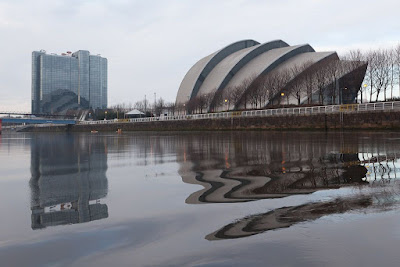 Continuing down the north bank and Finnieston Quay, we approached the Clyde Auditorium, which you will be unsurprised to learn, is popularly known as the "Armadillo". It was designed by Foster and Partners and built on the site of the now filled in Queen's dock. 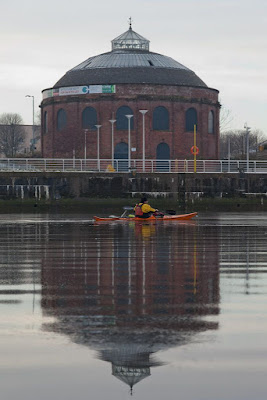 The Glasgow Harbour Tunnel was built in 1896 and connects Finnieston Quay on the north to Plantation Quay on the south.  Two rotundas provided a lift down to two vehicle and one passenger tunnels. This is the Plantation rotunda the Finnieston rotunda is just to the east of the crane. The vehicle tunnels were closed in the mid 20th century but the passenger tunnel remained open until 1980. The tunnel was never a financial success as it faced strong competition from the Finnieston Ferry, which had an unusual lifting vehicle deck so that it could load and off load at a vertical quay side, regardless of the height of the tide. It started service in 189o and operated until 1966. 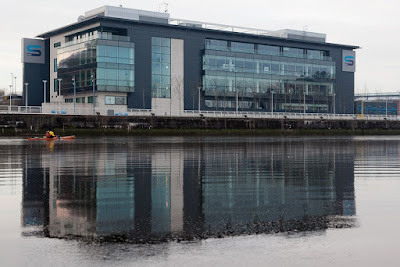 Plantation Quay on the south bank has been renamed Pacific Quay and is now the centre of Glasgow's Digital Media Quarter. This is the Scottish Television building. 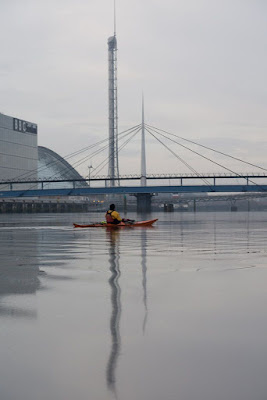 Pacific Quay is now linked to Finnieston by two footbridges. The first, Bell's Bridge, was built in 1988 to service the Glasgow Garden Festival which took place on the filled three arms of Princes Dock, which lay behind Pacific Quay. Bell's Bridge was engineered by Crough and Hogg and its two main spans are supported by cable stays from a rotating pointed tower, which opens the bridge and allows bigger ships to pass through. Until 2001 the paddle steamer Waverley regularly went through the bridge to her berth at the Broomielaw but she now berths below the bridge at Pacific Quay. 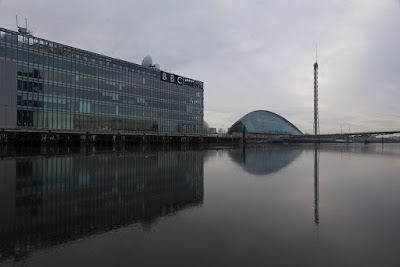 Once through Bell's Bridge, our view of Pacific Quay was dominated by the BBC Scotland building, the Glasgow Science Centre and the Glasgow Tower. At 127m high, it is Scotland's tallest building. It has a teardrop cross section and rotates 360 degrees, so that its slimmest outline faces into the wind. 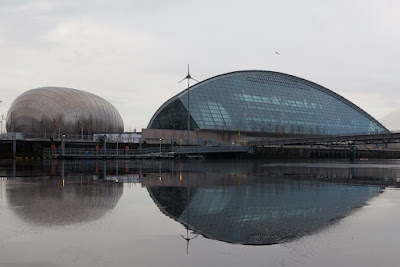 The curious bulbous building behind the Science Centre is Glasgow's IMAX cinema. So far it has avoided being called the "Glasgow Blob". 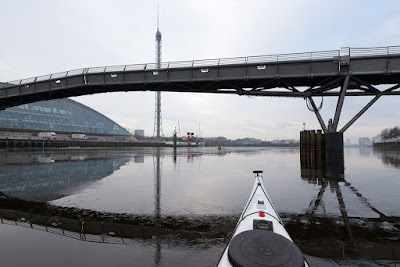 We now passed under the most recent of the City centre bridges. It is the Millennium Bridge completed in 2002 and engineered by MG Bennet Associates. It is built of steel lattice supporting a sheet steel deck. Hydraulic rams lift the two centre spans to allow vessels to get further up the Clyde.

One thing is for sure, this river city has changed out of all recognition over the last 3 decades and it is changing still!
Posted by Douglas Wilcox at 12:35 pm 3 comments: