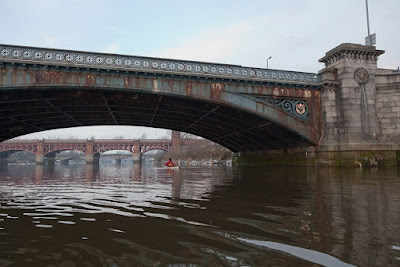 On our voyage down the tidal River Clyde by sea kayak from Glasgow Green, the first bridge we came to was the riveted wrought iron Albert Bridge, built in 1871 by Bell and Millar. Through the arches, the next one downstream is the City Union Railway Bridge built in 1899. 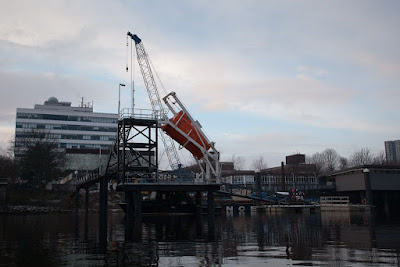 Just downstream of the Albert Bridge, the Glasgow College of Nautical Studies is appropriately situated right on the south bank. 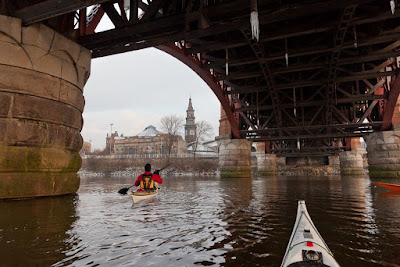 We paddled below the City Union Railway Bridge. It was the first steel bridge on the Clyde and carried 4 tracks into the now demolished St Enoch's station. It is a very low bridge because it was built under a now demolished higher bridge so that there would be no disruption to the rail service. 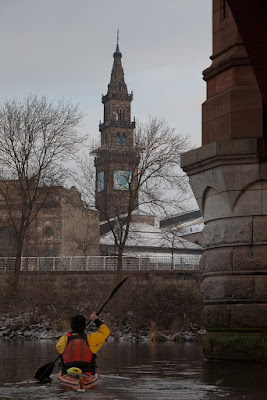 The Merchant City, an old part of Glasgow, lies north of the river here. Many of the old steeples have characteristic blue clock faces. This is the Merchants Steeple, which was built in 1665. It is all that remains of the Merchants Guild Hall and Hospital which was built from 1659 but demolished  in 1817. The merchants could watch for their ships coming up the Clyde from its high balconies. In 1873, the Briggait Fish Market was built on the site round the steeple. 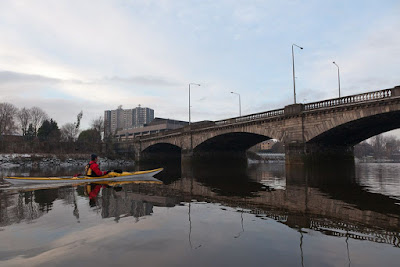 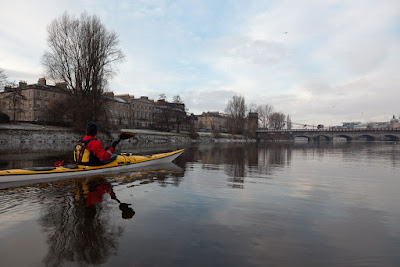 On the south bank the Clyde lies the area known as the Gorbals. The imposing Georgian Carlton Place was built in the early 1800's as a speculative  attempt to create a wealthy suburb for the city's merchants on the south of the river. It failed as the city grew so quickly that the surrounding land was used to build cheap tenement slums. These housed the hordes of workers that flocked here from the impoverished Highlands and Ireland. The merchants moved west of the city as the prevailing westerly winds meant they smelled the Gorbals less frequently.

The South Portland Street Suspension Bridge is downstream from Carlton Place. It was completed in 1853 by George Martin but only the stone towers are original. the deck and hangers  were renewed in 1870 and 1926. 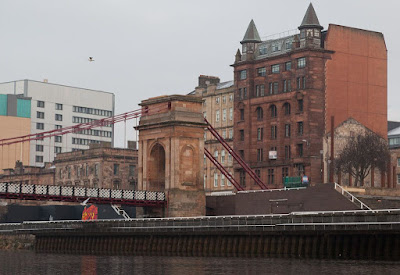 Behind the suspension bridge on the north bank, the Victorian Riverside House on Clyde street now stands alone, surrounded by modern buildings.

You can find out more about the Clyde from Clyde Waterfront Heritage.
Posted by Douglas Wilcox at 10:58 am 4 comments: