Walking among the stones of history in the monastery of Hinba. 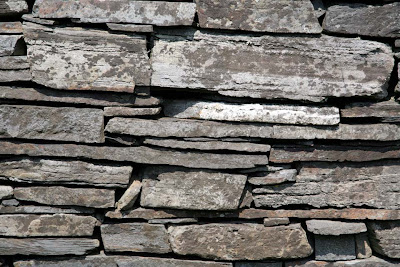 The monastery on Eileach na Naoimh was founded by St Brendan of Clonfert in AD 542. At that time the Garvellachs were known as Hinba or the Isles of the Sea. 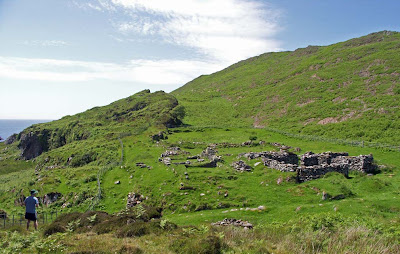 St Brendan was born in County Kerry in Ireland in AD 484. In addition to his Christian faith he was a great seafarer and was also known as Brendan the Navigator. He left on a seven year voyage to discover the fabled Celtic island of Tir nan Og (or Land of Perpetual Youth). Some say he discovered North America but what is certain is that he came here to Hinba and founded a monastery. Some buildings are beehive cells similar to those found at Skellig Michael in Ireland. Even St Columba, came to Hinba for some peace and meditation and to escape from the bustle of his monastery on Iona. St Brendan's influence is also remembered in other local place names such as the Kilbrannan Sound. 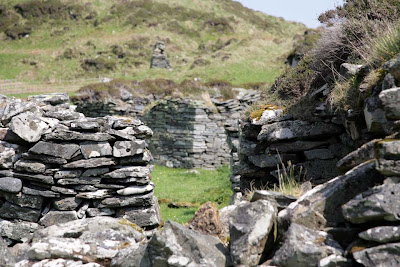 The island has been uninhabited for a thousand years since the Vikings sacked the monastery. Today, even in the spring sunshine, wandering among the ancient stones of Hinba, you are surrounded by echos and ghosts of the past. 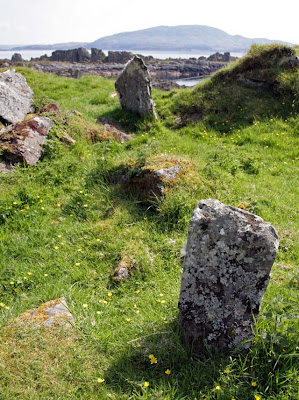 Ancient grave stones protrude above the encroaching mosses and grass. Their only markings are the patterns of lichens, which grow in abundance in the clean air. The identities of the occupants of the graves below are unknown but they were our ancestors and like us they were attracted to this necklace of islands to escape the everyday world. Unfortunately for them, 500 years of peaceful meditation were ended by a change in the outside world; the arrival of the Vikings.

To this day St Brendan is the patron saint of seafarers and (dare I say it?) sea kayakers.
Posted by Douglas Wilcox at 7:56 pm 2 comments: