An unarmed portage across the Tarbert of Jura 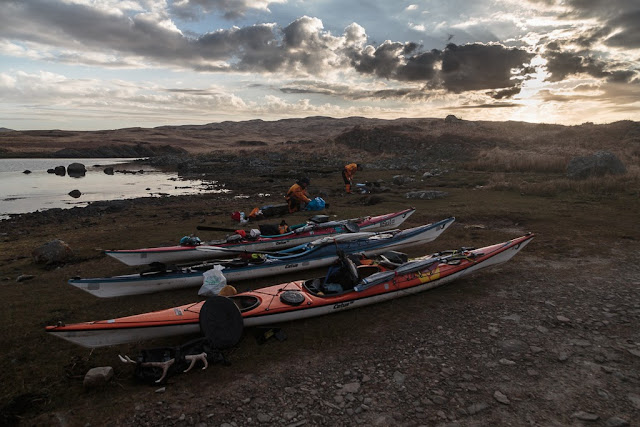 After landing at the head of the inner part of West Loch Tarbert, Jura our first priority was breakfast. 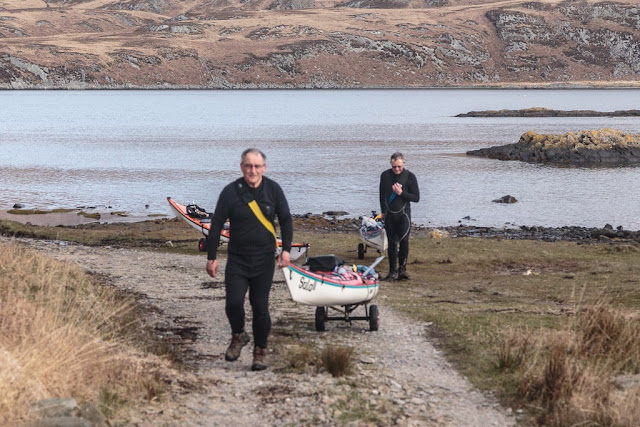 We then set off on the 1.9km crossing which is 26m high but involves 40m of ascent. I was using the prototype KCS Easy-Haul Harness (which I have already reviewed here) and Mike and Ian were using portage slings with short contact tow lines to attach the sling to the kayak. Straight away there was a disadvantage to using portage straps. Mike's was dry but we had used Ian's to extract the boats from the muddy waters of the loch and so Ian got a wet, muddy shoulder. As you can see you do not need to use your arms while towing your kayak on the trolley. 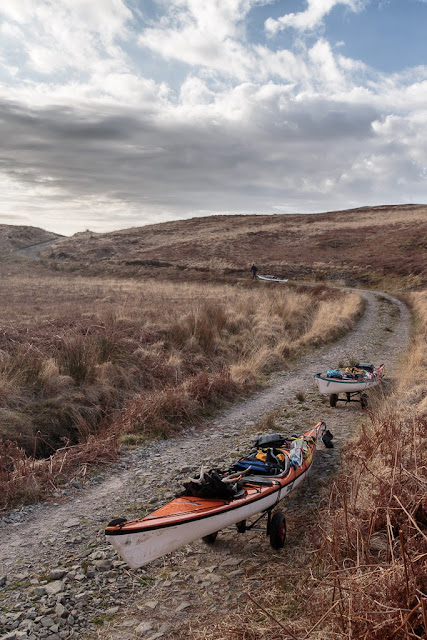 My asthma was bothering me quite badly so I soon had to stop and take a breather but... 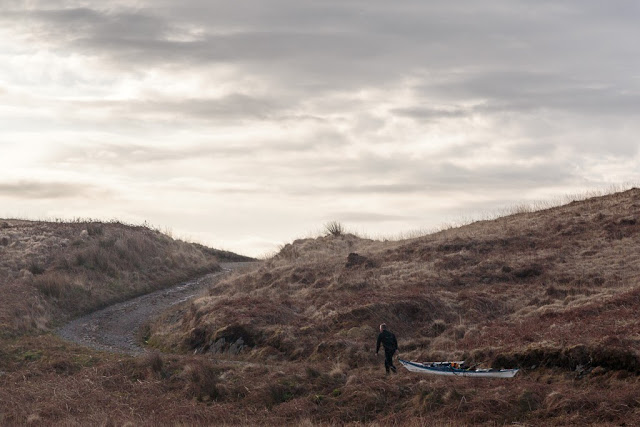 ...there was no stopping Mike and he soon forged ahead. 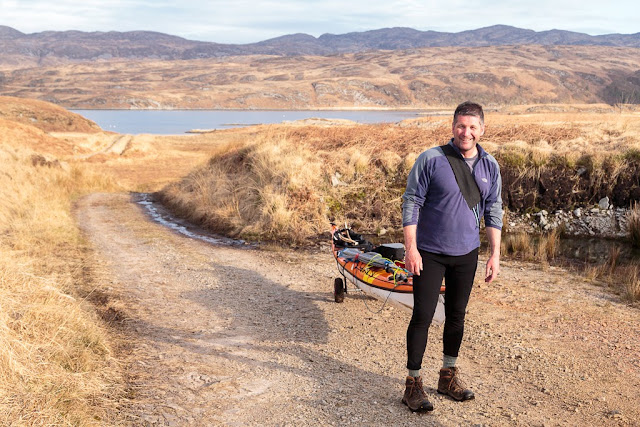 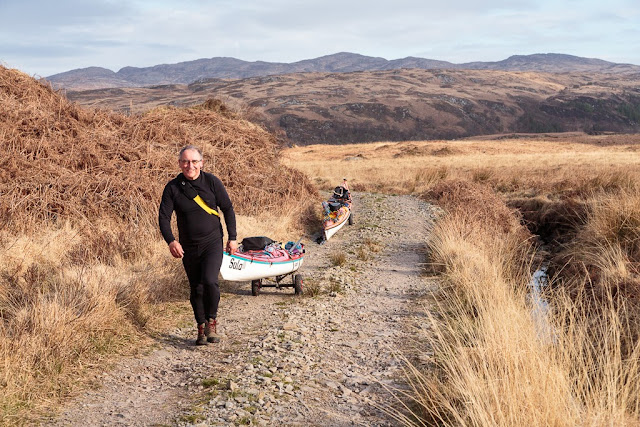 ...myself made more leisurely progress and as you can see we did not need to use our arms. 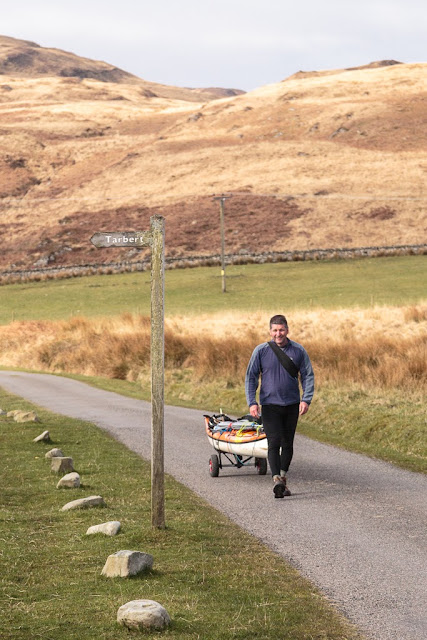 Soon we were across the summit and down to the Island's main road which we followed for a brief distance until we came to the sign for Tarbert. 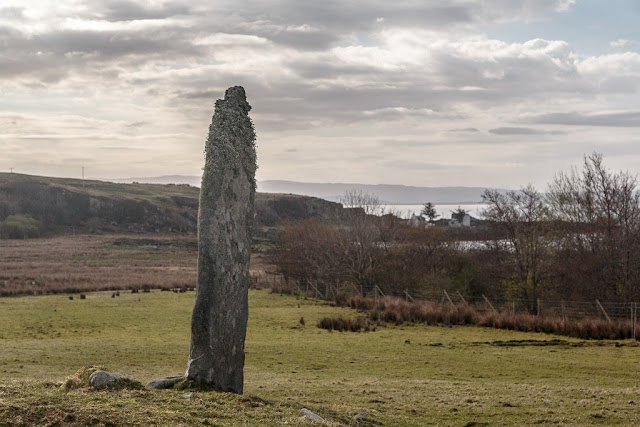 There was a much older sign nearby this standing stone has stood here for several thousand years. We were hardly pioneers of this route. There is also an early Christian chapel nearby where the bereaved carrying their dead to Oronsay and Iona would stop and pray for their safe passage and for the safe passage of the deceased into the next world. 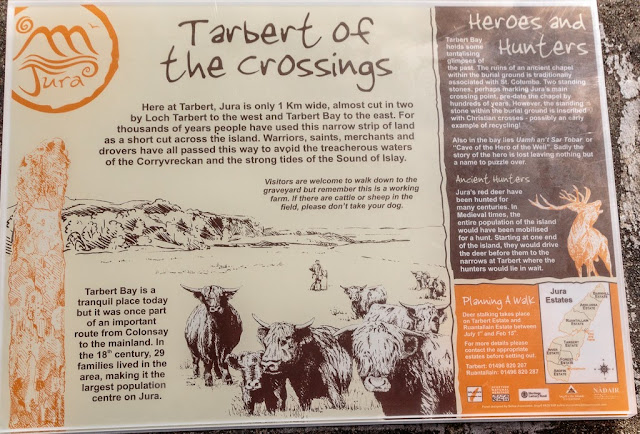 At the Tarbert track turn off a new sign has been situated. 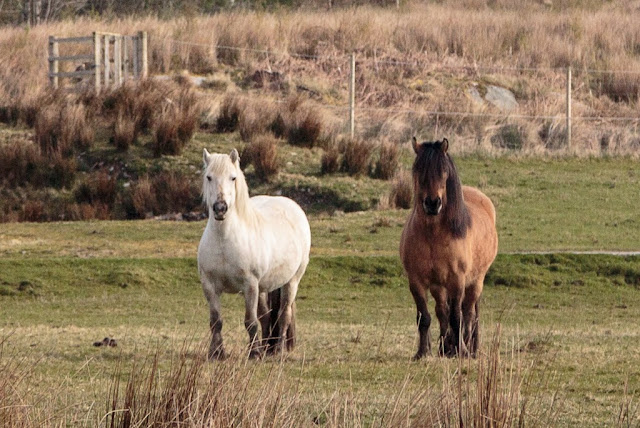 Our progress to the beach was watched by two sturdy garrons which are used to take deer carcasses off the hill during the stalking season. Deer shooting is a major part of the island's economy.

There are many places in Scotland called Tarbert or Tarbet. The name comes from the Gaelic word Tairbeart. In modern Gaelic this means isthmus but its origin lies in "over carry" or "draw boat". Of course sea kayakers were not the first to portage their boats over the isthmus at Tarbert.  In about 1093 Magnus Barefoot, King of Norway, had made a truce with the King of Scotland that allowed him to claim possession of any land he could "sail" round. Of course he didn't necessarily use his own Vikings as labour. Unlike this Viking publicity picture, he "recruited" the unfortunate locals to do the drawing. Any that were too weak to pull were probably used as rollers under the boat. Unlike the Vikings, we had come unarmed and so had to draw our own boats across the isthmus.

Mention of the Vikings brings me back to the origin of the name Jura. I have already mentioned that three Viking words are thought by some to explain the name (the words for beast, deer and udder). In fact the name Jura predates the arrival of the Vikings by at least 150 years.  Ecclesiastical writing in AD 678 recorded what we now know as Jura as "Doraid Eilinn". 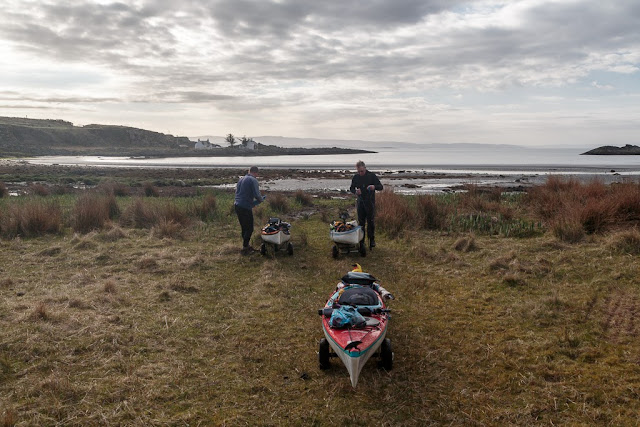 We now arrived at the beach. Unfortunately it is a trap for rotting seaweed and unsuspecting sea kayakers. Photo 17/4/2015
When Tony and I were last here a year previously it had not been too bad. This time it was on the retching side of bogging awful. We put drysuits and boots on to wade through the foul mass each of the six times it took to get the three boats to the beach. Two of us at the rear used a portage strap to take some weight off the wheels. 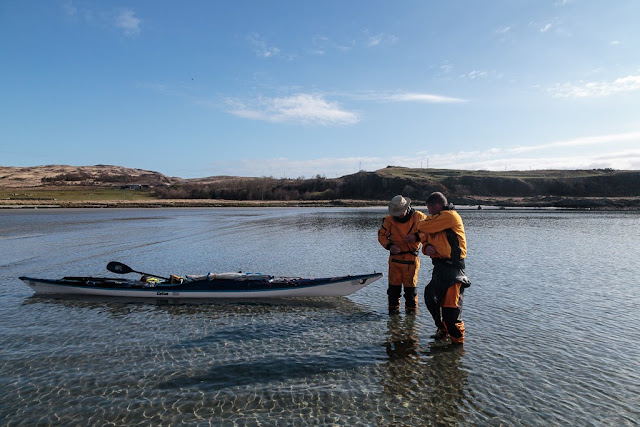 What a relief it was to wade into the clear waters of Tarbert Bay. We spent some considerable time cleaning the stinking glaur off our boots, suits and trolley wheels. However we were in no rush, the south going ebb was in full flow and we needed to go north! We were now back in the Sound of Jura.
Posted by Douglas Wilcox at 4:00 pm No comments: