Banking on the recession

This massive billboard advert caught my eye. The Royal Bank of Scotland was a major casualty of the World recession, after it had over invested in the US subprime mortgage market. The bank is trying to recover by concentrating on its home market and this billboard is part of its campaign to rebuild its image with Scottish customers. I hope they are not thinking they will recoup £2 billion or so from some of the remote communities featured in the adverts. When I first saw the incredibly beautiful TV advert, I thought it was for Visit Scotland, the tourist board. The above photo was taken on the island of Tiree in the Inner Hebrides and is pretty much the view we recently enjoyed when approaching Scarinish harbour. 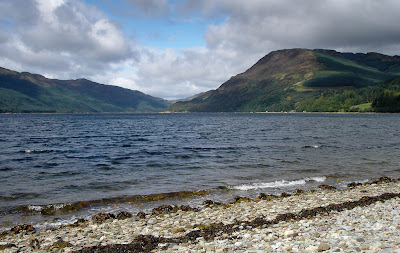 This is lovely Loch Striven. It deeply bisects the beautiful Cowal peninsula, which protrudes into the head of the Firth of Clyde. It is a an interesting place to paddle and is in complete contrast to the exposed isle of Tiree. So what is the link, I hear you ask? Well it is to do with the World recession. 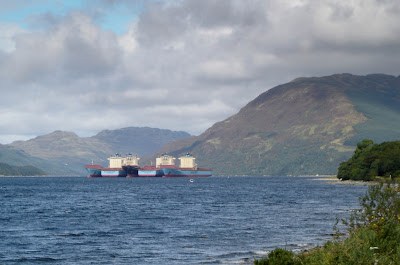 Moored within the Loch are five huge container ships from the Maersk Line. One is the Maersk Beaumont and I reported her arrival in the Clyde on the 2nd of May this year. 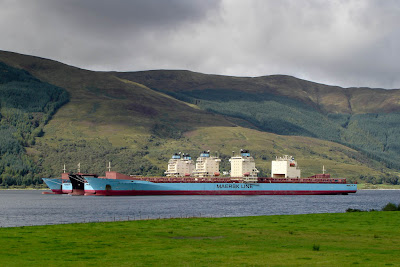 These great ships, which normally carry the World's trade, are weathering out the worst of the recession, here in the sheltered recesses of Loch Striven. Despite its apparent isolation, Loch Striven has played its part in the World economy on many occasions in the past. I sailed in the loch in May 1974 and there were 10 giant oil tankers moored right along the length of the loch.there. They were laid up as a result of the '73/'74 oil crises. Then in '76 and '77 two giant LPG carriers, which had just been built in Belfast, were mothballed until '92 and '99 in Loch Striven because the discovery of North Sea gas had made them redundant.


View Larger Map
At the mouth of Loch Striven an inconspicuous jetty is actually a NATO fuelling point for warships. A huge series of oil tanks are hidden in the hills above. 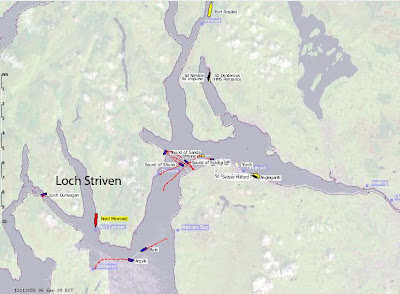 Today on the 6th September 2009 ShipAIS shows that the Nord Mermaid is unloading fuel oil.


View Larger Map
Ardyne Point at the mouth of Loch Striven has another connection with oil. 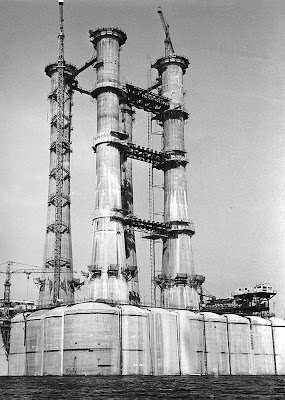 I took this photo off Ardyne Point from a yacht in May 1978. It shows the concrete Cormorant Alpha oil production platform nearing completion in the Ardyne construction yard, before being transferred to a Norwegian yard for completion. There is an interesting story about this rig told in the Dunoon Observer. 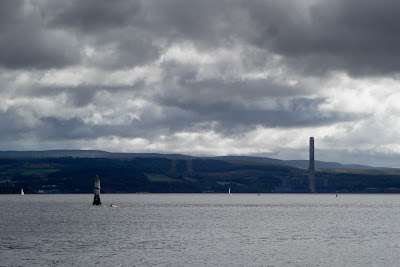 Oil tankers are not the only things to be mothballed on the Clyde. Just a few miles from the mouth of Loch Striven, on the east coast of the Firth of Clyde lies Inverkip oil fired power station. This was opened in the early 1970's just when the oil crises made it uneconomic to generate elictricity from oil. It was only used intermittently and was mothballed in 1988. Its huge chimney of 236m is Scotland's tallest structure and is a landmark for miles around. It is due to be demolished this year.

All in all, Loch Striven is a fantastic sea kayaking destination and despite its proximity to Glasgow, is little known except to local Cowal sea kayakers such as Pam.
Posted by Douglas Wilcox at 10:31 pm 1 comment: