I have not been out sea kayaking recently. The weather has not been good but the real reason is that I have hurt my knee again. I depend on other people to help me get the kayak off the roof at the beach and when I get home I have a pulley system under my carport. However, in November and December I was staying at my mother's house in Ayr as she was recovering after an operation. I had no alternative but to get the kayak off the roof myself. On the last occasion I had very nearly done it when my left knee dislocated and I fell to the ground in some pain. I dropped the kayak and the stern hit the car bonnet denting it. On the previous outing David was helping me load at the beach. David also has arthritis and we both managed to drop the kayak. This time it hit the roof above the doors and the wing mirror and scratched both. Admittedly the kayak was a Delphin RM which is not light but enough was enough. Some action was necessary so I drove up to Kari-tek and got myself one of their Easy Load Roof Rack systems (ELRR). Due to having a really sore knee I chose to have Kari-tek to fit it but when my friend Mike saw one the next day he also bought one, which we fitted ourselves (with me directing!) in a couple of hours. 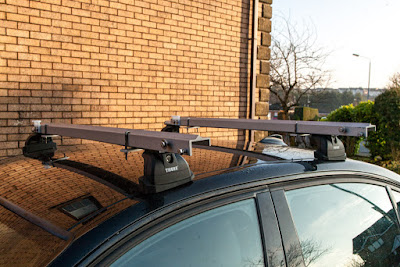 The ELRR runner bar attaches to your existing rack and stays fitted to it. It sits slightly to one side so that the sliding carriage, which carries the sea kayaks, can be lowered down the passenger side of the car but not lean against it. If assembling the ELLR yourself, check that your roof bars are parallel and that the runner bar is fitted horizontally and that the ends of the runner bars are parallel (on many cars the rear cross bar may be narrower than the front so do not just measure from the ends of the runner bar to the car roof rack mounts! Kari-tek supply a really clear illustrated instruction manual. 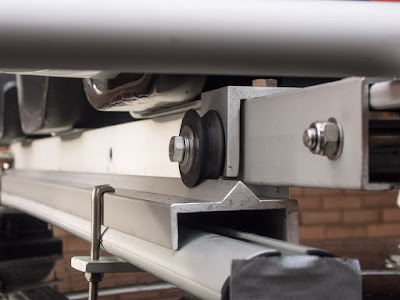 This is the view from the driver side. The sliding carriage has pulley wheels which run on the inverted "Vs" on the runner bars. 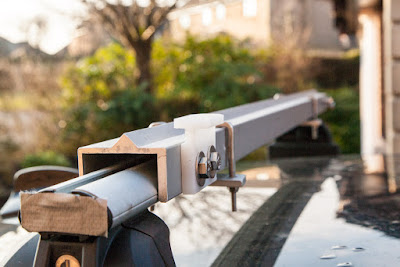 When the carriage is slid onto the roof rack the end of the carriage engages with  (and is secured by) the heavy duty white nylon "T" piece at the driver side of the runners. 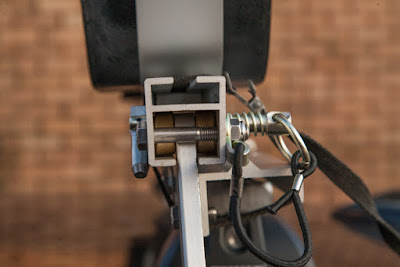 This is the view of the sliding carriage from the passenger side when fitted to the roof rack runner bar . A heavy duty brass roller (just visible) runs in and is retained in the lower channel of the carriage. The roller is attached to a heavy duty... 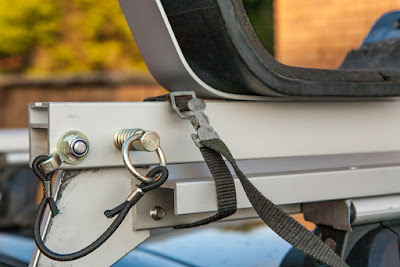 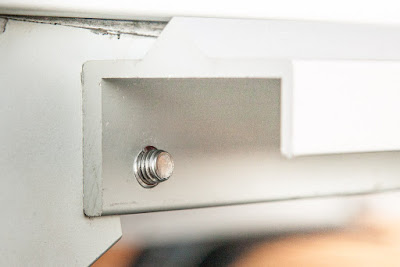 Note that the stainless steel securing bolts (which holds the triangular plate in place are not threaded directly into the aluminium of the runner bar. They screw into hard metal threaded inserts. This is much more durable than screwing a bolt directly into a soft metal like aluminium. 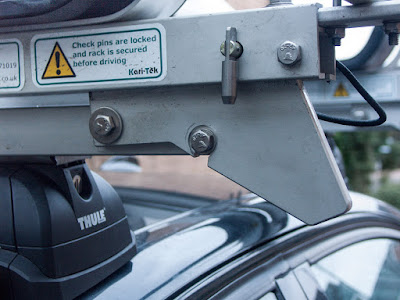 The triangular plate has two slots. The innermost one slides into a bolt which has a large washer and a spacer just a little thicker than the plate. This means that this bolt does not need to be loosened. The outer bolt needs to be loosened (it and its washer are retained in a recess at the head of the slot) then it can be swung up to release the plate and the carriage from the roof bars.  The only issue I have with the construction of the ELRR is that one of the spacers on the inner bolt (out of the four on the two ELRR
we fitted) was cut too small and the triangular plate would not slide into it without the bolt being loosened off.

To remove the carriage from the roof bars I find it easier to remove the two hand rails (which hold the halves of the carriage together) and remove/replace them one at a time. This involves loosening 4 bolts (2 each side). At the top right of this photo you can see that the handle mounting plate slides into the upper channel of the carriage where a bolt on the top secures it. Kari-tek provide two quality spanners and an allen key to fit all the fasteners. 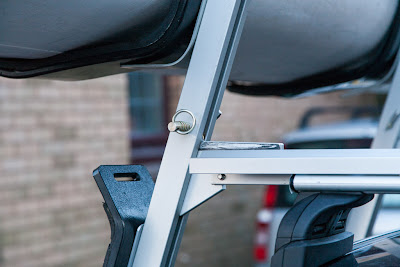 This photo shows the carriage pulled over to the passenger side and lowered down the side of the car. The angle of the triangular plate prevents it hitting the car side. 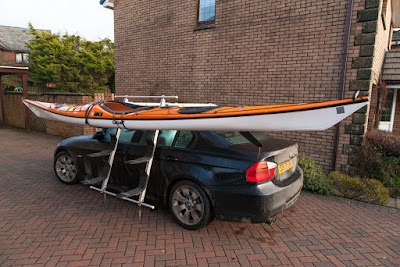 Here the carriage fully lowered over the side of the car and the first kayak is loaded at chest height. It is much easier to tighten the J bar straps in this position. You can say goodbye to struggling to uncross jammed straps where they loop through the top of the J bar high above your head and on the far side of the kayak (as happens when J bars are fitted to a conventional roof rack). 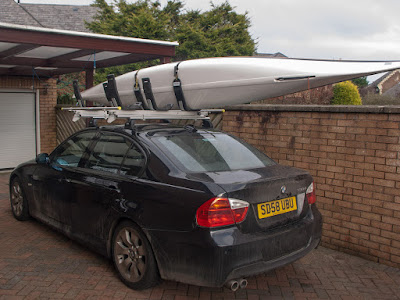 This is the really magic bit so watch very carefully.  You use the handle on the carriage to lift and slide the first kayak onto the roof before loading any other kayaks. You then put two more pins through the carriage between the first and second sets of J bars before... 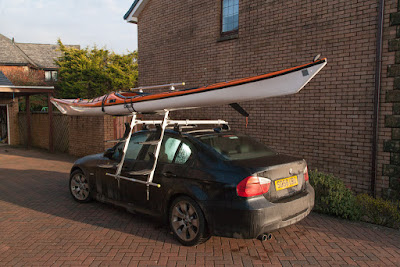 ...pulling the carriage back off the car roof and lower it back down again. 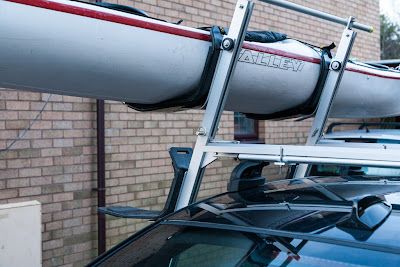 The extra pins stop the carriage sliding right down the side of the car. Not only does the kayak change into an entirely different kayak, it is now sitting higher than it was before. Being above the roller on which the carriage rotates, the first kayak now acts as a counter balance for any others that you add to the rack. If you are just carrying two kayaks the second will be perfectly balanced as you swing the carriage up onto the roof. 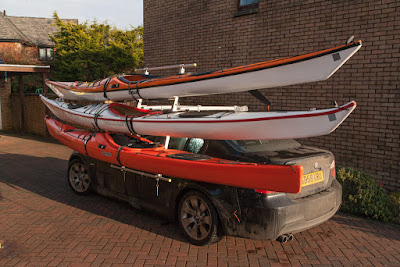 If you are loading three kayaks you are really just having to lift the weight of the last as the first two are counterbalancing each other on the temporary pivot. If you attempted to load all three in one go it would take a lot of grunt to slide them up in a oner! 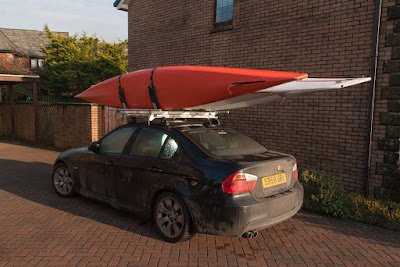 An easy lift and I now had three kayaks on the roof rack with minimal effort, no strained back and, most importantly, no dislocated knees or more dents on the car. 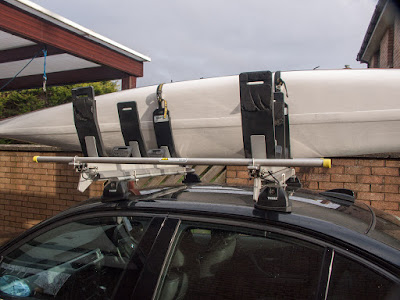 When loaded the kayaks are held securely in the J bars. You can either buy Kari-Tek J bars for the ELRR or Kari-tek sell adapter kits to reuse J bars from other manufactures, such as these KCS ones. I had to drill two more countersunk holes in the midline of the KCS J bars. Kari-tek thoughtfully supply a paper template to position the new holes.

The J bars are secured by two bolts and captive nuts which slide into the upper channel of the carriage. When travelling the carriage is secured by spring loaded locking pins which go right through the carriage rails and through the triangular aluminium plate, which is bolted to the runner bar on the roof rack. These locking pins are the only metal parts of the rack that are not corrosion resistant aluminium, stainless steel or brass. The pins are plated but it would be worth spraying them with something like Corrosion Guard.

On the road, the rack holds the load securely and there is little increase in wind noise compared with just crossbars and J bars. There is minimum bounce even on bumpy, rutted roads. With at least one kayak on the rack there are no rattles but if you leave the carriage with the J bars on the rack when unloaded, it does rattle. The noise comes from the passenger side of the carriage in the region of the brass rollers. This is easily fixed...

...by wrapping a bicycle toe strap with quick release buckle round the carriage and the runner bar at the passenger side.

Conclusion.
This is an ingenious, superbly engineered and effective solution to getting kayaks onto a car roof. At £335 I think it is superb value for money (but note that you either have to use your existing J bars or buy some more). Once loaded the kayaks are held securely and safely. Any small or older person should have one of these but I would go further and say that any fit kayaker that ever needs to load a kayak on their own should have one. I am aware that even a decade ago I was straining myself and risking injury every time I loaded a sea kayak on my own.

My recent sea kayaking opportunities have been restricted by increasing disability. This rack has allowed me to overcome the single most difficult physical barrier on a sea kayaking trip. It has given me back my freedom to go sea kayaking. I have no option therefore but to award the Kari-tek Easy Load Roof Rack 12/10.

If you are young, big and strong I would reduce that score to a mere 10/10. Even so you should buy one now before you become young, big, and formerly strong with a bad back!