Seeing the West coast in a new light. 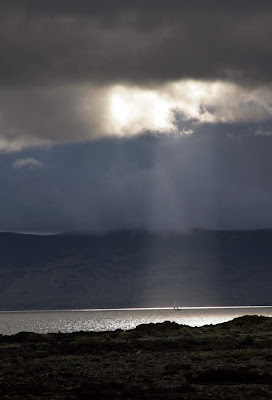 I have sailed extensively throughout the west coast of Scotland since 1959. This has been in a variety of dinghies and yachts such as a Wayfarer up to a 38 foot mono hull. I thought of those days last Sunday as I watched this yacht sailing right down the middle of the Sound of Bute, between Bute and Arran. I then realised that I had seen much more of the west coast in 4 years sea kayaking than I had in over 40 years sailing. Just looking at the yacht, I realised they had missed exploring the skerries, seeing the golden eagle, finding the rhyolite pebble and bat and ball and exploring for the Queen's glass covered tomb (more of which later). Not only that did you know that decent antifouling costs £90 per 2.5l tin and you need several tins?!
Posted by Douglas Wilcox at 11:02 pm 9 comments: