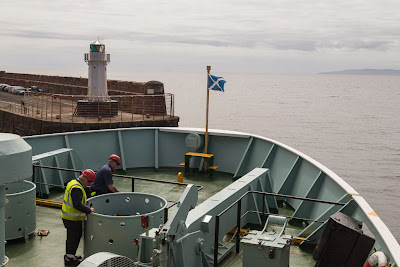 Calmac recently launched a new service from Ardrossan on the Ayrshire coast to Campbeltown on the distant (by road) Mull of Kintyre. It is a pretty limited service but the ferry that left at 1330 on Sunday and arrived at Campbeltown at 1630 looked interesting and avoided a crack of dawn start. We decided to leave our cars in the manned 24 hr car park at Ardrossan ferry terminal and buy single tickets to Campbelltown and paddle back to Ardrossan.

The girl at the check in desk was somewhat surprised, "You are the first people to buy single tickets. Most people want to come back from Campbeltown!"

We wheeled our kayaks on trolleys onto the car deck of the MV Isle of Arran and soon... 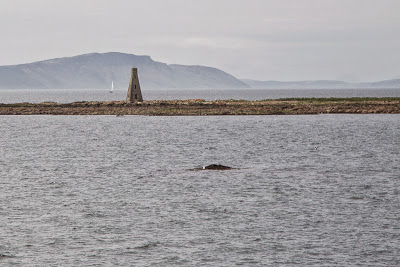 ...we were steaming past Horse Island which lies off the entrance to Ardrossan harbour. Its distinctive now unlit tapered beacon was built in 1811 after many shipwrecks on the isle. It is 52 ft high and 19 ft square at ground level.

We ate an early meal on the ferry as the plan was we would paddle 28km south from Campbeltown (until about 10pm) that night. As the ferry approached the town's south pier we spotted the... 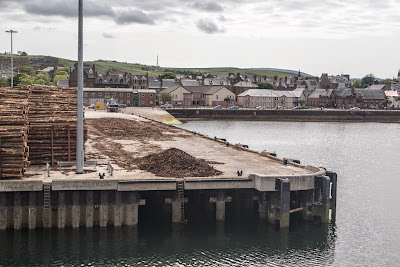 ...slipway that we would use to launch. 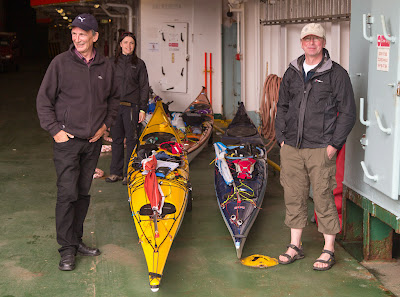 When the call came for drivers to go to the car deck, Phil, Jennifer, Mike and I ambled down to our preloaded kayaks. 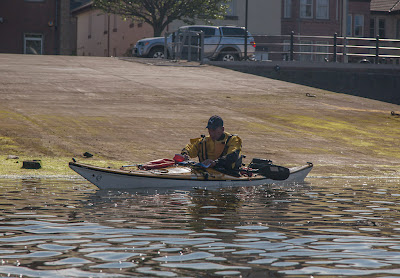 We found the slipway without difficulty, and were on the water by 17:05. HW was at 20:19 so we did not think we would be ble to paddle between tidal Davaar Island and the mainland. This would add 2km to our route. 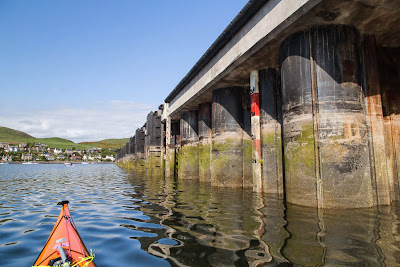 The new quay is a very impressive development for a small place like Campbeltown. It was built for the wind turbine factory at Macrihanish but that is now closed. It is hoped that Campbeltown might be a base for the servicing of huge offshore winfarm developments off Islay, Tiree and in the Clyde. Of course the new Calmac ferry service uses it but after the ferry left, we four sea kayakers had pretty much to ourselves. 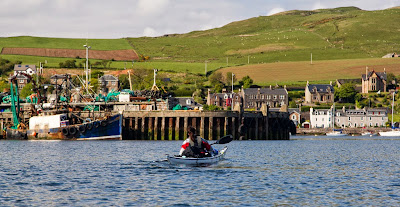 Soon we left the Old Quay and... 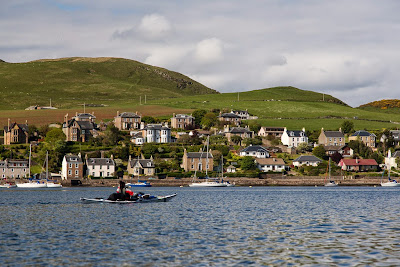 ...the douce villas of the wealthy Victorian merchants, fish merchants, boat owners, distillers and shipyard owners of this once thriving town. It grew in the days when commerce and travel were by sea but with the development of road transport it became just too remote and its wealth faded.  Perhaps the reintroduction of the ferry service will inject new life into this lovely corner of Scotland. 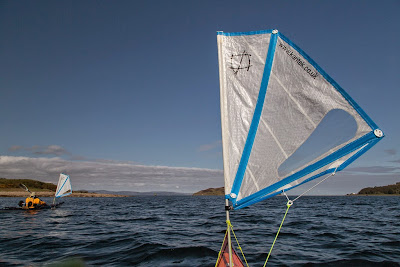 As soon as we were clear of the quays a decent west wind got up and we were surrounded by diving gannets. We hoisted sails and set course for Davaar Island at the entrance to Campbeltown Loch.
Posted by Douglas Wilcox at 10:53 pm No comments: