Taking the rough with the smooth in the Sound of Canna. 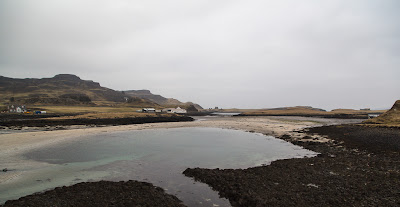 By the time Ian and I returned to our camp site on the south side of Canna, the ebb was well established and Canna harbour was well dry both to the east and... 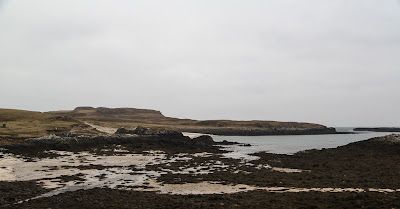 ...west of the foot bridge to Sanday. This meant that we would need to launch to the west of Sanday and paddle along its exposed south shore before crossing the Sound of Canna back to Rum.

To the west of Sanday the coast is sheltered by a series of offshore skerries but in the distance big water was breaking on the rocks of An Steidh to the south of Canna. The wind had not dropped as much as we had hoped. The wind was SSE F3-4. The XC weather forecast for the afternoon at Canna was S F4 and the BBC coastal forecast for north of Ardnamurchan Point was SSW F4-5. Off the east end of Sanday the ebb tide runs SW at 4- 5 knots springs  between Canna and Rum and an E going eddy runs along the south side of Sanday to its west end, where it joins the main SW going race. To add to this the air temperature with wind chill was -5C, though the sea temperature was a balmy 7C in comparison.

We set off through the skerries to the west of Canna in the last third of the spring ebb tide. At first we were sheltered by the skerries but even so it was bitterly cold. 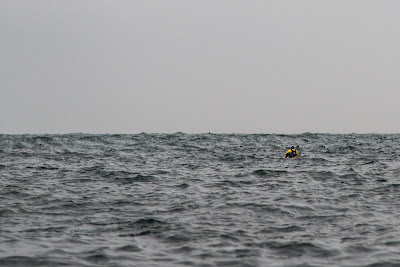 This is what we met as soon as we left the shelter of the reefs. A 2 meter SW swell was creating a lot of clapotis as it reflected off the cliffs and met the wind blown chop from the SSE. The east going eddy managed to stir things up a little further.

Ian and I paddled side by side so that we could keep an eye on each other. I found it impossible to take photographs. I had a head-band mounted GoPro in my forward day hatch but felt unable to get it out. I didn't want to risk rafting up with Ian as heavily loaded kayaks can be lethal to hands in those sea conditions.

There are some great caves on the south coast of Sanday but needless to say we kept well out! As we approached the west end of Sanday, the swell built up as it became compressed in the funnel between Sanday and Rum. Ahead we could see confused water where the two tidal streams met. Then we were in the thick of it with water tying to leap off the surface of the sea. Despite the waves and swell we could see and feel huge swirls in the water and sweep strokes and braces were the order of the day. For an hour the conditions had our full attention as we slowly but steadily crossed the tide race. 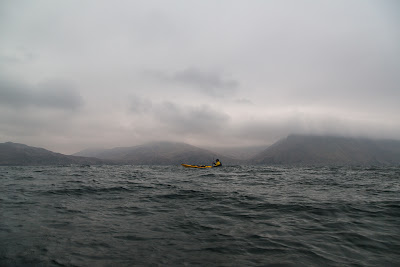 Half way across the Sound of Canna, we at last entered the lee of Rum. The sea conditions calmed as the Sound widened and the tide approached slack. This is the view up Glen Guirdil on Rum.  Guirdil Bay in front of the bothy was a mass of white water. We were so glad we had not spent the previous night there...we would have been trapped! 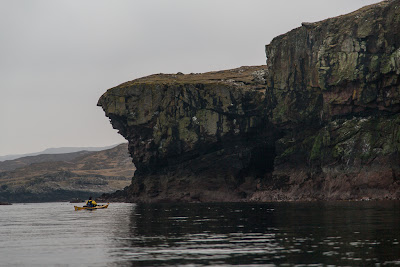 By the time we rounded the north end of Rum, we entered another World where all was calm. 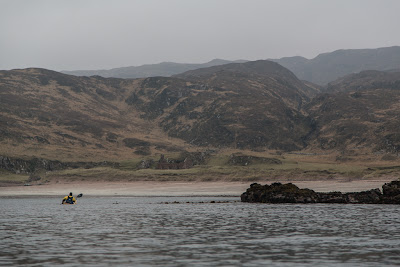 What a contrast! We paddled into... 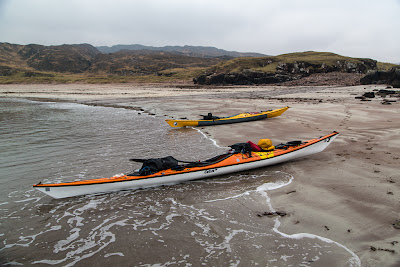 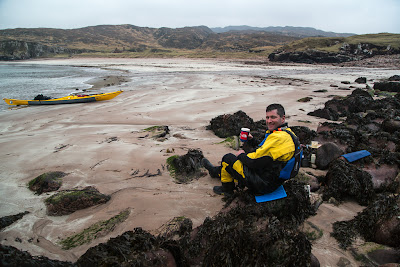 ...for first luncheon and a well deserved shot of Golden Steadying Liquid. 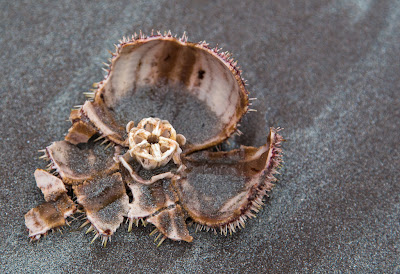 Sadly this sea urchin did not feel quite so refreshed.

Ian's account can be read here.
Posted by Douglas Wilcox at 7:00 am No comments: