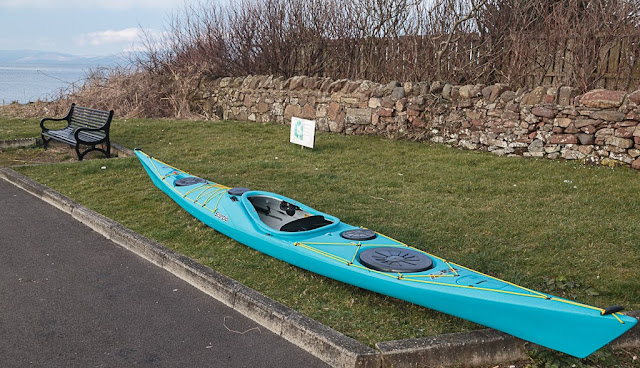 I have recently published a long term review of the Scorpio MK2 MV in the standard roto moulded plastic CoreLite. This proved to be the kayak I spent most time in last year, I liked it very much indeed. This new version in CoreLiteX promises to be both lighter and stiffer. Though I was away seakayaking for a week at the Glenuig Inn in NW Scotland at the time,  I was fortunate enough to get my hands on one of the first boats off the production line. This was courtesy of Mathew Wilkinson of P&H, Cam Allan of Gokayaking Perth and my regular paddling buddy Phil Toman who between them got it transported for me. Thank you all. 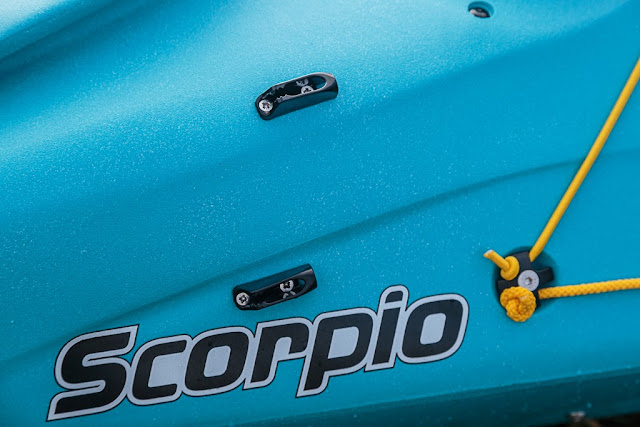 Unwrapping the boat revealed a blemish free exterior in a very fetching turquoise, which I think is just a little more vivid than the turquoise of last year's model. I particularly liked the use of yellow for the deck lines and elastics. The boat was already all fitted up for paddle sailing and It is the first time I have every unwrapped a sea kayak and then got it set up for paddle sailing in less time than it took to cut the wrapper off! 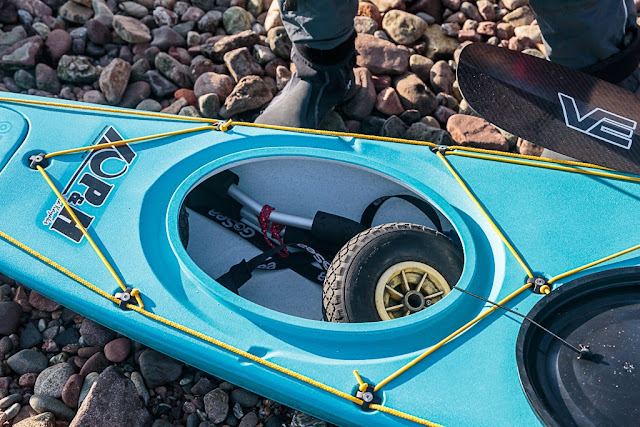 Inside the cockpit and the hatches was not quite so smooth as normal P&H RM finish because P&H are still tweaking the RM process for the new materials, which have different flow rates as they cool. 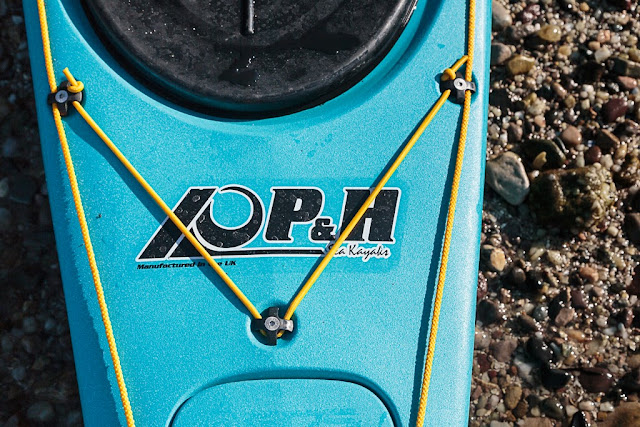 The overall weight of the test boat fitted with a skudder was the same as a composite Quest with a keel strip. As the moulding process is refined it is likely that production kayaks will be even lighter than the test kayak, 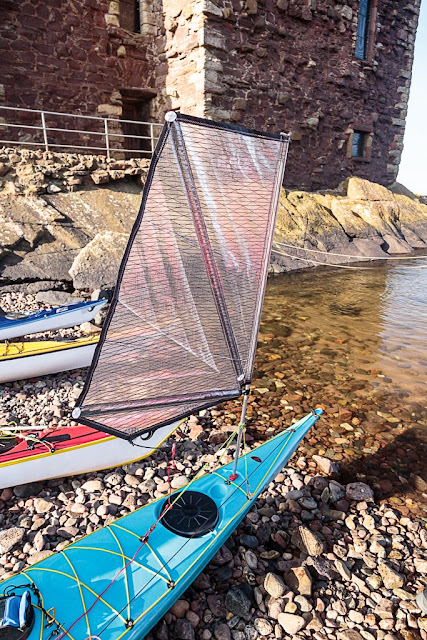 When two people carry a normal RM kayak to the beach a "boing" sets up as the kayak flexes up and down between the bow and stern as they walk. This CoreLite X Scorpio kayak did not do this. Remarkably, it felt as stiff as a composite kayak. 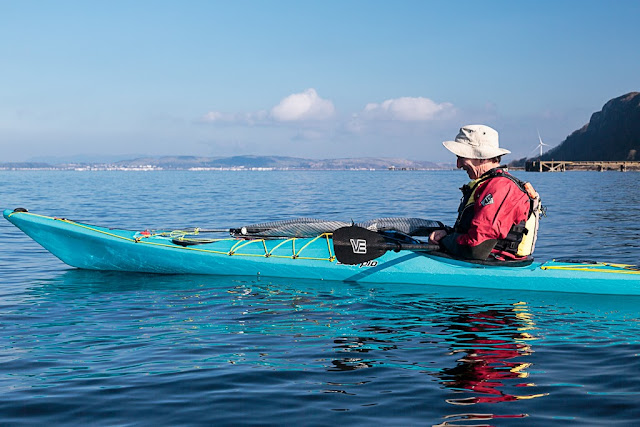 This initial testing took place on waters that were flat calm with zero wind to rough with F4 wind over tide conditions. Phil agreed to give up his beloved Quest and act as photographic model. He could not help smiling as he settled into the comfortable ergonomic cockpit. 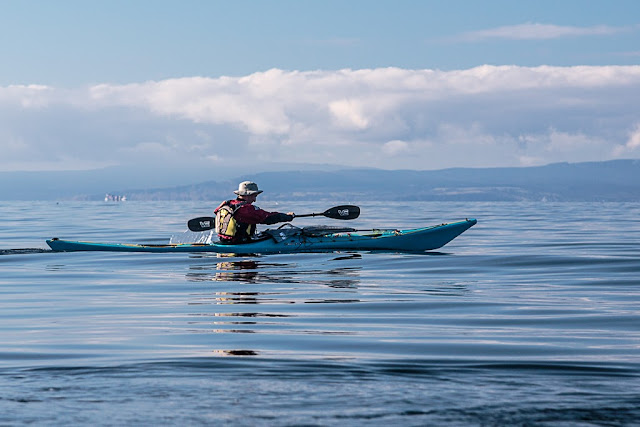 One thing I noticed with the standard CoreLite Scorpio Mk2 MV was that its maximum sprint speed was a bit down on my composite Cetus MV.  I think that as the boat flexed it absorbed some of my paddling energy that would otherwise have driven it forward. Phil is the fastest paddler in our group and he was keen to... 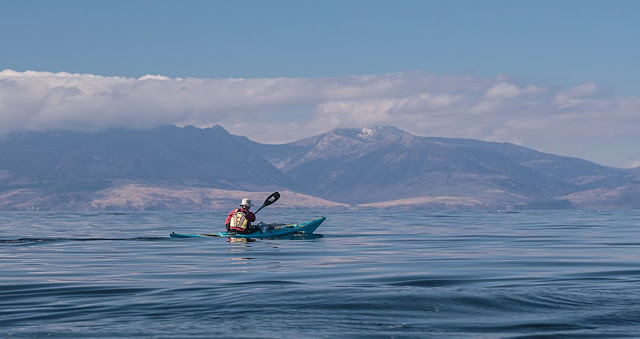 ...give the CorteLite X Scorpio laldy. He agreed with me that the stiffness on the water was unparalleled in a RM boat and Phil had no difficulty reaching his normal sprint speed. 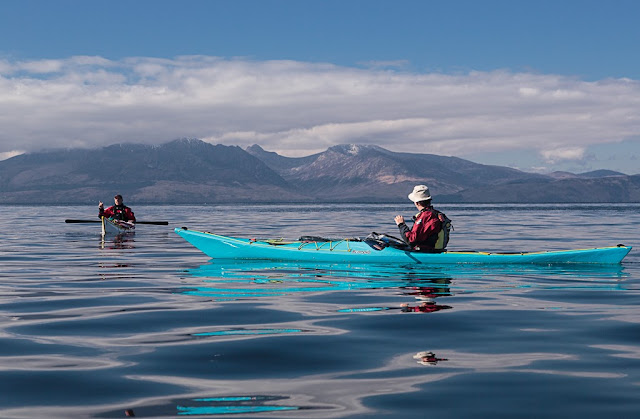 Fortunately for us he was enjoying paddling the new boat so much that he turned and came back. 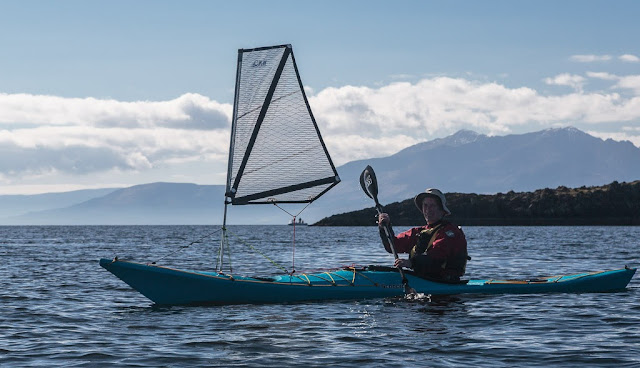 On our second island Phil and I swapped over and I put the CoreLite X Scorpio through its paces. Stiff, stiff, stiff was my overriding impression.

This boat came with skudder and the new P&H sail from Flat Earth, which appears to be identical to the FE TradeWind 80 design. (Previous P&H and FE designs in the UK have leapfrogged each other as new designs were introduced.) I will report back on this after further testing. 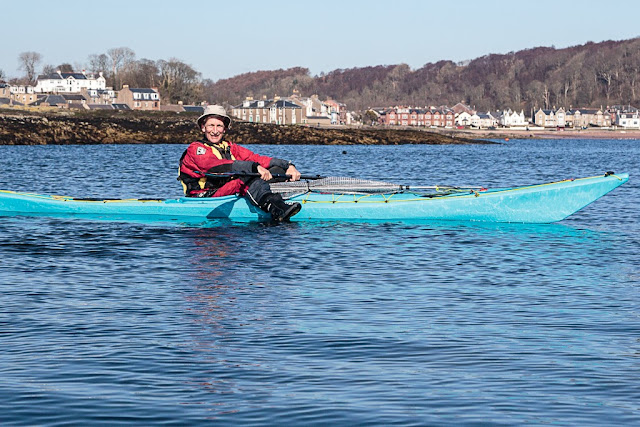 The large cockpit certainly makes it easy to get in and out of the Scorpio MK2 MV cockpit. Neither Phil nor I can do this in a Quest. 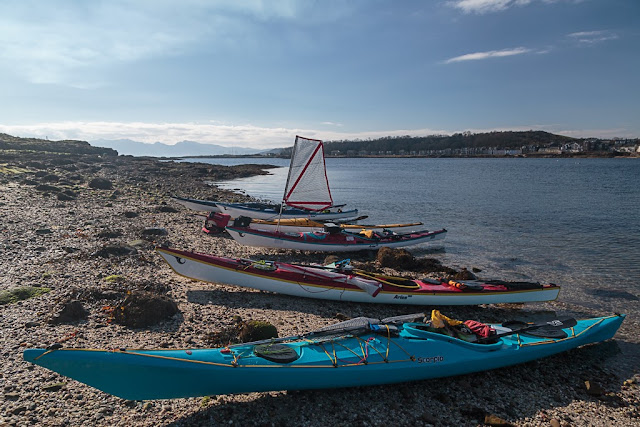 The clean lines and immaculate exterior of the Scorpio MK2 MV are not what you expect of an RM kayak. It looked just as good as the composite kayaks on the beach! 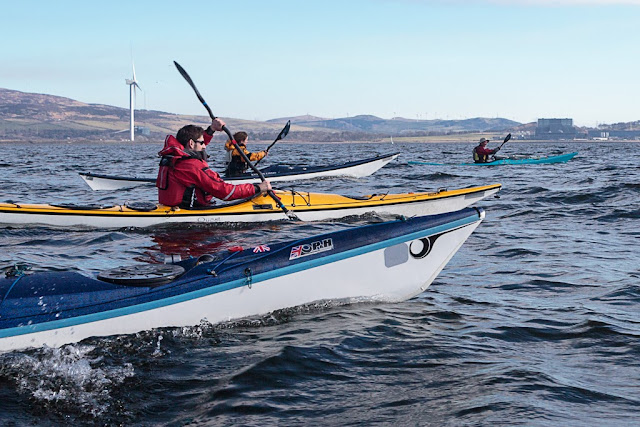 On a 3.5km paddle straight into a F3 wind, Phil in the CoreLite X Scorpio again shot ahead of the composite boats and... 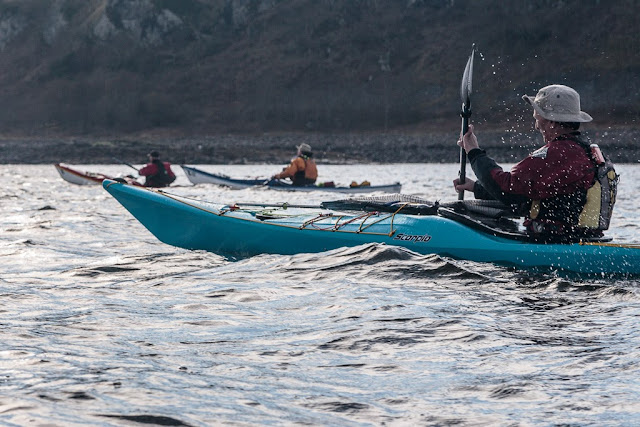 ...I had to persuade him to slow down for some more photos.

After a final stop on an island we agreed that Phil and Maurice would use sails on the final 3.5km crossing while the rest of the party would paddle across at a more leisurely pace. 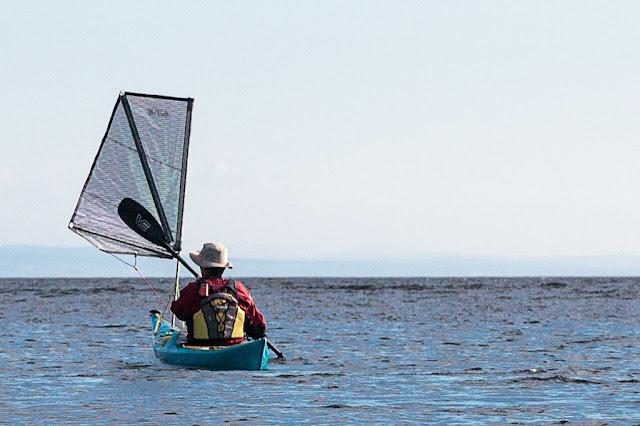 This was Phil leaving the lee of the island. It was the last we saw of the paddle sailors till we arrived back at base. The wind increased to F4 against the spring ebb tide and it got rough. I have no photos of this as I was using my Canon 5d mk3 (which despite its price, is decidedly non waterproof). The paddlers found the conditions exhilarating but the paddle sailors had an absolute blast. Phil said he never once felt he was in a poly boat. Despite steep confused waves, he was aware of no flex in the CoreLite X Scorpio. All he could think about was that he was going faster, where he wanted to go and in more control than he could have managed paddle sailing his composite Quest. 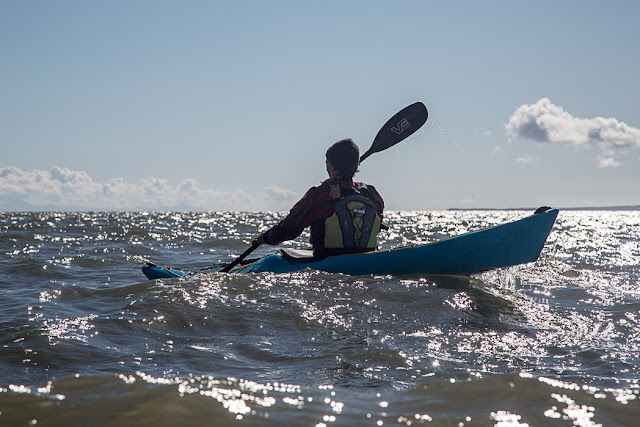 In short steep waves on the Solway... 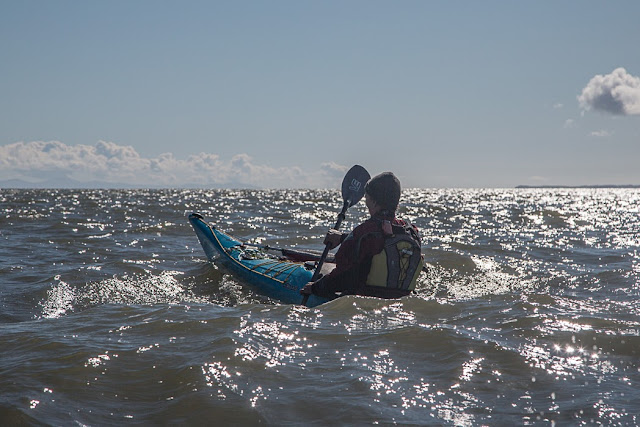 ...the stiffness of the CoreLite X really shone through and... 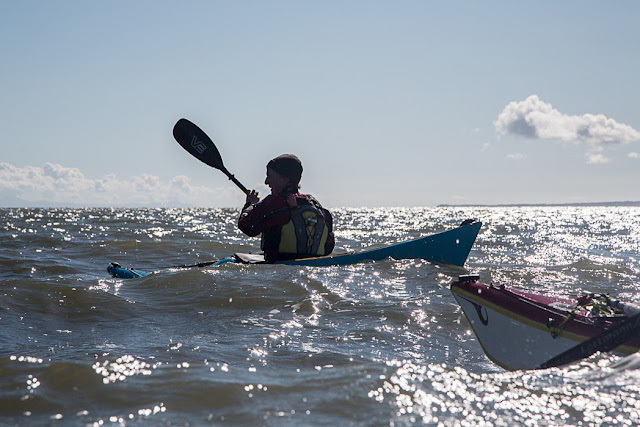 ...the Scorpio gave nothing away to the composite boats. 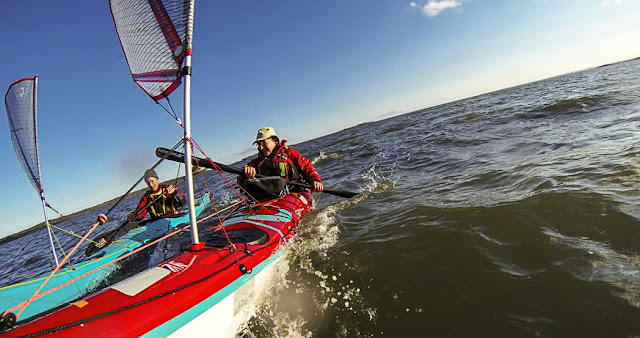 The stiffness of the CoreLite X also benefited the Scorpio Mk2 MV's performance with a sail. Every gust drove it forward rather than wasting energy bending it. The CoreLite X and composite boats were paddle sailing neck and neck.

I have the demo boat for at least 3 months and will report back further at the end of the test period. One thing that Phil and I both noticed was that the seat did not seem as comfortable as that in the Scorpio Mk2 MV in standard CoreLite which I returned to P&H in January 2016. As the kayaks are supposedly identical, some further investigation was called for. It turns out that the seat had not been fitted square in the boat. The seat was one notch forward on one side. These adjustment notches are not designed for user adjustments. They are for the manufacturer to fit the same seat to different kayaks. It proved to be a real difficult, expletive laden job to straighten it out. This boat was one of the first batch to be sent out to coaches, testers and team paddlers and I have to admit I was guilty of badgering for early delivery. It is something P&H will need to watch out for once commercial production and deliveries start.

This is my first overall impression of CoreLite X construction:
I think that given the demo CoreLite X Scorpio's outstanding stiffness and resistance to flex that one of the traditional reasons for choosing a composite boat over an RM one has now gone. Indeed if P&H can reproduce the weight/stiffness ratio of this test boat into full scale production then I believe they will have achieved a major step forward in kayak construction. The main reason for choosing a composite boat over RM (CoreLite X) may become dependent on how badly you want a glitter finish!