All good sea kayaking blogs should carry instructive posts on technique. Today I have decided to tackle the important skill of ferry gliding in strong winds. I hope I am not presuming too much in that at least some readers will benefit from my experience of this issue. 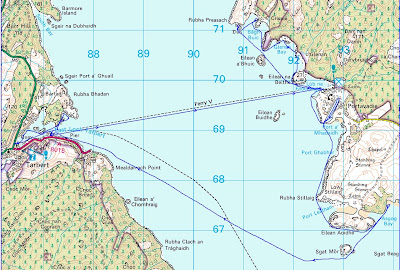 On Sunday David and I went to Loch Fyne. I was a bit tired after a 30 km paddle round the Mull of Galloway the previous day. There was only two of us, so we took the Aleut Sea II double. Normally people don't come with us if we take the double as it can be quite fast.

It was quite breezy with a force 5 to 6 SE wind blowing up the loch. We pottered around in the shelter of the east side of the loch. There was a lot to keep us occupied, a vitrified fort, an old jetty, lovely sandy bays backed by indigenous woodland, little islands off shore and the biggest man made hole in Europe (830,000 cubic metres). We stopped for several luncheons, the last at lovely Ascog Bay but then I got a bit bored.

Looking out into the loch I noticed the wind and the driving waves heading straight downwind towards Tarbert. Goodness me, Tarbet has pubs and an ice cream shop! Then I remembered a chat with the guys from Stornoway canoe club. They are right into paddling downwind in the long sea Lochs of Lewis. A cunning plan was therefore hatched; to partake in some refreshment and gelati at Tarbert. 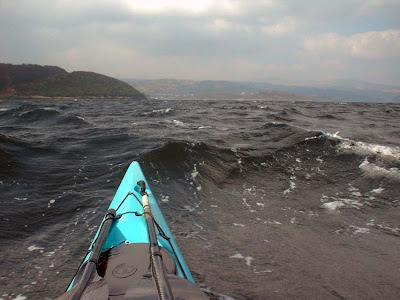 It was quite breezy and we covered the 8km at an average speed of 10.6km/hr with a maximum speed of 16.9 km/hr. The photograph does not really do justice to what the sea felt like. Despite paddling downwind, our paddles were being snatched by the wind. The waves were short and steep and did not seem to fit the length of the Aleut very well. One moment I would be surfing with free air under my seat in the front cockpit. The next the bow was buried up to my spraydeck with the rudder trying to get a grip in the air. With the boat threatening to broach we had to paddle like.... well vigourous sweep strokes were required! 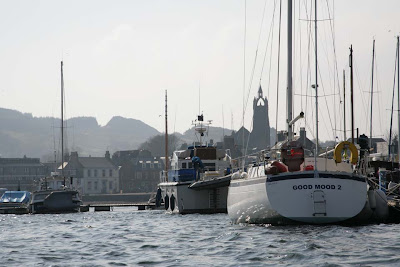 I was quite tired by the time we got into the shelter of Tarbert. 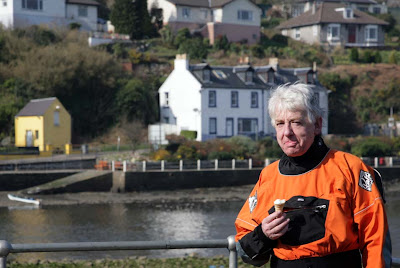 Suitably refreshed we thought we had better make a start on the return journey. I noticed that the wind had now backed round to the east and was now straight in our teeth for the crossing back to Portavadie. 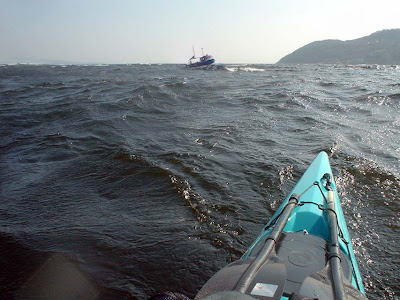 Paddling out of the shelter of East Loch Tarbert I noticed the line of breakers out in Loch Fyne. I also noticed the fishing boats were all returning to port. To make matters worse, paddling at full speed we could only make just over 2km/hr and that was before we hit the waves out in Loch Fyne. I stopped paddling to take the photo above and the wake shows we were going backwards despite the fact that David was still paddling like... well quite hard. A near 3 hour crossing at the end of a tough weekend's paddling did not hold much attraction. Then I saw a ship! A new plan, we turned our bow back towards Tarbert.... 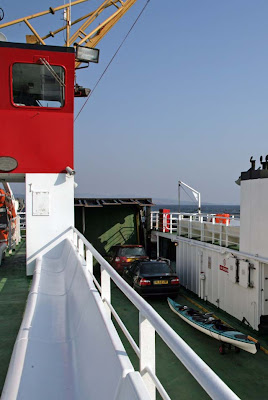 We had a very pleasant ferry glide home on MV Loch Riddon.
Posted by Douglas Wilcox at 10:19 pm 11 comments: