Ian and I still had some time before the ferry arrived to take us back from Muck to Mallaig via Eigg. We decided to take the short walk across to the north side of the island. Ahead of us the brooding Cuillin of Rum slowly emerged from... 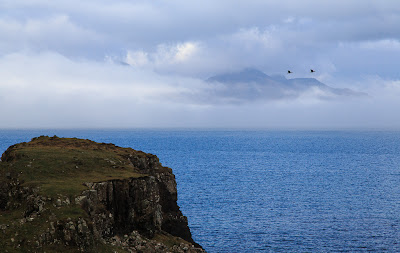 ...the cloud that was enveloping the island.. 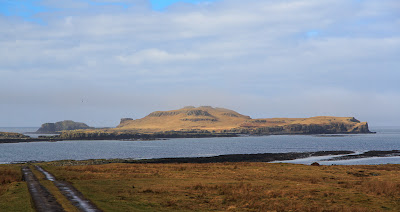 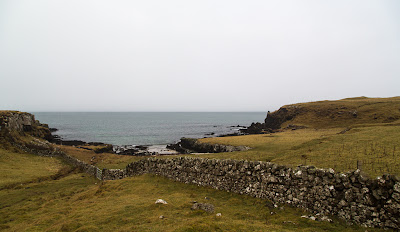 We soon passed Camas na Cairidh, where we had made landfall on Muck less than 24 hours before. 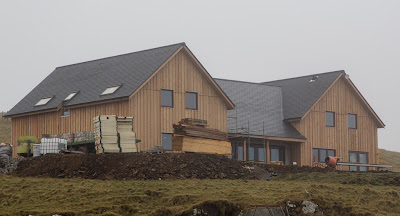 Gallanach Lodge is the new hotel on Muck and will open at the end of May 2013. 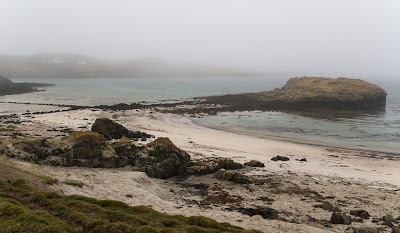 A few moments after passing the Lodge we arrived at the beautiful Gallanach sands. 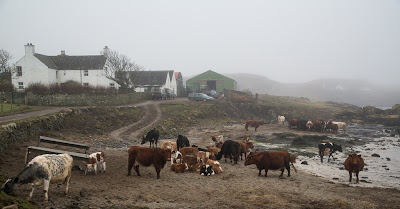 Though tourists would need to be prepared to share the beach with the local residents at the west end of the beach. Mr MacEwen the farmer and owner of Muck gave us a welcoming wave as he passed on his quad bike. Unlike nearby Rum, which was closed to visitors, Muck has welcomed visitors and offered them free access for decades before the Scottish Land Reform Act guaranteed access to Scottish wild land for responsible visitors. 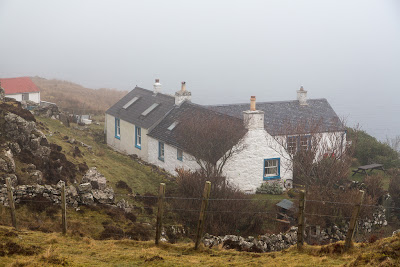 Just past the bay and farm we came to Gallanach Cottage which is available to rent. 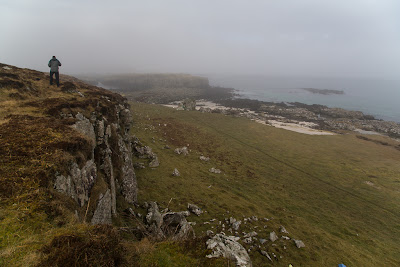 Ian and I then took a short walk to the north end of Muck. I found the ground to be too rough along the coast so... 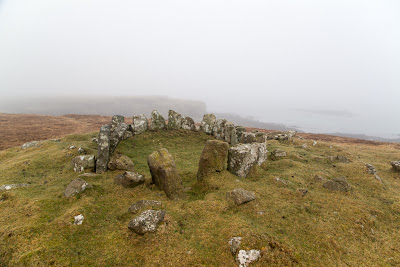 ...we walked along the short turf on the crest of the ridge where we came across some gravestones. 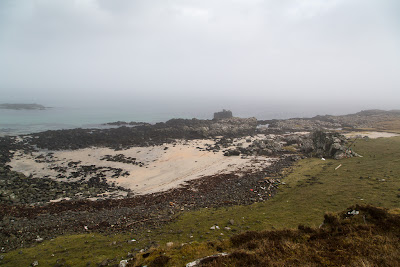 There are a number of idyllic beaches here but we did not scramble down to them as my knees were really sore and we still had to get back to Port Mor... 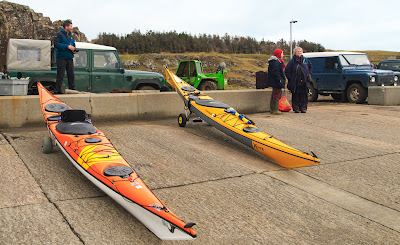 ...Terminal 1 where the crowds were already gathering for the arrival... 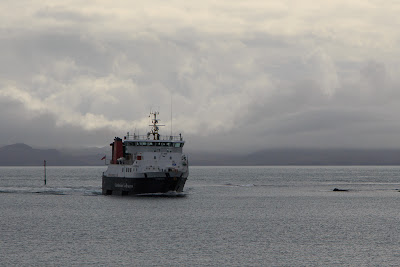 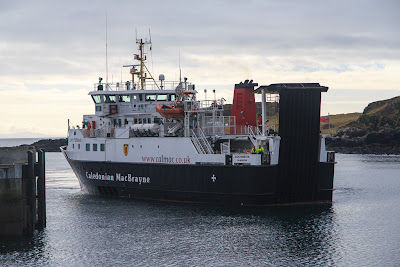 The MV Loch Nevis reversed in and we pulled our kayaks up her stern loading ramp. The crew were most interested to hear how we had got on particularly as we were the first sea kayakers of the season. 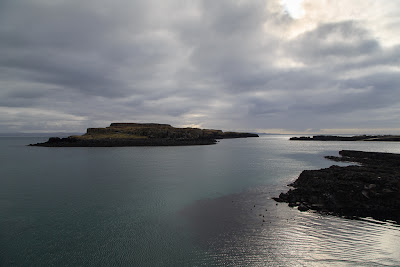 The MV Loch Nevis called in at the new ferry terminal on Eigg after passing through the narrow channel between Eilean Chathastail and the mainland of Eigg. 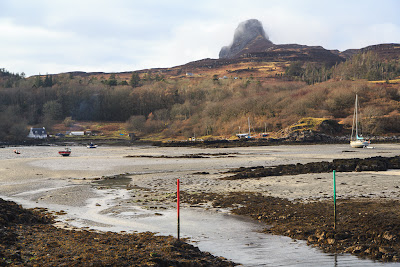 The old tidal  harbour can still be entered behind the new jetty though the channel between the perches is neither wide nor deep. 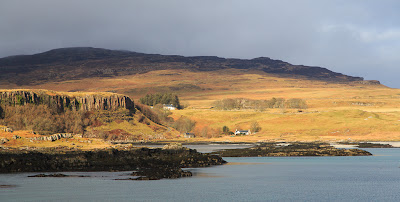 As we left Eigg the low winter sun briefly lit the wonderful landscape before the clouds gathered round... 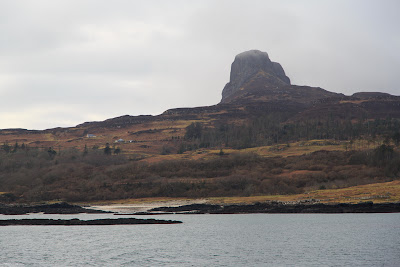 ...the Sgurr of Eigg and sea fog rolled round...

...the north end of the island. With a chill in the air we went below to... 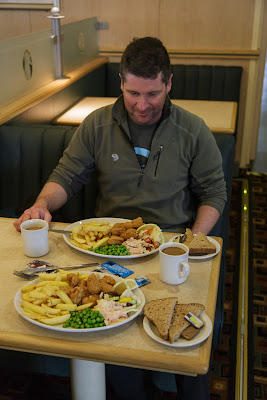 ...enjoy a huge plate of scampi and chips. 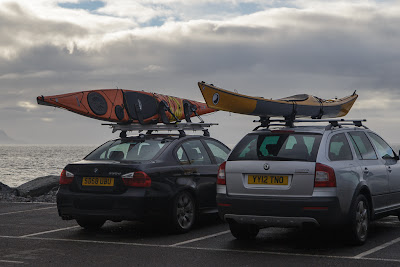 All too soon our Small Isles trip was over. The crew kindly helped us pull the kayaks up the steep ramp then we loaded the kayaks onto the cars, which we had left at Mallaig sea front.

Ian and I had both enjoyed this trip immensely.  Neither of us is goal orientated. We just went paddling for an enjoyable kayaking exploration. Amazingly however, we had paddled between all four of the Small Isles and spent a night on each on a winter trip. A key element in this was flexible planning, we changed plans several times to take account of changing conditions. It would be fair to say that some of the options we had changed to, had been considered at the planning stages before we set off.

We had met many interesting and genuinely nice people. It was fascinating to hear how each island community was working for its development and future. We had faced everything from flat calm and fog to some of the roughest wind against tide conditions you would care to spend any time in, in a remote place in winter. Ian and I were also fortunate in that we shared such a similar attitude to trip planning and risk assessment. Ultimately the trip was all the richer for each of us, as it was a shared experience.

It is always good to follow a story from more than one perspective. Ian's story can be followed fom here to here. 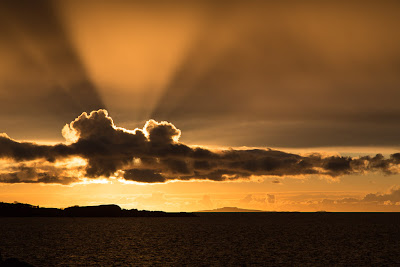 As we drove home on the Road to the Isles, the sun set behind Muck and we knew we would return soon.