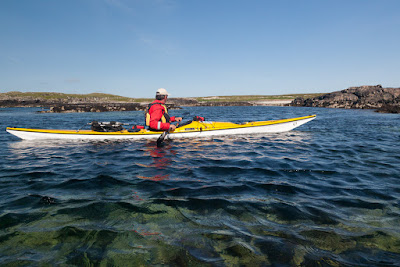 The final day of our Tiree adventure dawned sunny... 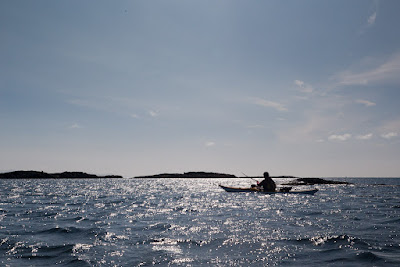 ...but with a continuing fresh NE wind. We paddled our sea kayaks through gaps in the skerries... 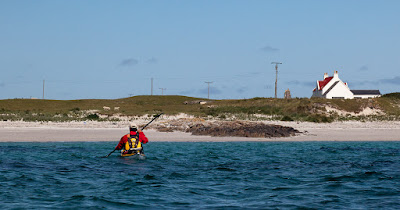 ...and hugged the south coast for shelter. We explored each cove, like this one at Heanish...

...then took a detour into Scarinish old harbour. It was once the main port on Tiree but the modern ferries required deeper water so the new jetty and pier was built 1km away to the NE. Unfortunately it was too early for the bar at the Scarinish Hotel to be open... 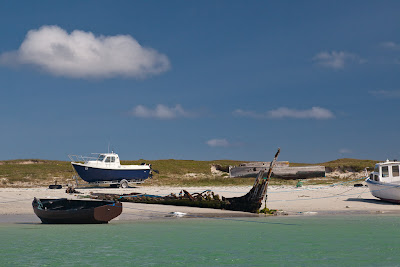 ...so we rested for a while in the shelter of the harbour, out of the wind. We paddled slowly round the bay inside the harbour past the wreck of the Mary Stewart. She was a 20m topsail schooner and has rested here since 1938. She was registered in Ardrossan but based on Tiree. She had  traded coal and other cargo on the west coast of Scotland for 30 years. The Mary Stewart was actually an anachronism in the 20th century as by that time, most of the west coast sailing smacks had been replaced by steam puffers. 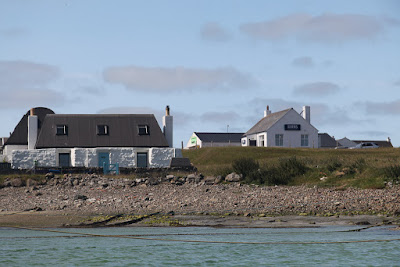 Originally this croft would have had a thatched roof. Note how the roof does not overhang the walls. Tiree is so windy that the wind could catch an eave and lift the whole roof off. The traditional crofts had thick double walls with the gap filled with sand. The roof joined the middle of the wall and rainwater percolated down through the sand between the inner and outer wall.

The Coop supermarket is on the hill behind and is excellently stocked with reasonable prices for supplying your visit.

Posted by Douglas Wilcox at 12:29 pm No comments: