An Orange future for Barra and Vatersay but not for me. 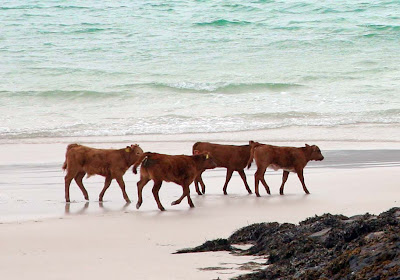 This photo is of red haired, celtic cows on Bagh a Deas on Vatersay, the most southerly of the inhabited isles in the Outer Hebrides. It is especially for Michael, Hayden and Wenley and is one of a series of sea cow photos I am posting on this site. 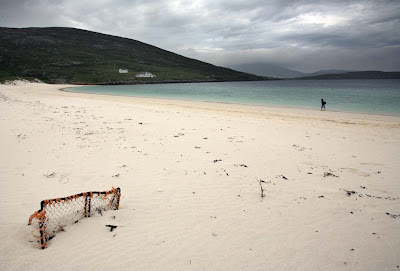 On sea kayaking trips to the Outer Hebrides I usually take three PAYG SIM cards for O2, Vodaphone and Orange and I usually get mobile phone reception in most places but until now, not on Barra or Vatersay.

However, Orange recently started work constructing mobile phone masts on Bruernish and Bentangaval. It was hoped the network would be available from 09/03/2007. The mast at Bentangaval will also be used for the deployment of services provided by Connected Communities Broadband to create a wireless Internet network on the island.

The future might be Orange for Barra but not for Newton Mearns on the south of Glasgow. On 17/1/2007, as a result of local loop unbundling (LLU), Orange installed their own ADSL broadband equipment to replace equipment they had rented from BT. Since then my broadband has been just about unusable with download speeds of about 100 kbps (instead of the theoretical maximum of 6,500 kbps) and frequent drops of the connection. After much frustration, yesterday I requested my MAC code to transfer to another ISP. I will not be going to one of the free bundles with other services such as Sky satellite TV. I will be happy to pay for a decent reliable service.
Posted by Douglas Wilcox at 5:35 pm 8 comments: