The Mull of Galloway, Scotland's most southern coast. 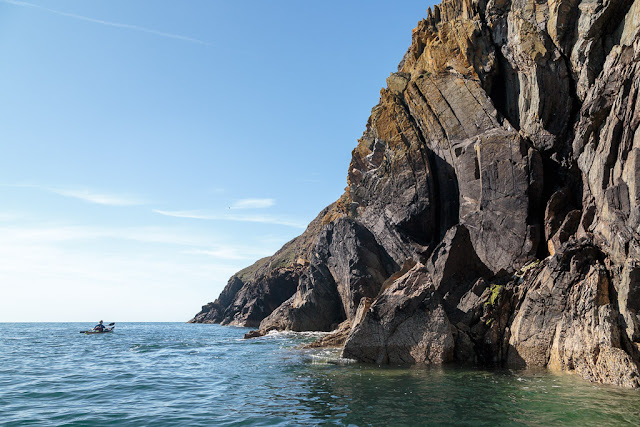 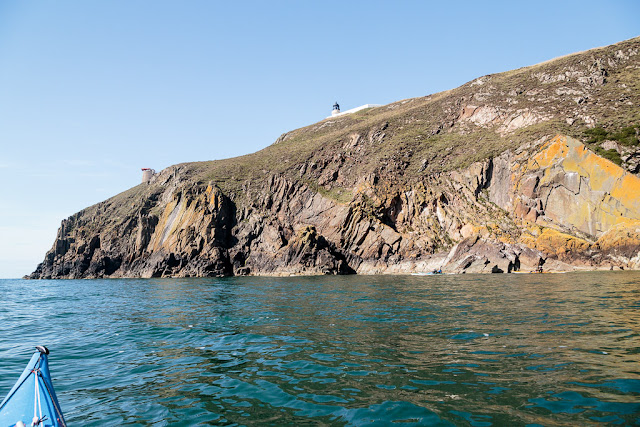 ...lies below the Mull of Galloway lighthouse and its foghorn. 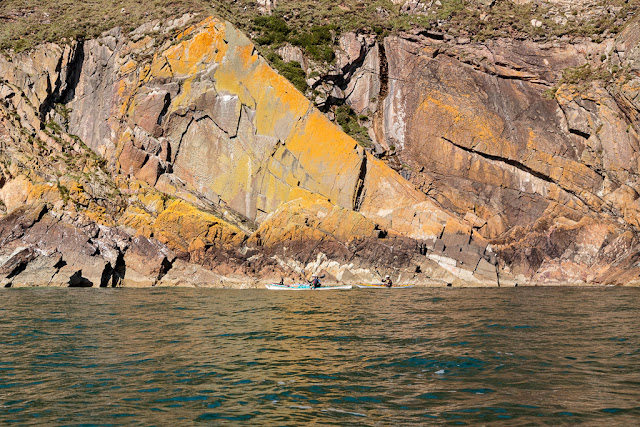 A characteristic feature of the Mull of Galloway cliffs is the bright yellow lichen. In spring and early summer this is spattered by the white of the sea bird colonies guano. 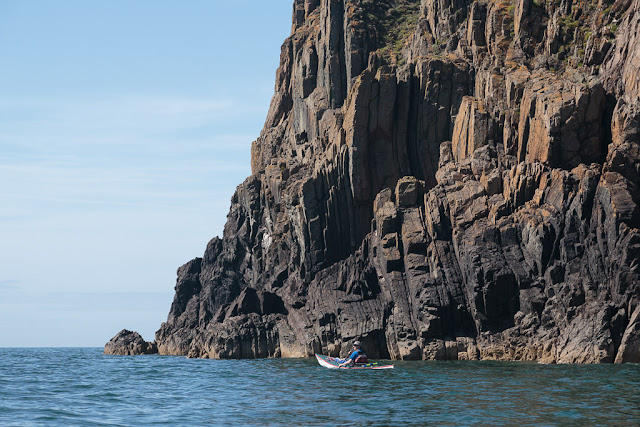 Carrickcarlin Point is one of the four most southerly points in Scotland. 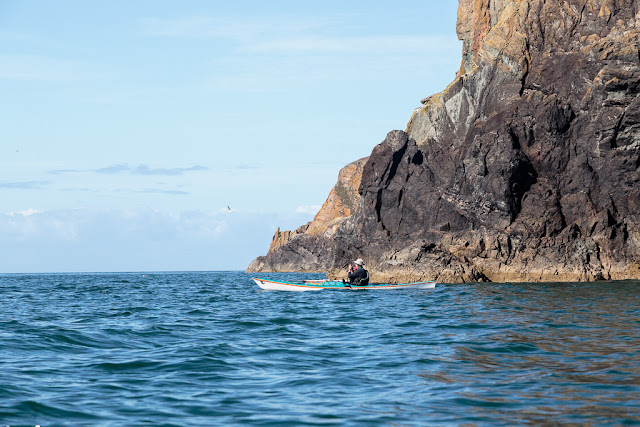 The south coast of the Mull runs east west and from Carrickcarlin Point in the east this is the view... 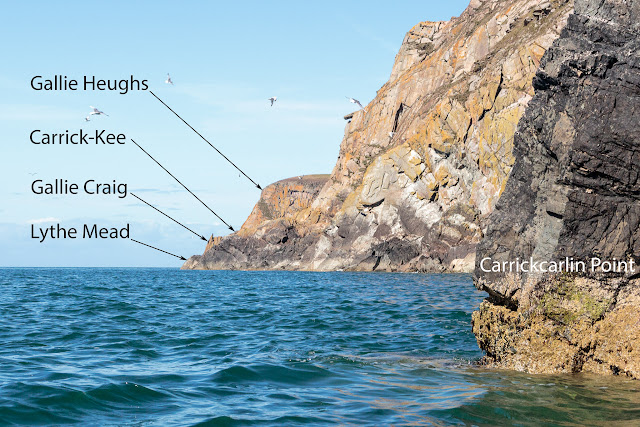 ...to the west showing Lythe Mead, Gallie Craig and just the shoulder of Carrick Kee. 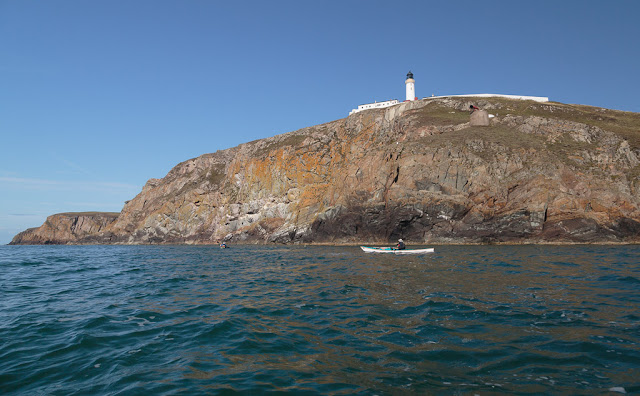 I paddled out to get a decent view of... 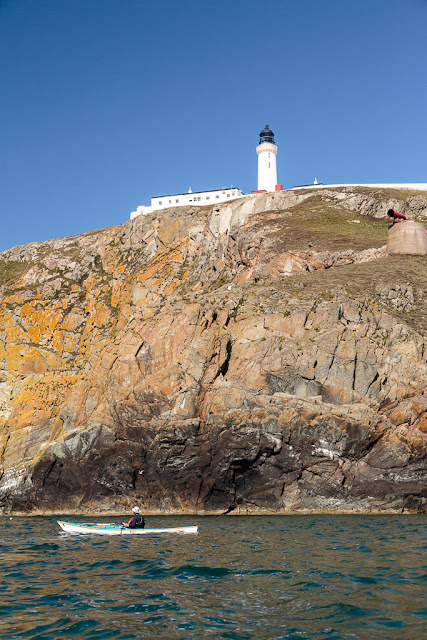 ...the lighthouse which is hidden from the base of the cliffs. 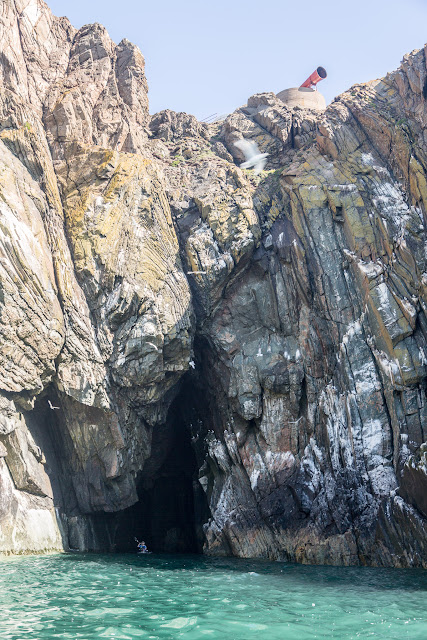 Below the foghorn is the entrance to... 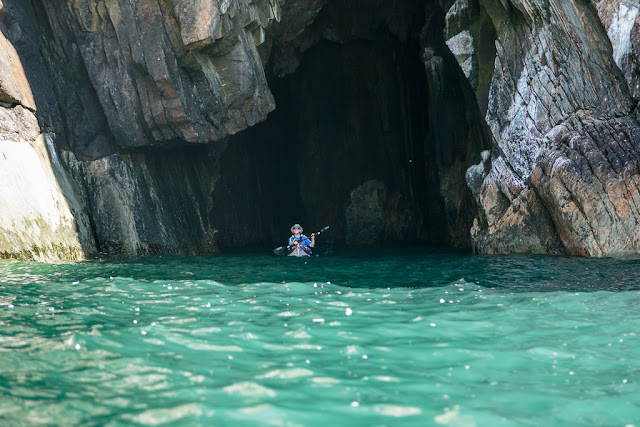 ...Seals Cave which is big enough to drive... 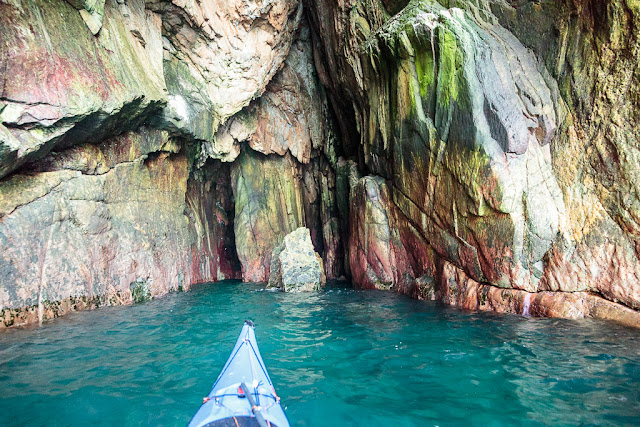 ...several double decker buses in. The depths of the cave were very colourful. 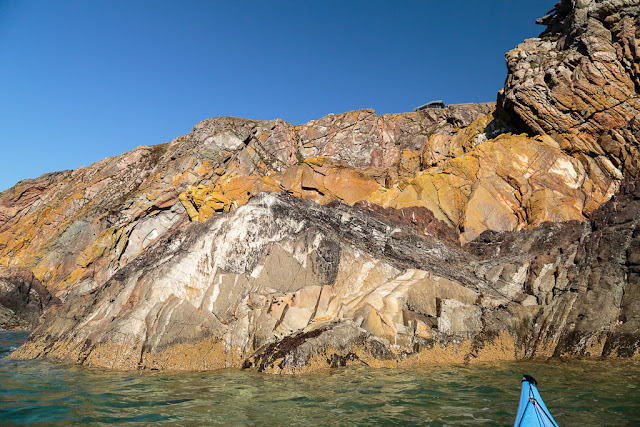 Lythe Mead lies directly below the visitor centre and unsurprisingly they claim this to be the most southerly point in Scotland. 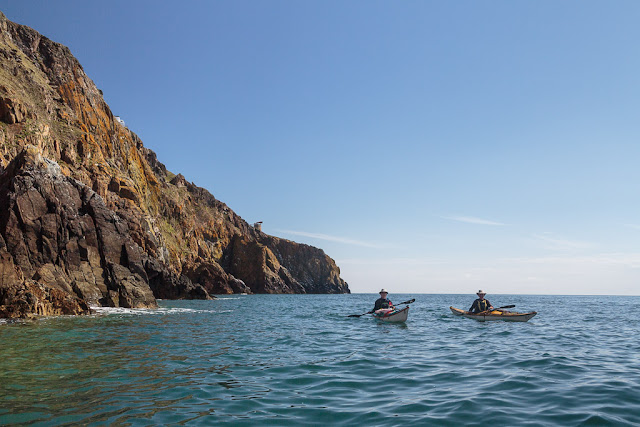 This is the view from Lythe Meade back east to Carrickcarlin Point. 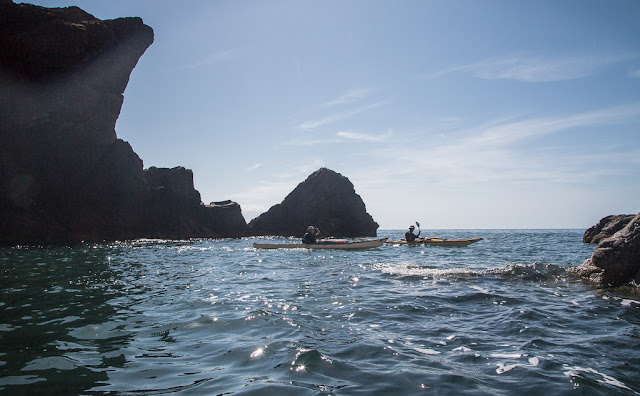 Beyond Lythe Mead there is a deep geo called Foxes Rattle. This is looking out at Lythe Mead and the stack Inchshannoch. 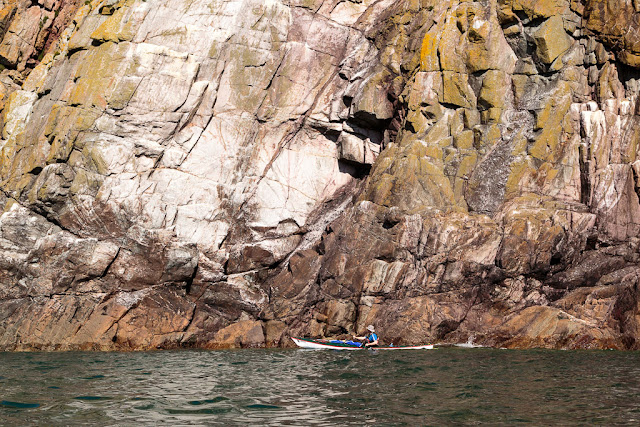 This is the head of the Rattle and... 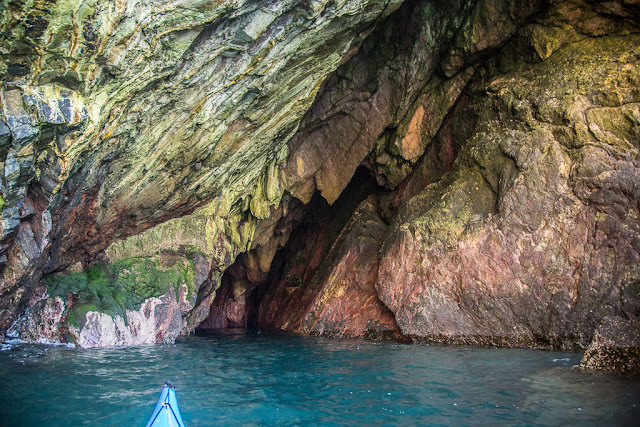 ...this is a cave in its north west wall. 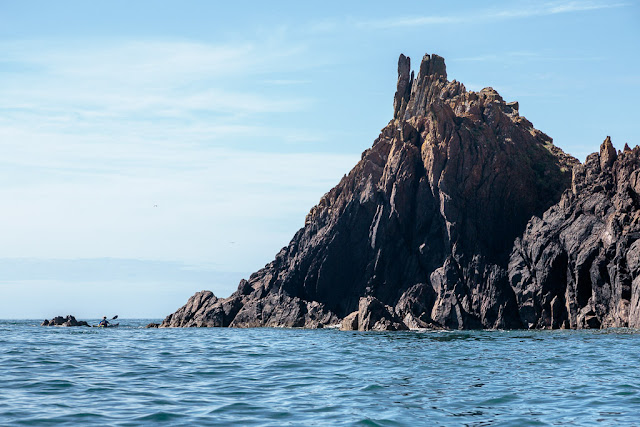 The next headland we came to was Gallie Craig. 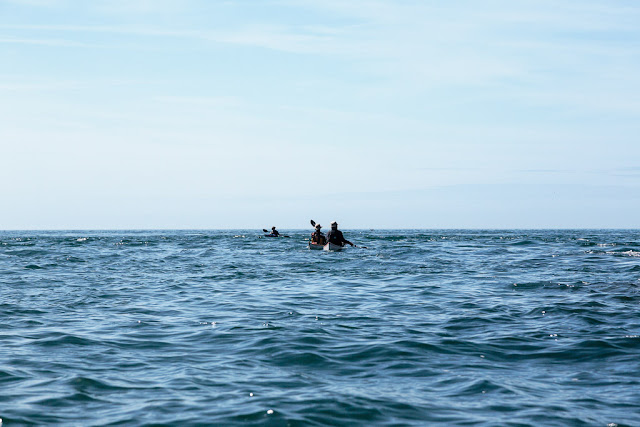 Beyond the Craig the tide was already running strongly towards the west. 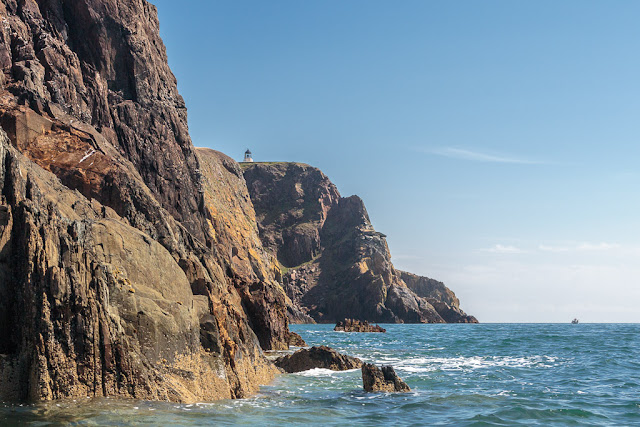 This is the view from Gallie Craig looking back... 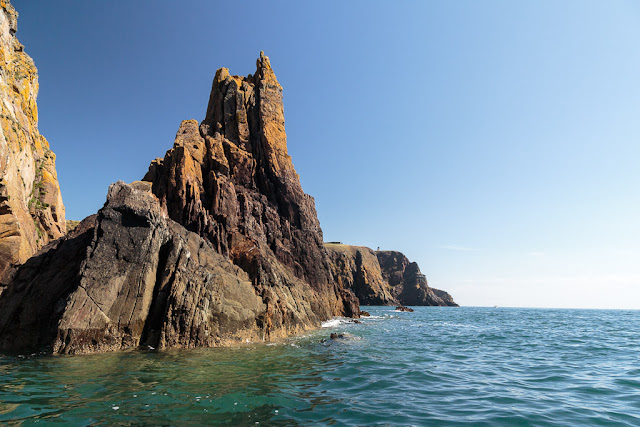 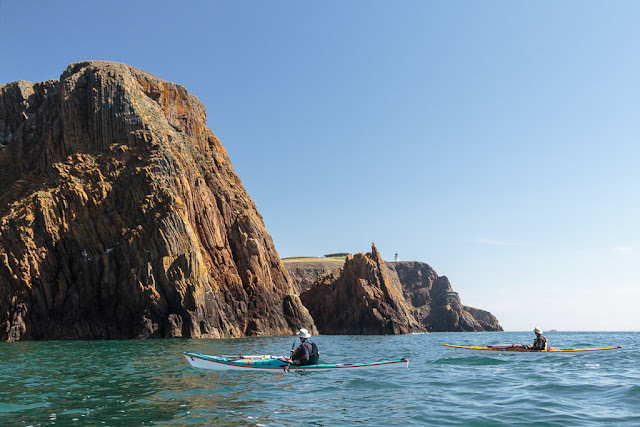 At the Gallie Heughs we got our last view back to the lighthouse which is hidden from view from... 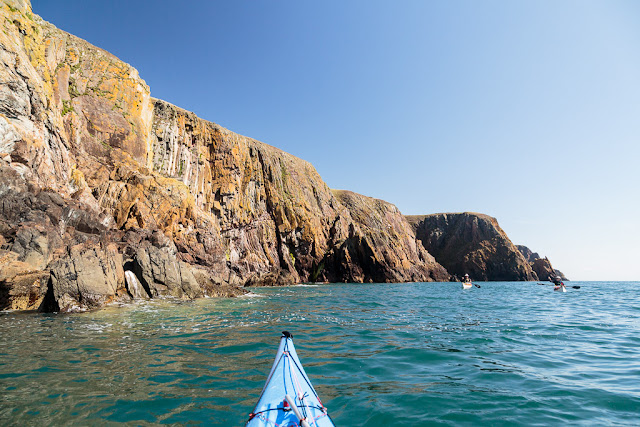 ...the fourth headland at Carrick-Kee. So which of these headlands is the furthest south? Well it is a close run thing but the sea was so calm I was able to touch each headland. These are the northings from my GPS unit:

So Carrick-Kee just makes it as the most southerly point in Scotland based on latitude. That is further south than the mouth of the River Tees on England's east coast! 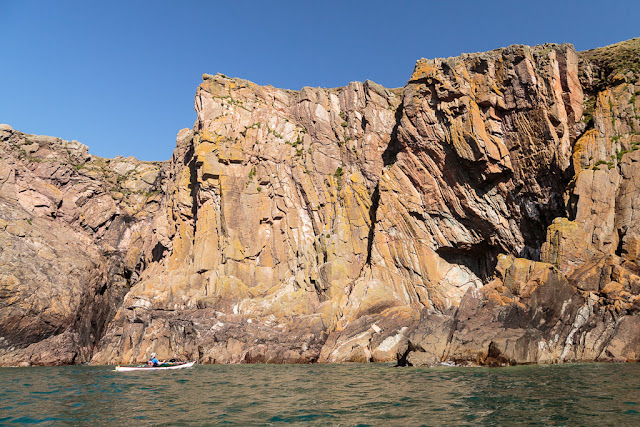 Beyond Carrick-Kee the interest continued with more cliffs... 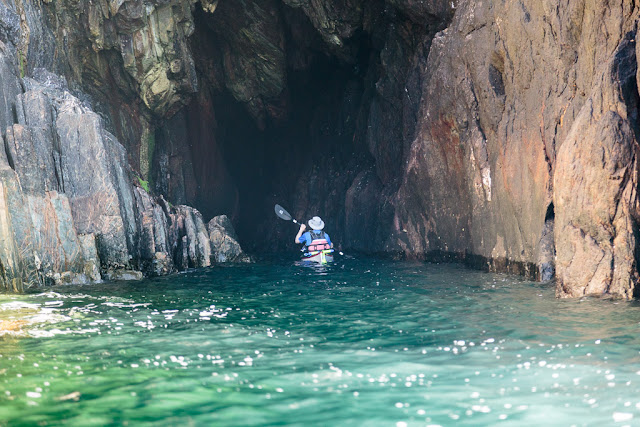 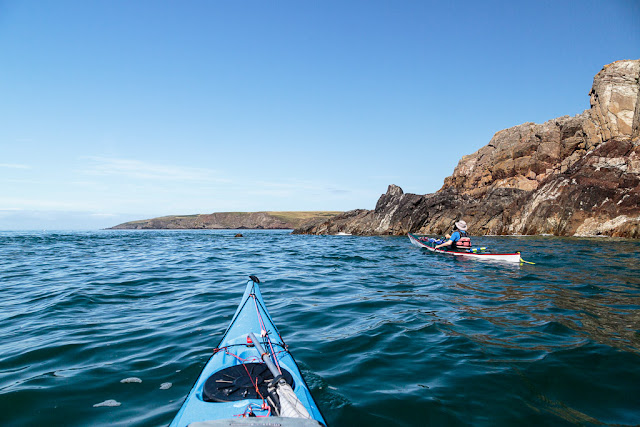 At Carrickcorrie you will turn NW and see the north shore of West Tarbet Bay. When the west going stream is running along the south coast of the Mull of Galloway you will encounter an adverse SE going eddy at this point. If it is windy from the NW it can be hard work breaking through this.
Posted by Douglas Wilcox at 2:31 pm 4 comments: