Sea kayaking the Rinns of Islay. 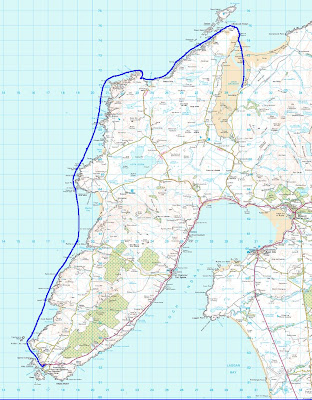 A 37km, day trip round the west and north coasts of the Rinns of Islay. Launch at Portnahaven NR167521 small shop, hotel/pub, limited car parking nearby, toilets/water at top of hill. Recover kayaks at Crois Mor NR297703 in Loch Gruinart or a few hundred metres to the NE at low tide.

Portnahaven: Constant -0110 Oban (+0550 Dover) Tidal streams off Portnahaven run at 8 knots springs. Heavy overfalls occur off Oronsay and Frenchman's Rocks. In the north going stream a counter eddy forms in Lossit Bay, which can cause confused water where it rejoins the main stream at Frenchman's Rocks. Four hours into the north going flood, we met a SW going eddy along the coast from Cape Fear to Ton Mor.

It is our experience that inshore streams round Islay turn about 45 minutes before the above published times in the pilots.

Don't be deceived by the calm of Portnahaven harbour, as you leave the harbour... ...all hell can be let loose. An unforgiving coast of cliff and surf beach stretches for an unremitting and challenging 26 km... 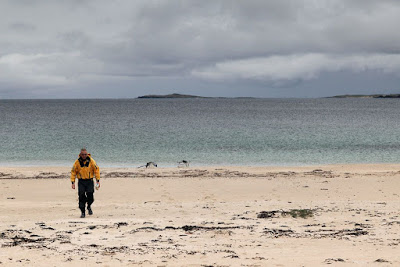 ...until you turn the corner and find a respite

Dry mouths in the deceptive calm of Portnahaven.

Flotsam, jetsam and kayaks off the Rinns of Islay.

The ground was moving and it was nothing to do with the Laphroig!

Singing seals of Loch Gruinart at the end of a long day.
Posted by Douglas Wilcox at 7:00 am 3 comments: