Between a pox and a hard place on Stac Lee. 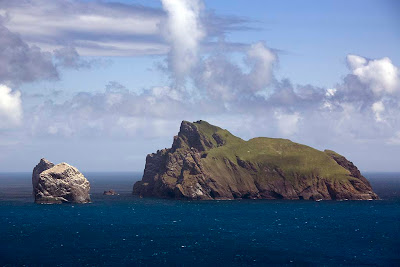 From the cliffs on the NE coast of Hirta it is less than 7km across the Atlantic to Boreray and its two satellite stacs. They are Stac Lee and Stac an Armin (in the shade behind). They are the highest stacks in the British Isles. The islanders kept sheep on Boreray and also visited these islands for the sea bird harvest in August. Amazingly there are also about 50 cleitean on Boreray and about 80 on Stac an Armin! 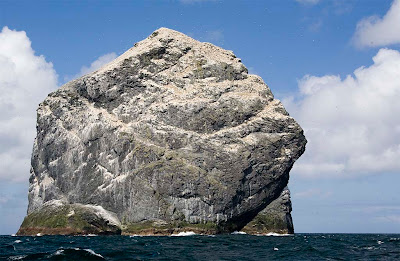 <
There were also bothies on all three. The one on Stac Lee can still be found. It is just below the dark "V" under the left of the white stained summit cap of the island. The island and stacs are too exposed to leave a boat, so work parties were dropped off by a boat from Hirta, which would return when a signal indicated the work was done.

In 1729 a smallpox epidemic was started after a St Kildan had died on Harris from smallpox the previous year. As his clothes were still good, they were brought back to St Kilda and the smallpox gripped the population. At the time, three adults and eight boys were marooned on Stac Lee because there were no surviving adults, strong enough to man the boat from Hirta, to rescue them. They remained on this windswept rock for 9 months, through the winter and into the next summer, until the factor's boat from Harris relieved them. When they returned to Hirta, they found only one adult and 18 children had survived the epidemic from the population of nearly 200.

Remarkably St Kilda was repopulated in the 1730's from Harris, Uist and Skye. Life may have been tough on St Kilda but it was even worse for many on these other islands. The incomers were taught how to climb the cliffs and harvest birds by the few survivors. By 1758 the population had risen to 88 but it would never again reach 200. The decline had started.