Look before you leap. 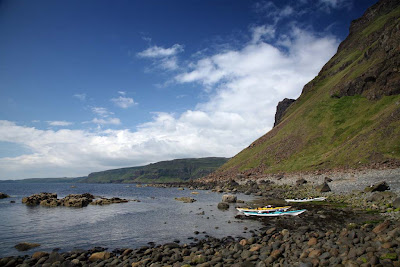 We landed on extremely slippy green boulders at the foot of Malcolm's Point. 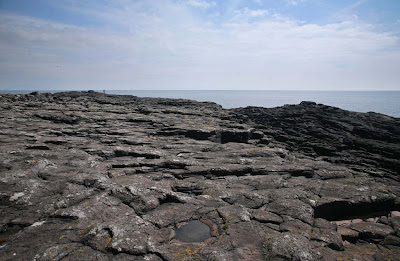 Mike is dwarfed by the scale as he casts a line from Leac nan Leum.

We were unprepared for the huge scale of Leac nan Leum, a great basalt slab, which stretched for hundreds of metres. This was testament to the violent volcanic past of the island of Mull during which, huge volumes of lava spilled down from the Ben More volcano. Even today, after some 50 million years of erosion, the lava fields are up to 1.8km thick.

Leac nam Leum is Gaelic for Slab of the Leap.... 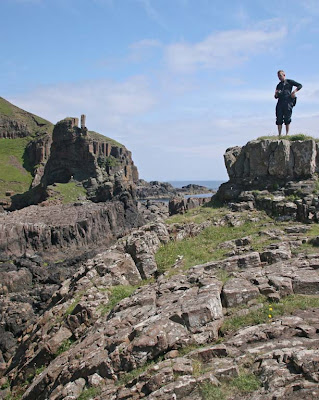 At its eastern end, the slab is riven by a great chasm over which one of our ancestors is reputed to have leapt while being pursued by an army of dreadful giants or some such terror.

Tony, who did not have the same constraints on his time, made a more measured judgement and, after a long look, decided not to leap.

Since November 30th there has been a problem with the way Blogger displays large pictures when you click on the small picture embedded in the Blog page. Blogger are aware of the issue and Blog authors can fix it by editing the html references to each picture on each page. If you have your own Blog, the explanation of how to do so is here.