The Gulf of Corryvreckan 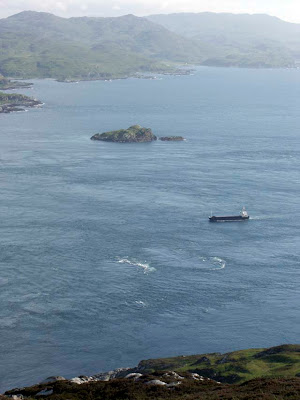 The Corryvreckan viewed from high on Scarba looking SW to Eilean Mor and Jura. The tanker gives some idea of the awesome scale of this place. 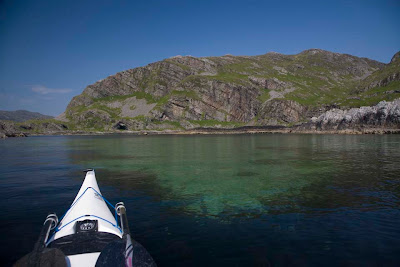 We rested here floating above a sandy bottom in a lagoon just before the Corryvreckan. We entered it through a narrow cleft in the rocks and it opened out behind. I wonder if it was "Paradise Bay" as described by Robin Lloyd-Jones on page 67 of his wonderful book Argonauts of the Western Isles. 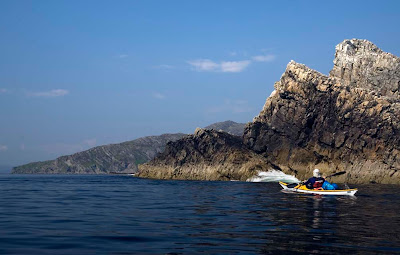 Despite the lack of wind and swell on the approach, a swell appeared at at the final headland before we entered the Corryvreckan. 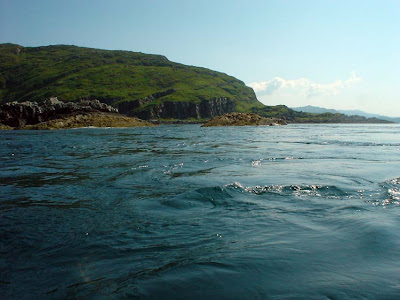 An uphill view back the way we came! The tide spun me round and we were moving at up to 18km/hr. 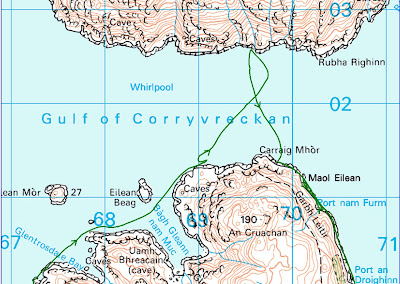 We entered the Corryvreckan at 15:30 which meant there was another 2hours and 30 minutes of ebb to go. We only did this because it was neaps and there was no wind. On the ebb, the most turbulent water is often round the islands on the south shore of the Gulf.

If you look at the left hand track where we crossed the Gulf, you will see the current slackened off towards the Scarba shore. The track then gives an impression of the ferry angle we had to use throughout the crossing. It would be very easy to be swept right out of the Gulf and miss the far shore. 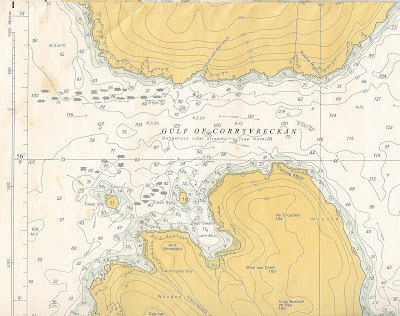 This is an extract from my old 1970's chart from my sailing days. The flood is shown with feathered arrows and the ebb with plain arrows. The brown stains are a mix of coffee and blood! 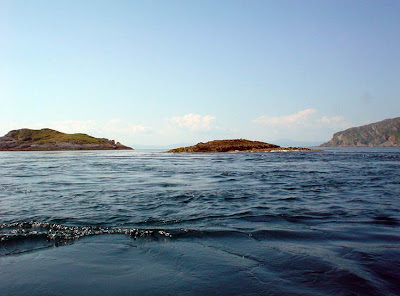 Eilean Mor and Buige rock (near the "68" on the map above) with Scarba in the distance. 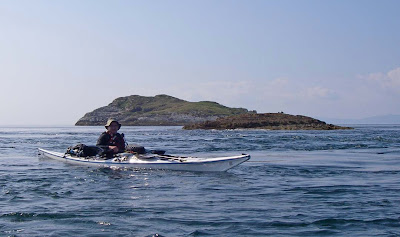 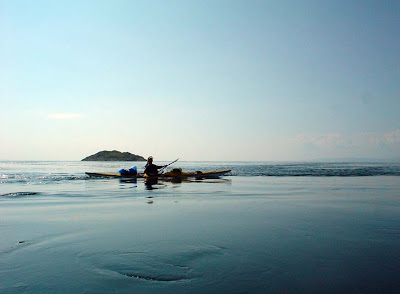 Great smooth areas would well up from the bottom then spill outwards. Fortunately there was no wind or it would have been very rough. See whirlpool-scotland for warning of a dangerous anomalous wave which can rear up without warning on the ebb in this glassy calm patch to the east of Eilean Beg. You can also order from them a hdtv DVD of video footage of the Corryvrecken in more violent mood than shown in these photos. 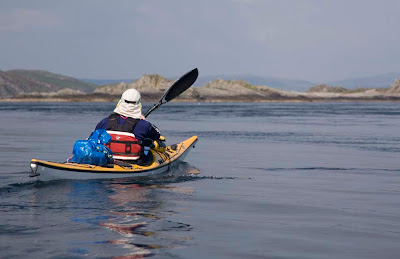 Passing the mouth of Bagh Gleann nam Muc it was all happening too quickly so we decided to savour the Corryvreckan experience and ferry over the Gulf to the Scarba shore.

Looking back to Jura from Scarba. We had worked our way up the Jura coast in the distant right of this photo. 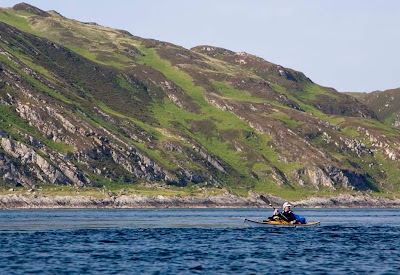 Tony crosses the final eddy line on the way back to the north shore of Jura from Scarba.

Normally if there is any wind, the Corryvreckan is a fearsome place. We felt privileged to have caught the Corryvreckan in an unexpected and unpredictably quiet mood. Consequently we were able to play in its current rather than waiting for slack water as any common sense person should.

Health warning. Scottish waters have already seen several rescues and claimed 4 sea kayakers' lives in 2007. Sadly one death was only a few miles from the Corryvreckan. We passed through the Corryvreckan in very benign conditions but do not think it is always like this. Tony and I were well equipped, experienced in interpreting weather forecasts and tidal flows, confident enough to handle rough water if the unexpected happened, sensible enough to turn back if conditions deteriorated and patient enough to have planned but waited for two years for the best conditions for this trip. Yes, on the day it was a piece of cake but make sure you are ready for the Corryvreckan or it will bite you. I know the next time I approach it, it will be with considerable trepidation and care.
Posted by Douglas Wilcox at 10:39 pm 4 comments: