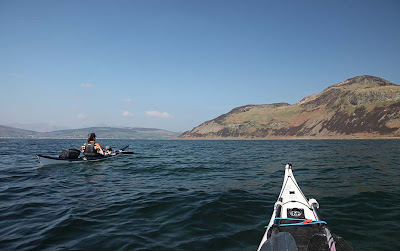 We entered the enclosure of Lamlash Bay. It was quite a contrast to the exposure of yesterday's open crossings. We were bound for Holy Island which encloses the east side of the bay. 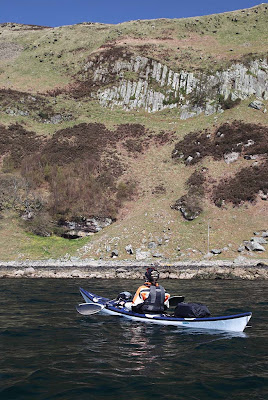 We made landfall at the cave of St Molaise. The saint was born as a prince of Ulster in 588AD but renounced his throne and chose the life of a religious hermit in this cave. After about 10 years, he travelled to Rome and trained as a priest. On his return, he made his way to the monastery of Leighlin in Ireland. He eventually became its abbot and under his leadership it grew to house over 1500 monks. 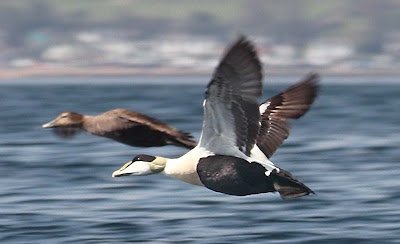 Eider ducks were courting across the bay. This drake was not letting its duck out of his sight! 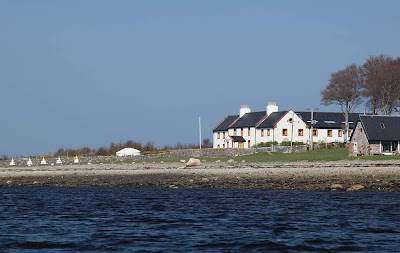 At the north end of the island, the monks of the Samye Ling Buddist monastery have extended the old farmhouse to create a visitor and study center.

There are eight white stupas on the path from the landing place to the centre (five can be seen in the photo). Stupas convey immeasurable benefits to any living thing that walks three times round one in a clockwise direction.

When we last visited in August 2007 there were "No Landing" signs round the island. I complained to the North Ayrshire Council Access Officer. She said that she had received a number of complaints and would be visiting the island to inform the monks of how they had to abide by the Land Reform Act (Scotland) just like any other landowner. I am delighted to report that the monks have now removed the signs, well done them.

However, their website still says "We strongly discourage camping anywhere on the island."
This is an unacceptable disregard of the Law of Scotland by the current owners of Holy Island.

The Land Reform (Scotland) Act 2003 and Scottish Outdoor Access Code became law on 9th February 2005. The Act establishes a statutory right to camp and the Code describes the responsibilities and best practice that should be followed when exercising a right to wild camp.

The section in the Trespass (Scotland) Act 1865, which contained an offence of camping on land without the consent of the owner or occupier, has been repealed via Schedule 2 of the Land Reform (Scotland) Act 2003. The Act confirms that camping is a lawful activity when done by a person in the exercise of the access rights created by the Land Reform Act.

The full Scottish Outdoor Access Code can be read here. 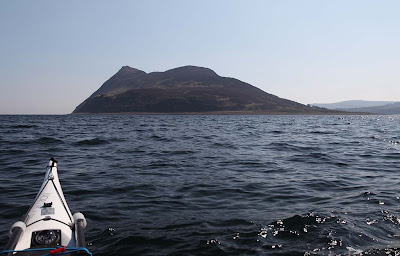 Soon we left the North entrance to Lamlash Bay, leaving the distinctive outline of Holy Island in our wakes.