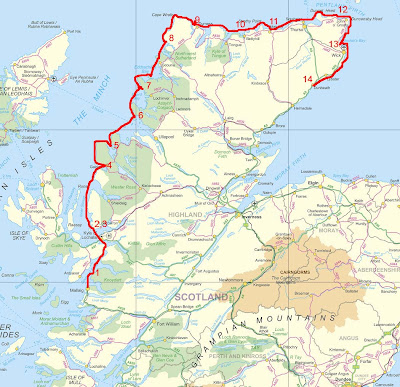 21:28 Tony:
"We are in Dunbeath. I thought the east coast would be downhill all the way but we hit some of the roughest water yet between Noss Head and Sarclet Head. The tide was against us and with the NE wind it was wind against tide all the way. Unfortunately we could not get in really close to all the caves geos and stacks. Once round Sarclet we were in the lee of the cliffs so it was a good bit easier and proved to be a most interesting stretch with great rock architecture. We climbed up the hill behind Dunbeath beach and staggered to the hotel, but it was shut. That was the low point of the trip. We walked up the A9 and fortunately found a pub.

At our last stop, yesterday evening, the pub proved to be a Grade 5 experience. It was really noisy but fell silent when we walked in and all eyes were on us. After 14 days we smell pretty bad but we sure sweetened the air in that place, it was the baddest smelling pub in all Scotland. After a while the noise started again as they all started talking about us. They spoke a different language, composed entirely of four letter, one syllable words. After a quick drink, we left the public bar to the locals and went into the lounge bar for something to eat. If anything it smelled even worse. I have no idea what it was we ate. We were glad to escape to the tents.

Given the force 7 forecast for tomorrow pm, we will get going about 5am and hopefully get down to Golspie before the wind hits us. The heavy rain will hopefully cleanse le eau de Keiss out our pores."
Posted by Douglas Wilcox at 9:31 pm No comments:

The three pillars of Knockbrex 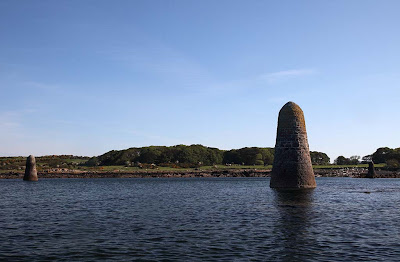 On Sunday I set off at 06:30am and paddled round the Islands of Fleet before heading towards the Carrick Coast of Galloway near Knockbrex. I came across three mysterious pillars. On further investigation I discovered they led to a hidden channel in the rocks. 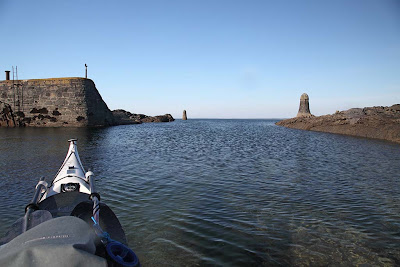 Round a bend at the head of this channel lay a secret harbour. It was probably built for a yacht owned by the residents of nearby Knockbrex house. 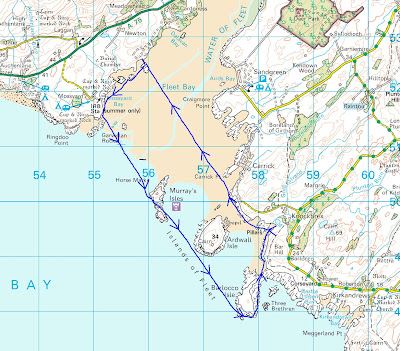 A splendid morning paddle of 12km.