"Over the sea to Skye" 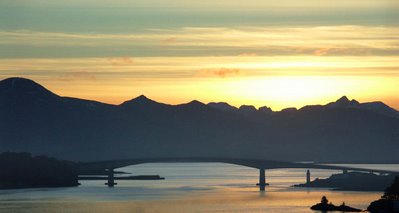 The Skye Bridge gives the words of the old song new meaning. It spans the tidal narrows of Kyle Akin and in 1995 replaced the Skye ferry that ran between Kyle of Lochalsh and Kylakin. For the next 9 years it was the most expensive toll bridge in Europe. A return trip in a car cost about £12. Then in 2004 the Scottish Executive bought the bridge from the company that built it and the bridge is now toll free.

It was through Kyle Akin that a government warship made its way to destroy Eilean Donan castle in 1719. Four and a half centuries earlier, King Hakon of Norway led his longships through the same narows before his defeat by the Scots at the Battle of Largs in 1263. The kyle (narrow straight) was named after him. 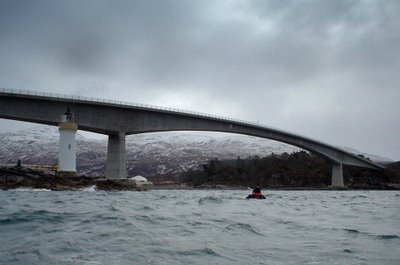 The lighthouse stands on Eilean Ban. The author Gavin Maxwell spent the last year of his life here after his house, Camusfearna, was destroyed in a fire. It was situated at nearby Sandaig. 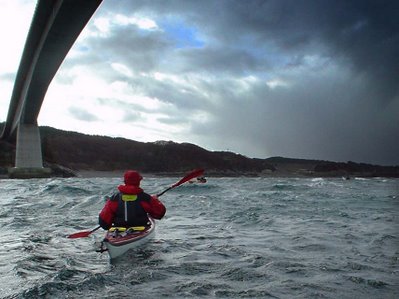 The tidal times, flow rates and even direction are very unpredictable and are affected by air pressure, rain fall and snow melt. The narrows run far faster than you can paddle and when wind is against tide can give challenging conditions.

Posted by Douglas Wilcox at 8:16 am No comments: