The Little Ross "tide race" was like a stroll in the park! 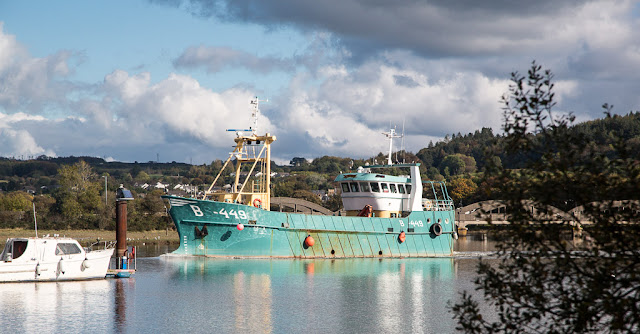 After our superb luncheon it was time to return to the bank of the Dee where the ebb tide was already running. We were not the only ones heading for the sea. B449, FV Mytilus from Belfast had already embarked from Kirkcudbright quay. 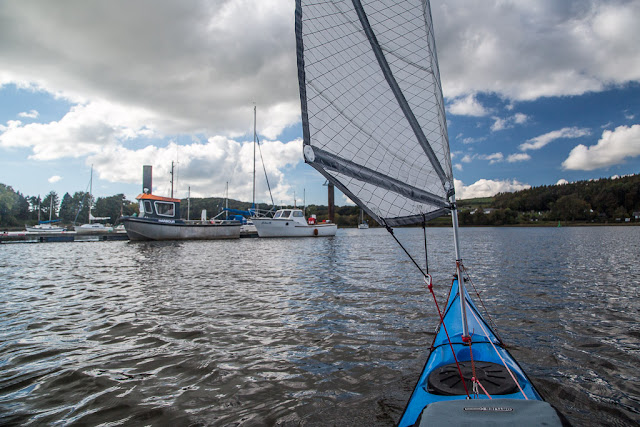 Once on the water it was apparent that the morning's wind (which we had battled against) had dropped... 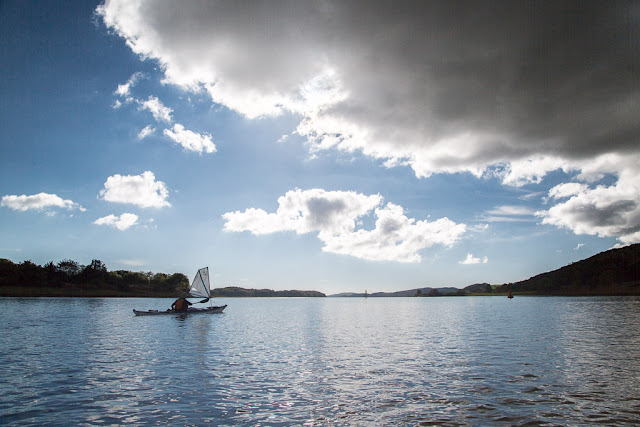 ...now we were going its way. However, we did have tidal assistance and it was not too long until we... 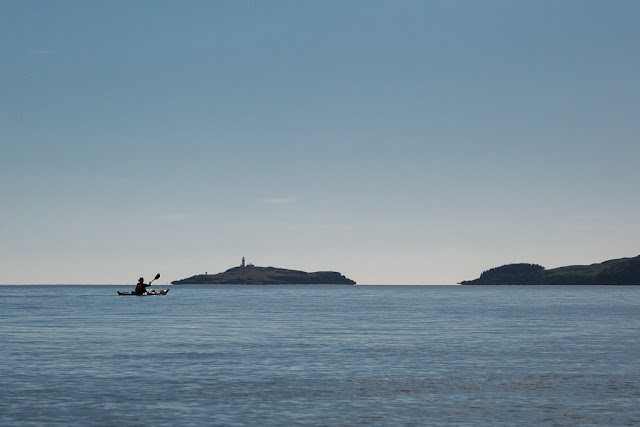 The weather was really quite exceptional for October in Scotland. 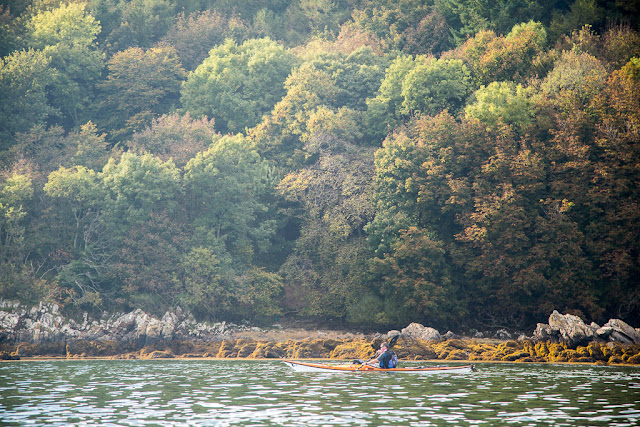 The Dundrennan Range was still firing so we kept well over to the west shore of the bay. 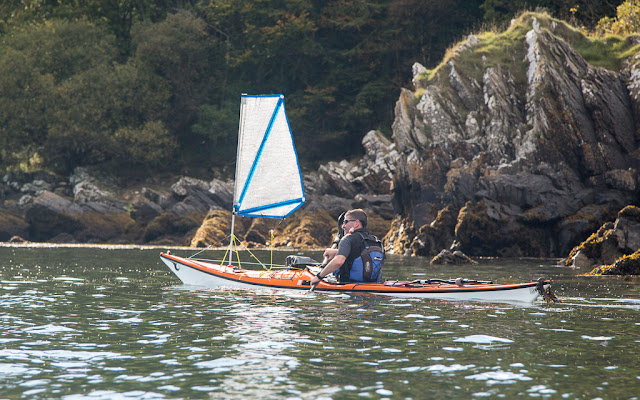 Ian called the Range boat the MV Gallovidian III on the VHF to confirm our route. 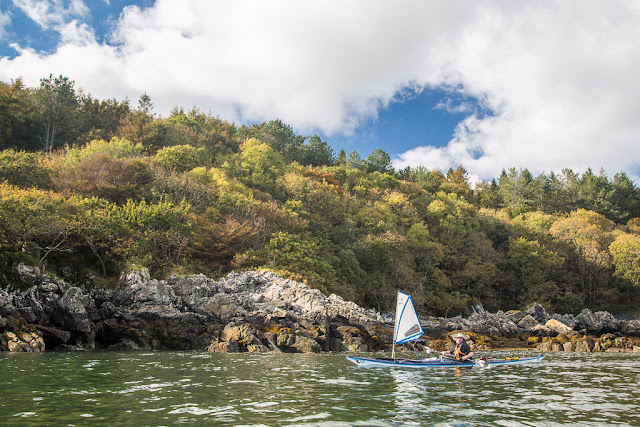 In the Solway bays trees often descend right to the shore giving the impression that you are paddling in... 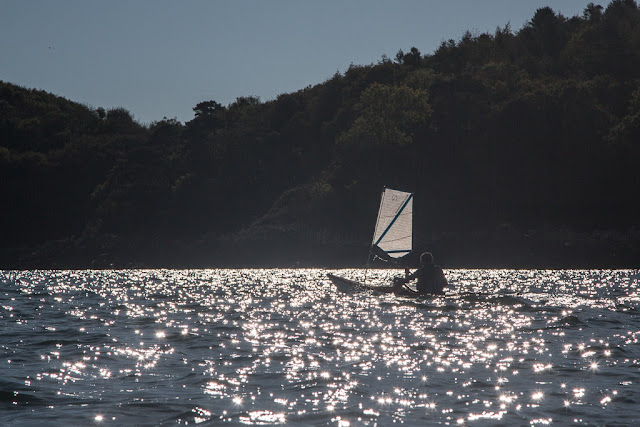 ...a pond in a park but appearances can be deceptive as the open sea and 4 knot tides...

...are just round the corner.

As we approached the mouth of Kirkcudbright Bay the wind picked up again but not one of the Robin Rigg wind turbines was turning. I wonder why...? 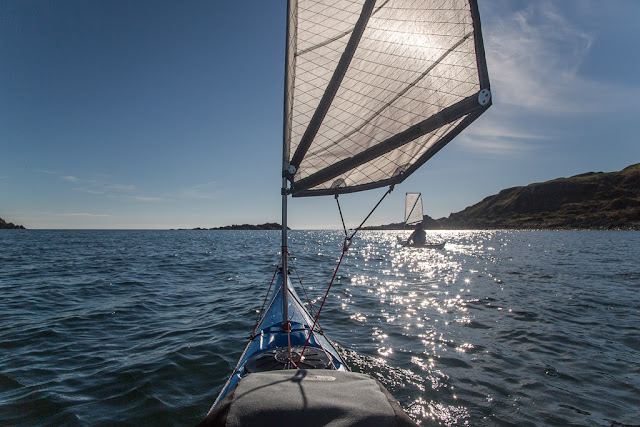 We entered The Sound at 8km/hr without paddling but there was no sign of any tidal action and so we decided to stop... 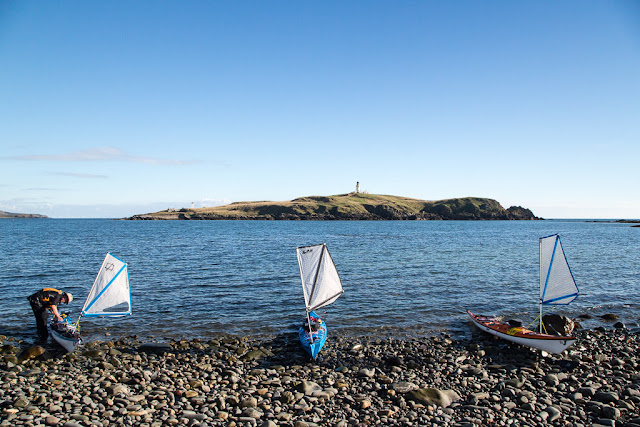 ...on a rare pebbled beach opposite Little Ross for a short break. Due to the cliffs and reefs we would not be stopping again until we reached Castle Haven Bay some 20km from Kirkcudbright. 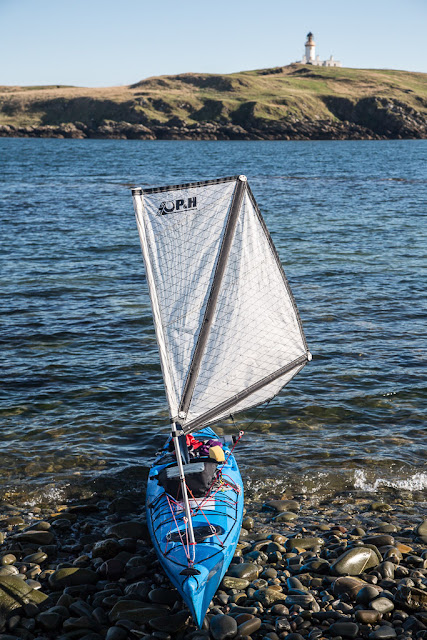 Because the north wind was with the ebb tide, the water in The Sound was flat as a pancake. This was a bit of a pity because... 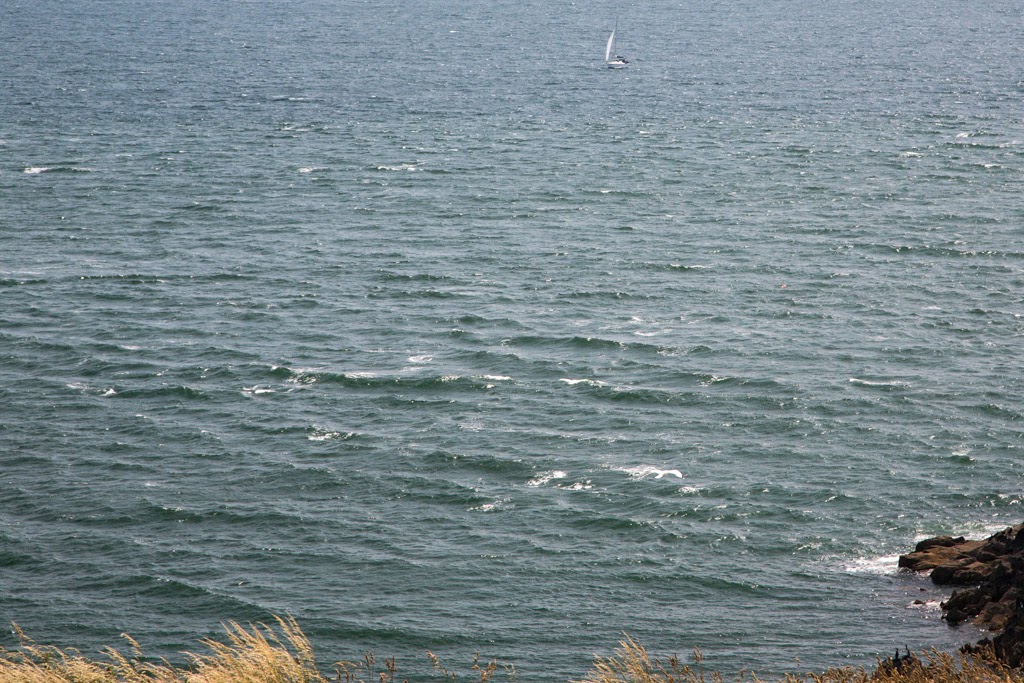 ...normally the ebb runs against the prevailing SW wind which stirs things up rather nicely like on this occasion... 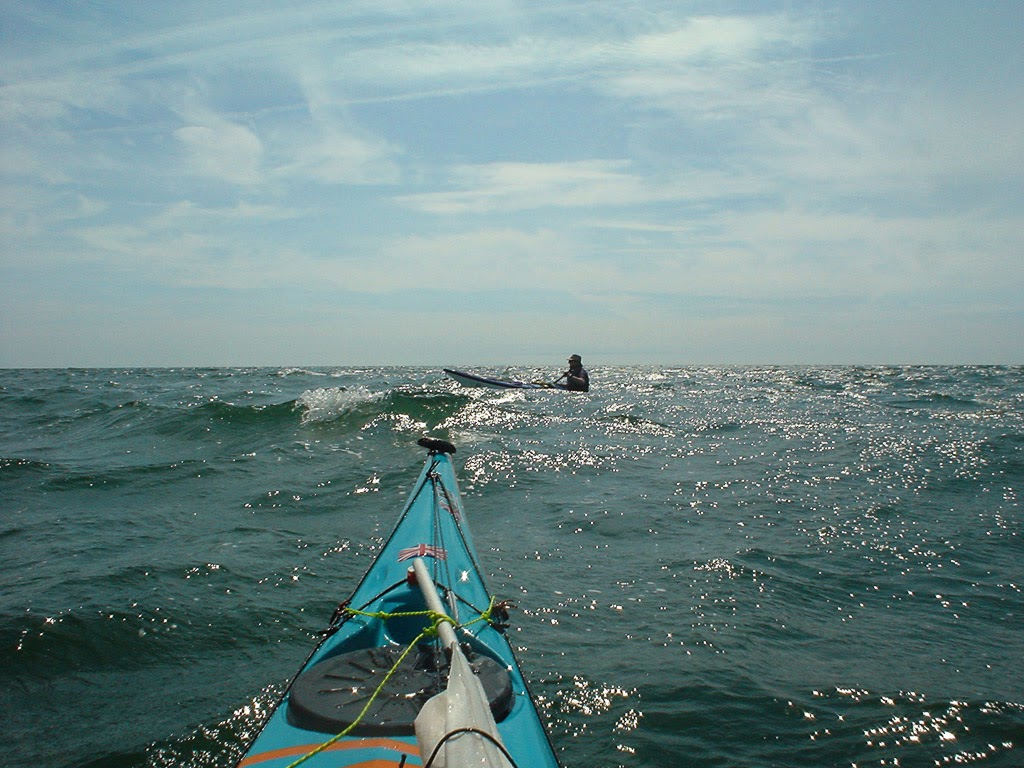 ...with Tony a couple of years before. 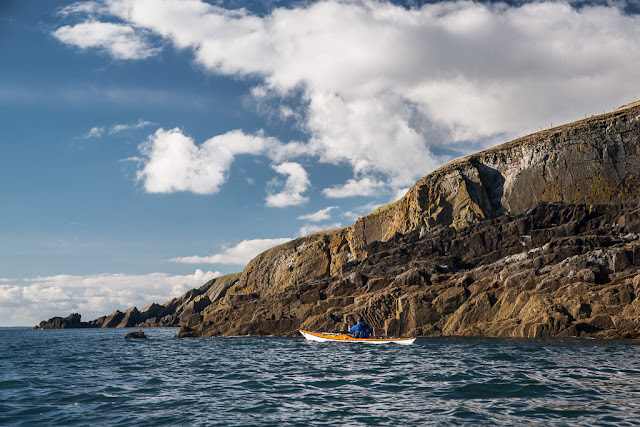 As it was, there was only the slightest riffle on the water as we cleared Fox Craig and left the sheltered waters of Kirkcudbright Bay for the open waters off the Solway coast.
Posted by Douglas Wilcox at 9:42 pm 5 comments:

A slippery approach to the graceful town of Kirkcudbright and the Selkirk Arms.

We were now well into the estuary of the River Dee and about one hour before high water. The flood tide had not only cancelled the flow of the river but reversed it. We passed this navigational can at 9km/hr upstream without paddling! 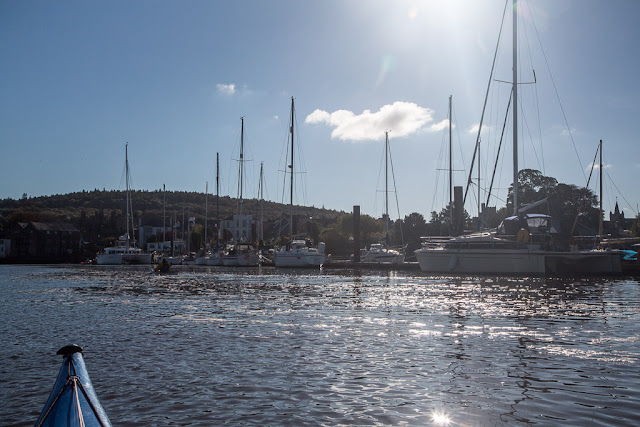 The Kirkcudbright yacht marina has some long pontoons which run parallel with the channel of the River Dee. If you want to progress upstream take the outside as the access pontoon blocks the inner passage. In case you have just joined the story in this blog, I should clarify that this is the Galloway River Dee. There are four River Dees in Britain: this one, one in Aberdeenshire, one in Cumbria and one in Wales. The Kirkcudbright Dee rises in the Galloway Hills in the catchment area of Cairsnmore of Carsphairn and Cairnsmore of Dee. There is an old Galloway saying:

We arrived at Kirkcudbright harbour to find the fishing fleet getting ready to leave at high water. The slipway can be seen just to the right of the yacht. I have... 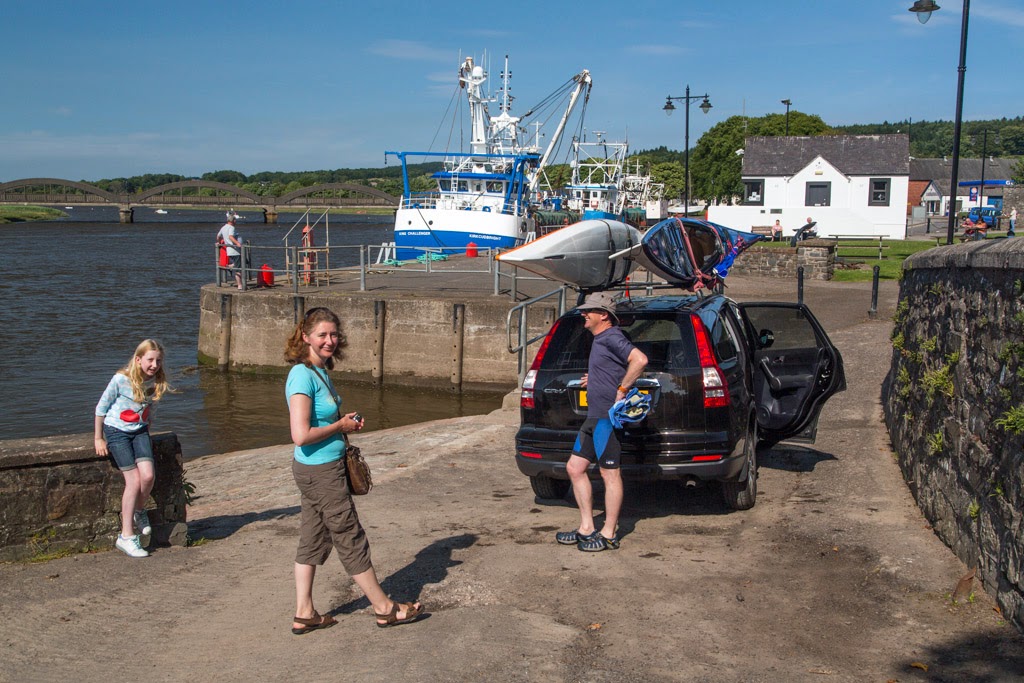 ...used it successfully on previous occasions, such as this one with Tony in July 2013. However, when Ian, Mike and I arrived, it was covered with desperately slippy mud. Ian and I both tried to climb up it but it simply was not possible as it had a coefficient of friction, which was substantially less than a well known buttered substance. 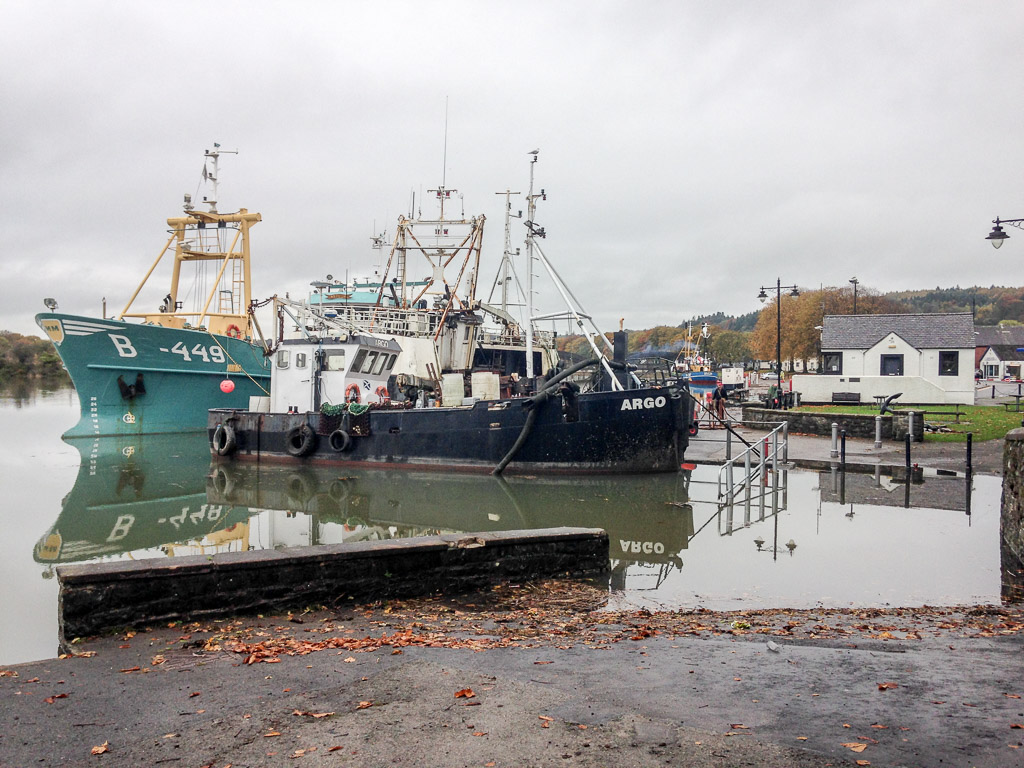 You need to be careful leaving cars and kayaks in Kirkcudbright. A big spring tide comes over the top of the quay! 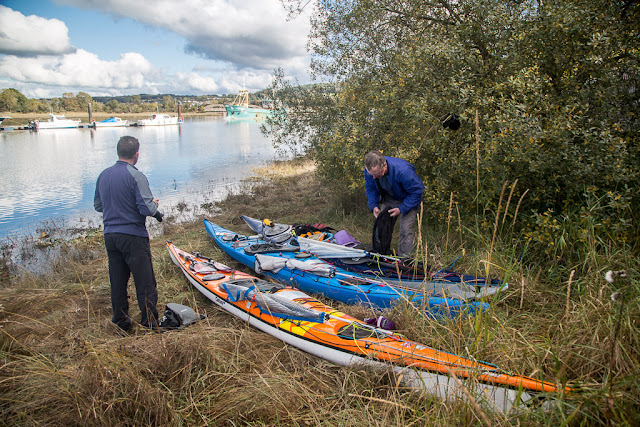 We retreated a little downstream to near the access pontoon for the marina. We changed out of our dry suits into attire suitable for dinner. Then I tied the boats to a tree with my tow line because...see above! 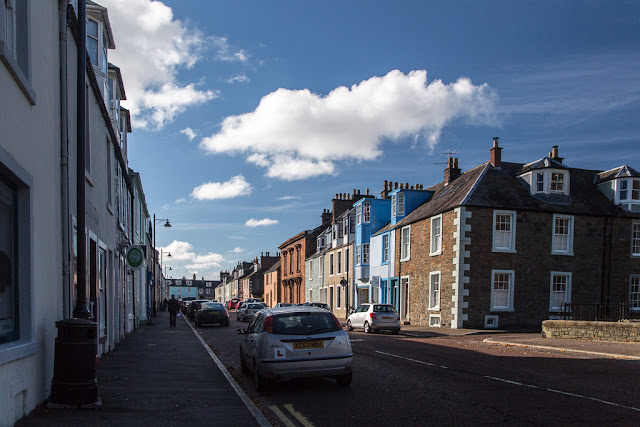 Kirkcudbright (Kir-coo-bri) is a delightful former county town with wide streets and gaily painted walls. It is named after St Cuthbert who was a seventh century monk of the Celtic church who was based in Northumberland. The town has been a Royal Burgh since 1453 and as such it became the county town for Kirkcudbrightshire one of the old Scottish counties. In 1960 its court house was the scene of the trial of the lighthouse man who murdered the keeper of Little Ross lighthouse which we had explored  that morning. 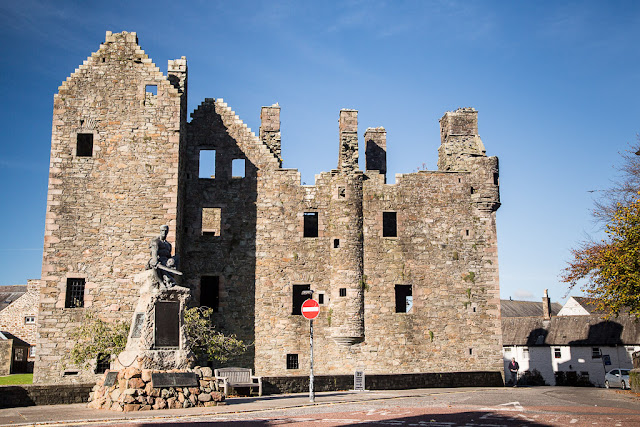 Kirkcudbright Castle occupies a central position at the corner of Castle Street and is more commonly known as Maclellan's Castle as it was built in 1582 by Sir Thomas Maclellan, the Provost of Kirkcudbright.  It was built as a fortified town house rather than as a serious castle, which could have withstood a siege. It has been a ruin since 1752. 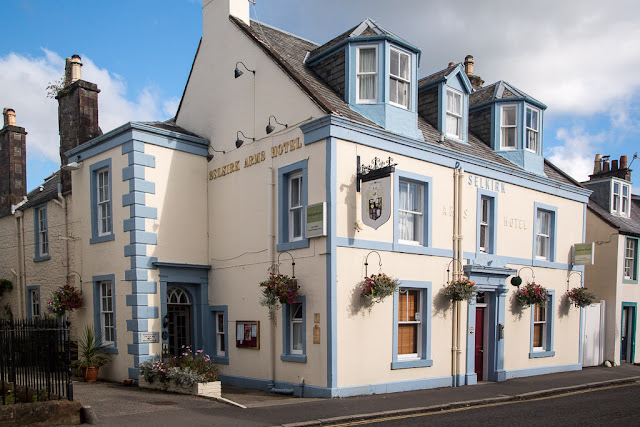 We walked through the streets until we came to some cobbles in the road outside the Selkirk Arms Hotel. These inconspicuous signs mark the site of the 15th century "Meickle Yett" which was the gate through the town's defensive wall. This was built to keep English pirates and trouble makers out of the town. As the town grew the Yett was moved in 1780 to the nearby church yard where it still stands today.

Anyway enough preamble we had come to Kirkcudbright to visit the Selkirk Arms Hotel. We were in good company, the poet Robert Burns stayed here in 1749 when he was working as a customs officer in the area. It was here (and not in the town of Selkirk) that he wrote the Selkirk Grace:


Some hae meat and canna eat,
And some wad eat that want it;
But we hae meat, and we can eat,
Sae let the Lord be thankit.

It was also known as the Galloway Grace. 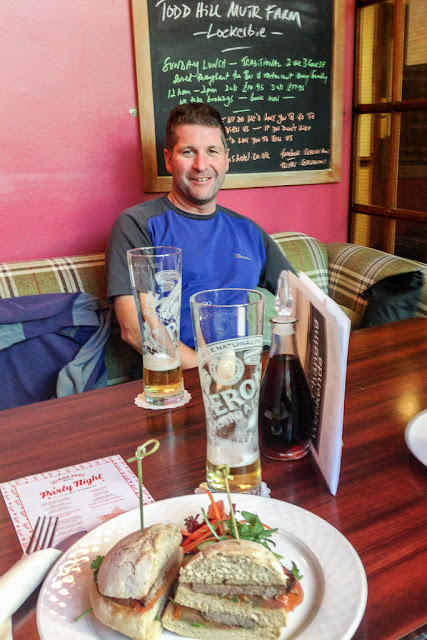 Anyway I dragged Ian and Mike inside where it was quickly apparent to them that we had entered a hostelry of some considerable worth. Although draught Guinness was available, we decided to break with tradition and enjoyed draught Peroni instead.

When it comes to food the Selkirk Arms hotel prides itself on using local producers and suppliers. Mike and I shared Alan Watson's Galloway Smokehouse board while Ian had a local goat's cheese salad. But this was just for starters we each followed up with hot Galloway beef with roasted tomato and rocket served in a sour dough roll which was simply scrumptious. Note the blackboard which gives the provenance of the steak as Todd Hill Muir farm, in nearby Lockerbie which had been butchered at Carsons in even nearer Dalbeattie. There are no Airmiles for the food served here.  If it had been in season, I would have ordered.... 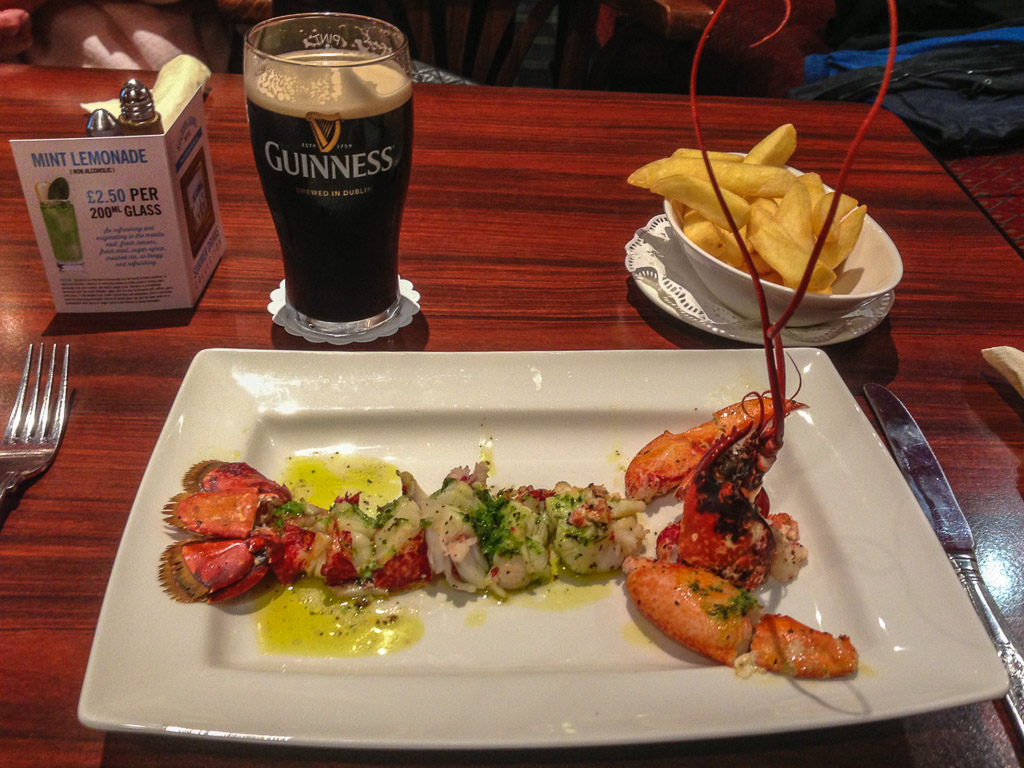 ...local lobster, which I have enjoyed here on many previous occasions.

I asked the waitress to let the chef know that three hungry sea kayakers had arrived. Within seconds, part owner, chef and fellow sea kayaker, Chris Walker, appeared in his whites for a chat for a chat. We shared tales of camping on Little Ross and of rough conditions in the Little Ross tiderace before Chris had to dash off to cook the next order. A very posh sounding lady guest could be heard asking the waitress why the chef had spoken to "them" and not to her. We had noticed she had moved from the table next to us earlier in our meal...I can't imagine why!

At 500m from the sea (at high tide) the Selkirk Arms is at the upper distance of what is normally considered as acceptable to be considered as a sea kayaking pub. However, the welcome, the exceptional food, ambience and service mean that this is this is a sea kayaking par excellence. On a score out of 10 Ian and I are unanimous in awarding it 13/10!
Posted by Douglas Wilcox at 11:36 am 2 comments: