Galloway lanes and a bridge too far. 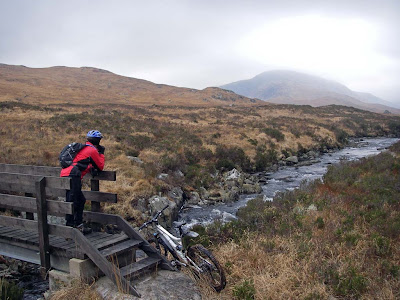 Last Sunday it was a bit windy, cold and rough for sea kayaking so Tony and continued our fitness regime by cycling along some Galloway lanes in the Galloway Hills near Loch Doon. 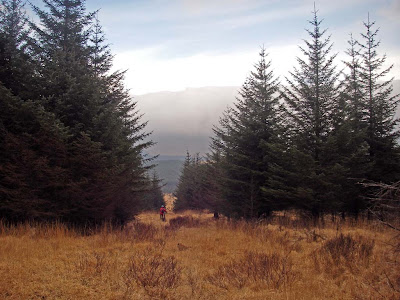 There was quite a lot of rough stuff to negotiate. We did 15km and 360m of ascent and descent and passed hills with wonderful names like Craigmawhannel and Coran of Portmark. 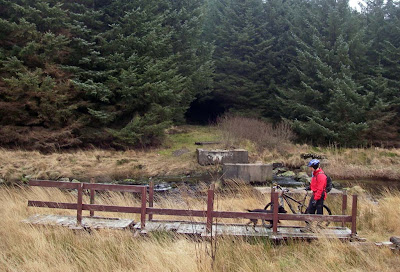 I first biked across this bridge in 1988. I told Tony it was all right then. Unfortunately it was not all right on Sunday. It had been carried away by a winter flood and its two ends were very much attached to the same piece of dry land with not a trace of even damp beneath its timbers. This was now only a bridge by name, its basic function was no more. In truth it had much in common with the Monty Python parrot.

There was another catch. In Galloway a lane is not some quiet country byway along which one can enjoy a gentle Sunday afternoon peddle. It is a deep, often slow moving, river which has cut down through the peat to the granite bed rock up to 12 feet below. We had an interesting dilemma. Should we risk falling into the icy water or turn back through miles of bog and hill? Fortunately the bridge had been built on the site of an ancient crossing and there were some slippy green stepping stones, which we gingerly balanced across. Tony's dog, Bob, was big enough to swim across...but Rory, the border terrier, was too small and so I carried him over.

Otherwise, Rory was well suited to the environment by being tough enough to keep up with us and being perfectly camouflaged. Unfortunately he saw no squirrels (grey).

Here he is near the end of the route on the shore of Loch Doon.