The State of Texa 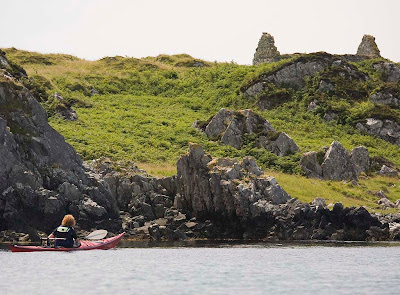 The island of Texa lies just a kilometer off the SE coast of Islay in the Inner Hebrides of Scotland. While we were cruising down Texa's west coast we spied two gable ends high on the hill above us. 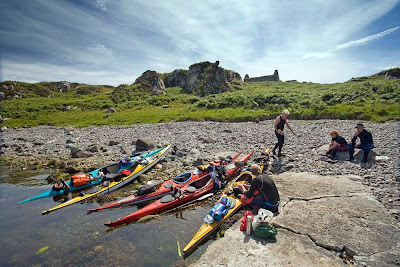 We landed at a little quay below the building. Famished and quite exhausted by our exertions since second breakfast, we decided to partake of a long and leisurely third breakfast prior to any exploration of the isle. Pushing our way through shoulder high bracken, we made our way up to the ancient lichen encrusted walls. It turned out to be a chapel which was built in the 14th century. St Kenneth(whose chapel we visited last year on lovely Inch Kenneth) was a friend of St Columba and stopped off on Texa while travelling between Iona and Ireland. It is likely that the current chapel was built on the site of an earlier chapel dating from St Kenneth's time.

Texa remained inhabited until the 19th century and its population were known as Texans. Not many people know that St Kenneth was a Texan.

Tony, David and myself decided we would try and head out west round Islay's Mull of Oa. Billy and Mair decided to explore Kilnaughton Bay and Port Ellen. Given how long we had dallied, the approaching weather front and how the tide was running, the latter option was to prove eminently more sensible.