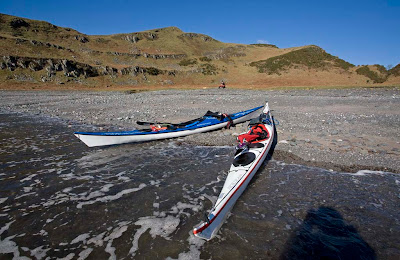 The cold sea air and early morning start had given us an appetite so we decided to make Glencallum Bay on the south end of Bute our first landfall. As the ebb had already started we had to cross the channel at a surprisingly high ferry angle. In southerly winds a surprisingly heavy race develops off nearby Garroch Head.

Until relatively recently, Glasgow’s sewage sludge boat the SS Shieldhall (or SS Gardy Loo as she was known to the hoi poloi) used to make her way here from the Shieldhall sewage works in the river Clyde. She would proceed to dump her load in the ebb tide. Glaswegians were so partial to little trips “doon the water” that it was possible to buy tickets for a sailing on the SS Gardy Loo to witness the spectacle of their fellow citizens’ keech spilling out on this beautiful sea. She was one of a succession of “Clyde Banana Boats” It has to be said a Clyde Banana was far from yellow.

Fortunately we live in slightly more enlightened times and our appetites and lunch were not spoiled by the appearance of any Clyde Bananas on this now delightful shore. 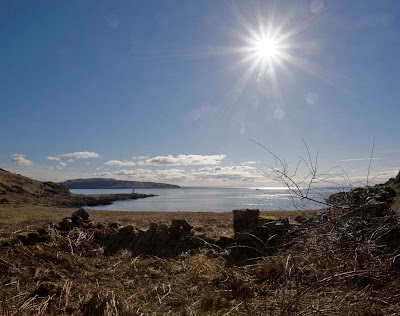 In the days of sailing ships Glencallum Bay offered shelter from northerly winds and the bay was often filled with anchored vessels waiting for better conditions. These few stones are all that remains of a popular drinking establishment which served their needs. We too enjoyed the shelter of the bay. We took in the view to the southwest over the Rubh an Eun light to the Little Cumbrae and the distant Ayrshire coast beyond but it would be much later before we could slake our thirsts.