Oiling the wheels of commerce on St Kilda. 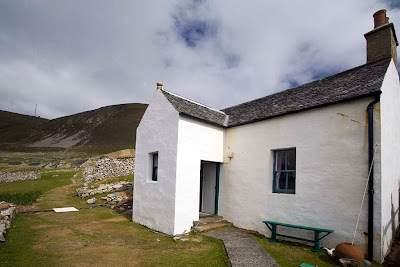 Leaving the church and the school, we made our way back up the hill to the street which connects the village with the store. Before we arrived at the cottages, we came across the factor's house. This was built in the 1860's and was the residence of the factor from the MacLeod estate on Skye. He visited the island about three times during the summer months. His job was to take payment in kind for the crofters' rent. For many years bird oil was the islander's most valuable export and the islanders had no problems paying their rent. The islanders would also barter tweed, dried fish, mutton and feathers in exchange for essentials such as meal.

In the late 19th century the discovery of paraffin on the mainland had rendered the oil extracted from birds near worthless and by 1930 the islanders had built up rent arrears of over 500 pounds. MacLeod tolerated this and evicted no one. His last factor was John Mackenzie. He was a popular figure on St Kilda as he brought stores including paraffin to the island for which no charge was made. After what was sometimes a token gathering of goods in exchange for rent he would distribute sweets and engage in long conversations with the villagers.