The stout trees and roots of Isle Macaskin. 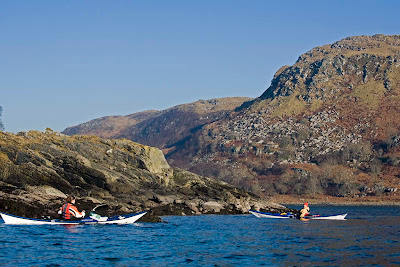 We paddled up the rugged east shore of ~Loch Craignish then crossed to Island Macaskin. 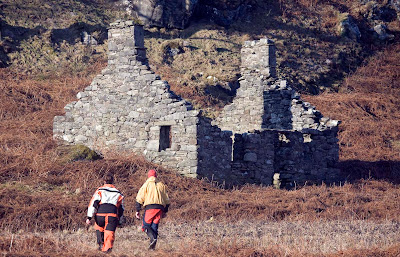 From its shore we walked over the bracken (which has covered once fertile ground) to the abandoned settlement. Inside one of the cottages, two barn owls were roosting. The settlement had 6 people living in it on the 1881 census but it was abandoned by the 1891 census. One of the last people to be born on the island was Ann Gillies in about 1860. She married Neil MacEwan and lived nearby at Kilmartin on the mainland. 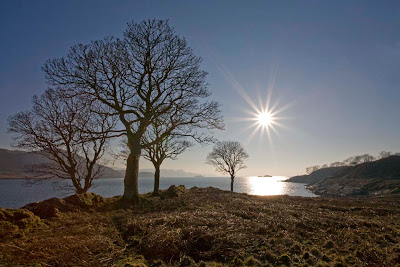 This is the view from one of the cottages. The people who lived here enjoyed this fine view and took the trouble to plant these stout trees. These islands are the roots of the Scottish nation.

From Savage Family:
Your pictures are always of very high quality, but I am particularly struck by the two today that are taken apparently into the sun, but in which detail is preserved, rather than shaded. I was wondering what sort of settings and exposures you have used to obtain such pictures? I don't mind, of course, if you prefer not to reveal your methods, but I think you have achieved good results there.

Hello Nick and Savage Family, I am glad you liked those photos, thank you!

Most cameras give a silhouette when taking into the light shots or in other high contrast photos. This is so common that it looks "normal" and high dynamic range photos such as the two you refer to look unnatural, (yet they are much more akin to what your eyes see at the time).

The web is full of how to take HDR photos, which are normally composites of several photos, taken with different exposures and blended in Photoshop. I often use that technique but it is not possible to do it easily where the light bits are so intertwined with the dark bits as in the tree shot.The tree shot was taken with a wide angle lens, 21mm, to make the sun a relatively small source of light. I used an expensive lens (Canon L series lens) to minimise flare and maximise contrast.Expensive lenses also tend to distort the horizon less when it does not run through the centre of the photo.

It is easier to reclaim detail from underexposed parts of a photo than from highlights, which once burned out are lost for ever. So in this case, I exposed for the sky rather than the foreground. The exposure was 1/800th at f20 at 400ASA .I used the camera RAW setting to save the digital photo. This results a much larger file than the usual jpeg but it stores a lot more detail, particularly in the shadow areas. On the computer, I used the Camera Raw software to open the file and used its exposure and fill light controls to bring out the shadow detail on the trees and bracken. It was pretty easy!
Posted by Douglas Wilcox at 10:35 pm 5 comments: