A Berneray bridge too far? 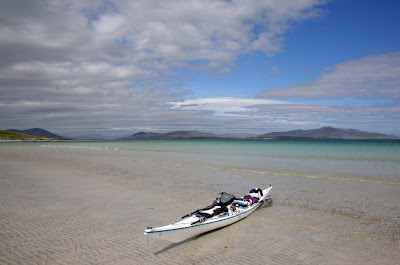 Residents of the lovely isle of Berneray are alarmed about a plan to lay a new tarmac trunk road through their island as part of a "bridge" over the Sound of Harris. In the above photo the causeway will leave Berneray at the point on the left and cross the Sound of Harris to the sand dunes visible on Killegray, just above the kayak's stern. 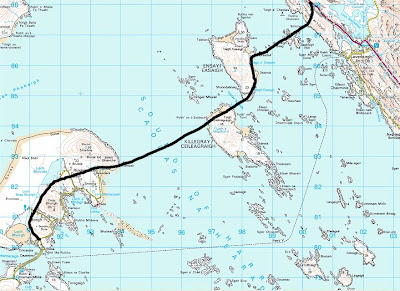 This plan will create a permanent road link from Eriskay in the south to Lewis in the north a distance of over 220 kilometers. It will lead onto a series of causeways and bridges that link Berneray to Killegray to Ensay then onto Harris. Part of its cost will be defrayed by a series of windmills and tidal generators along its length. Critics say the Sound of Harris is too shallow for efficient tidal generation and the link would restrict navigation. They also raise concern about coastline erosion and tidal surges to the north and south of the Sound. 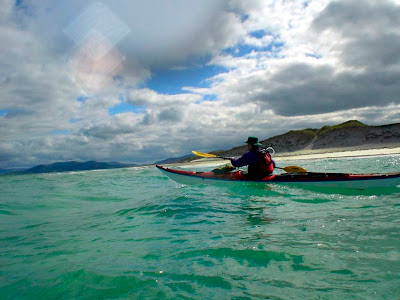 The north end of Berneray where the causeway will start. 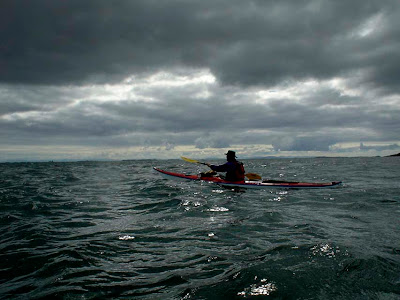 Crossing the Sound of Harris on the line of the proposed causeway. 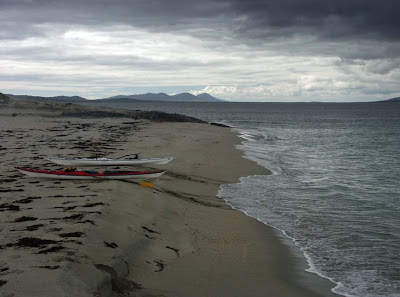 The beach on Killegray where the causeway would come ashore. 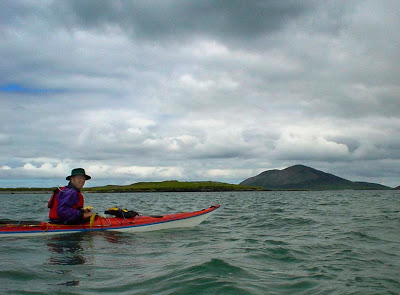 The crossing from Ensay to Harris. 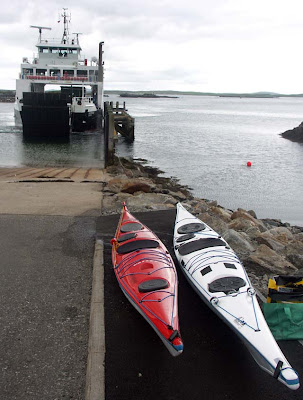 Jerry Cox, sole resident of nearby Boreray, sent me the following:

"There was a meeting at Berneray Hall on 19th December, where a council engineer and three councillors (including convenor) involved in realising this grandiose scheme received considerable abuse from the local community. Out of 19 people who attended, 18 were not happy bunnies. Traffic nuisance and marine obstruction are the main objections. Attached is a short report from Stornoway Gazette."

Local politicians faced a tough challenge at a public meeting on Berneray to placate residents convinced that their tiny island would suffer major adverse effects if a fixed link is built to connect the Uists with Harris and Lewis, having its southern base on Berneray.

During the meeting, Western Isles convener Alec Macdonald, transport chairman Donald Manford, local councillor Archie Campbell and council engineer Martin Tulloch had to assure residents repeatedly that the proposal was at an embryonic stage, with no decisions having been made, and everything up for debate.

The public meeting was called to discuss a £45,000 feasibility study report commissioned by Western Isles Council to look at the possibilities of a fixed link across the five-mile Sound of Harris from Berneray to Leverburgh, with the approximate £75 million budget off-set in the long term by revenue from renewable energy sources generated by wave, tide or wind in the sound.

The report was prepared by Jacobs Babtie of Glasgow and looked at a number of options including keeping the existing ferry service; fixed and partially fixed links with or without renewables; and a tunnel.

The last option was ruled out on grounds of cost, while the first was deemed most favourable in terms of cost. However, the report considered that the socio-economic benefits of keeping the existing ferry were low compared with what would be achieved by a fixed link.

The report concluded that within broad parameters a case could be made for building a fully-fixed link with the potential for the generation of renewable energy.

Berneray residents were vigorous in expressing their concerns over these assertions, particularly over the assumption of Berneray as the base for the link.

One resident said "This is the most crucial issue. If my life morning noon and night is having big trucks going past my window then my life's not worth living here, end of story."

It was pointed out that the road is mainly single track and in many areas would be impossible to widen without knocking down houses.

Mr Campbell emphasised that he agreed entirely that parts of Berneray could not be widened to be a double track road without knocking people's houses down, and said that would never happen.

He said: "If the project goes ahead, how the road goes when it gets on to Berneray and moves through is absolutely crucial. You couldn't possibly put the road through its current line. In my wildest dreams I couldn't imagine any elected members agreeing to demolish houses, let me reassure you."

Residents challenged council engineer Martin Tulloch on whether areas other than Berneray had been considered as the southern base for the link. He said they had but Berneray was chosen for the feasibility study as it was the shortest distance.

Mr Campbell said two further public meetings are likely to be held in Harris and North Uist before the working group considers the feedback and commissions consultants to address concerns.
Posted by Douglas Wilcox at 1:49 pm 6 comments: