At the Scottish Canoe show in Perth, I saw a very interesting kayak on the Kari-Tek stand. It was a shiny Rockpool Alaw Bach, though it lacked the glitter finish. Closer inspection showed that it was made out of a moulded material called Carbonite 2000 that is used in the aircraft industry. This is a thermoformed trilaminate of ABS plastic and acrylic. It gives a stiff, light hull with a high degree of UV, impact and abrasion resistance. It is said to be easily repairable but I do not have details. Kayaks in Carbonite 2000 are likely to be up to 20% cheaper than traditional, hand lay up, GRP composite Kayaks. Eddyline in the USA first introduced sea kayaks in this material in 1996.


The moulding machines are ultra expensive but the labour cost in producing each kayak is low. Clearly the accuracy with which the mould reproduces the original design will be paramount to the performance of these kayaks but this looks like a glimpse of the future for UK sea kayaks.


Given Mike Webb's acknowledged guru status in the World of GRP kayaks, I think it very significant that Rockpool, of all British manufacturers, was showing a kayak in Carbonite 2000. I understand that other UK manufacturers, like P&H and Valley, are also seriously considering this production method.
Posted by Douglas Wilcox at 6:19 pm 7 comments: 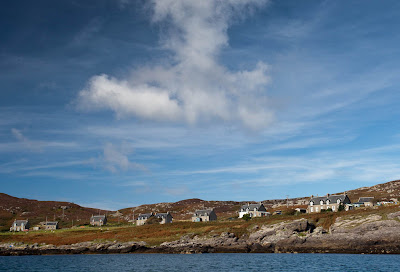 We continued SE along Colonsay's coast line after leaving the abandoned fishing village of Riasg Buidhe. We came upon the planned township of Glassard (Glas Aird) to which, the former residents of Riasg Buidhe moved. Each new croft house had its own hay meadow and the men folk were able to use bigger fishing boats which were kept in nearby Scalasaig harbour.

A recent survey showed that Colonsay had 89 houses of which, 39 were holiday homes. Some of the Glassard crofts are now holiday homes or lets and gradually the old family links to Riasg Buidhe are being lost. Hay was last cut in Glassard over 15 years ago and now the meadows, with their profusion of wild flowers, are being invaded by bracken. 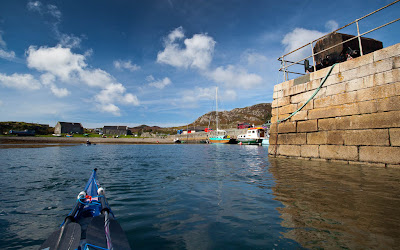 It was nearing time for second luncheon and we now approached the capital of Colonsay, Scalasaig, with some anticipation. 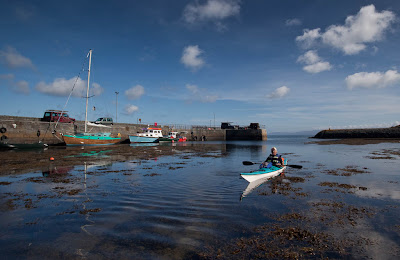 We paddled between the sheltering arms of Scalasaig's harbour and landed at a little beach at its head. The only fishing vessel currently registered with its home port as Colonsay is CN183 Sea Spray. She is a 7m wooden creel fisher built in 1960. You can just see her red hull at the back of the line of moored boats. 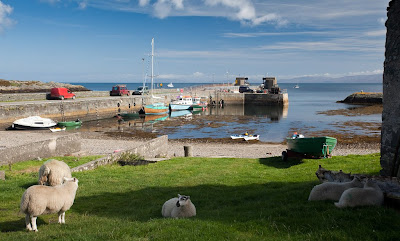 We walked up towards the main road and prepared to meet the locals. Would there be any formalities attached with our arrival? Would carnets need to be stamped?

We were met by a small welcoming committee, who were sheltering in the shade of what we presumed to be the custom house. They appeared to be taking a siesta, so we moved forward slowly to pass. Their leader cast a disdainful eye over our salt encrusted Goretex paddling gear but, without comment, slowly stood aside to let us through.

We had arrived in Scalasaig!
Posted by Douglas Wilcox at 10:35 am 5 comments: