I really rate Kokatat GORE-TEX paddling gear. The combination of suppleness, breathability and longevity is hard to beat and though the purchase price is high, the annual cost ends up costing less than cheaper products. However, latex seals need replacing throughout the garment's lifetime and leaks do appear. Unlike non GORE-TEX breathable garments, I have never known GORE-TEX garments to delaminate. This is pretty terminal if more than one or two panels need replaced as repair costs quickly escalate. Previous leaks in my GORE-TEX paddling wear have been caused by pinholes. While you don't end up with soaking wet feet, pinholes definitely lead to localised dampness.

I have been unwell for the last 5 weeks so I decided to use my off the water time constructively and send  my paddling wear to System X for some maintenance. I have a 5 pieces of Kokatat GORE-TEX wear that all needed some TLC:

I sent off a box from our local post office at 16:00 on Thursday 19/2/2015 and I received the items back at 11:00 on Wednesday 4th March I thought this was a very reasonable turn around, given the size of the job. The first thing I noticed was the very neat job of the wrist gasket replacement. The old ones had been completely removed rather than just cut off, leaving a ring of old latex stuck to the sleeve. 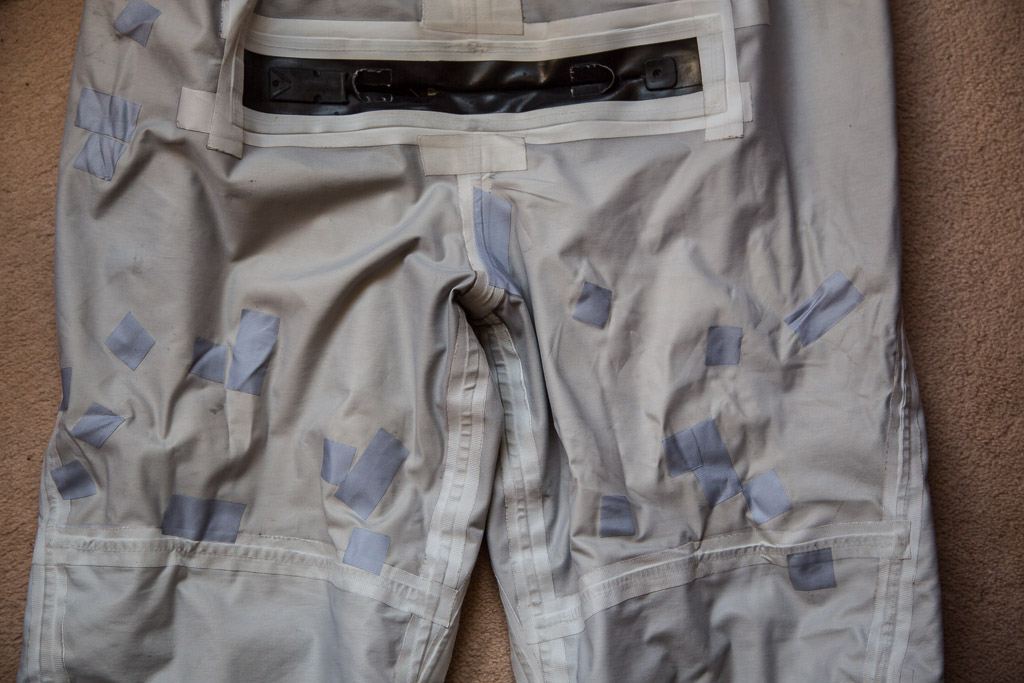 In retrospect perhaps it was unnecessary to have the 2011 two piece tested as it was apparently dry. However, given I was already sending a large box and as I was not paddling, it seemed a good idea to get everything checked!

I think it is remarkable that a 4 year old 2 piece had no leaks. I also think that it is remarkable that a 10 year old suit can be made waterproof again. Now my daughter and I can look forward to having dry feet. What does this cost? To pressure test and patch a suit with up to 100 patches costs £40, (a cag or trousers cost £20) wrist gaskets are £30 per pair and a neck gasket is £30. All a lot cheaper than buying a new suit! The only thing that System X could not do was replace the two security loops in the arm pockets of the dry suit.

Previous repairs by other companies on my Kokatat gear have used rubber patches and never been so thorough at picking all the pinholes. Neck and wrist gasket replacements have not been so neat as System X, who also removed previous rubber repair patches. This is a superb service from System X. I will certainly use them for all my future Kokatak repairs. It definitely deserves 10/10!
Posted by Douglas Wilcox at 7:57 pm No comments: