Ferry gliding in the Grey Dogs. 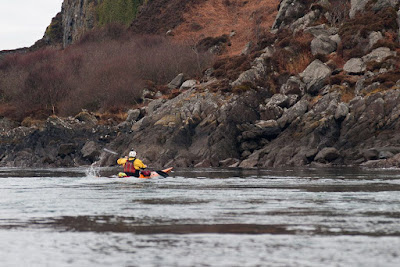 We arrived at the Grey Dogs when there was still plenty of ebb left in their bite! Here Jim is ferrying ith the current running from left to right at 7 knots. 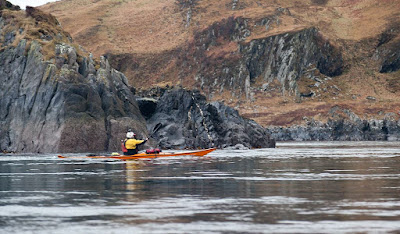 On the ebb when the tide is east going, it is usual to pass through the Dogs from west to east, through the broader south channel. But we were here to play so we spent time ferrying the north channel... 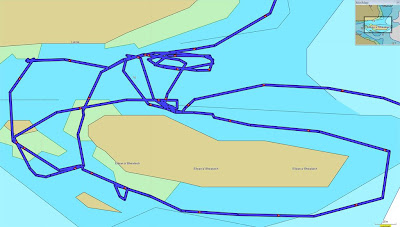 ... and round Eilean a'Bhealaich, which sits mid channel where it is isolated by the swirling tides.

Away to the south west, through the Grey Dogs, we could see Colonsay on the horizon.


I have pretty crappy paddle technical skills but there are some things in this video (taken by Jennifer) that might be helpful to paddlers progressing to more tidal paddling.

The current in the centre of the channel is flowing right to left at 7 knots and eddies either side are flowing left to right with fairly sharp eddy lines with swirly bits.

Note the acceleration out the eddy on the far side, I cross the eddy and hold a high angle (bow pointing well upstream) as the current is quite fast.

It's really too far too far away to see, but I have lifted my left, upstream edge to ferry across.  (I well remember the first time I crossed a fast river eddyline in a Pyrannha H2 kayak, without lifting an edge. I was upside down before you could say "Edge"!)

Sometimes to maintain a high angle and stop my bow being swept down stream I put a quick double stroke in on the right downstream edge.

Once I am nearly across, note the lifting of the right, "downstream edge as I cross the eddyline and meet the eddy current which is flowing "upstream"..

I have my skeg up. Of course an expert would have such perfect edge control on a ferry glide that they really would hardly have to use the paddle at all.... 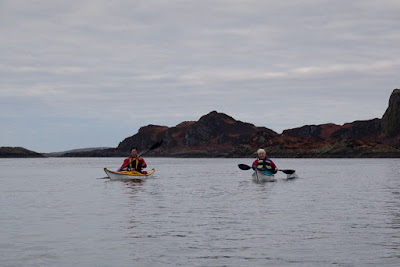 All too soon it was time to leave the Grey Dogs. You can see the two rock formations, like dogs' heads behind Phil and David, which might give the channel its name. What a fun place!
Posted by Douglas Wilcox at 7:00 am 4 comments: