An early start for the Mull of Kintyre. 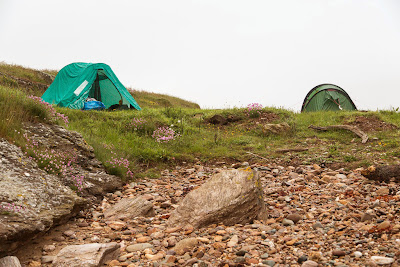 It was quite light at 04:5am when we got up on the second day of our Mull of Kintyre adventure. The reason for the early start was that the outgoing stream, close in to the Mull of Kintyre was due to start about 0630. It was neap tides and there was little wind forecast. I climbed a steep grassy and rocky bank to try and get mobile phone signal to confirm the previous day's forecast. Unfortunately I slipped on the way down and really badly sprained my right knee which had been operated on back in March 2010. The rather good news following this painful sprain was that there was not even a hint of my knee dislocating so full marks to the surgeon's skill! 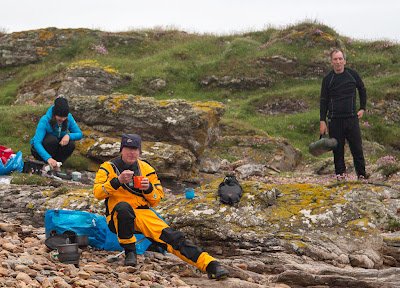 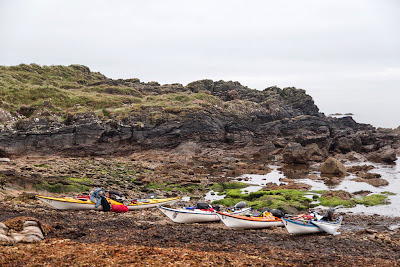 ...the kayaks. One great advantage of a camping trip on the Firth of Clyde during neap tides is that HW is in the evening and morning with low tide occurring during the night. So you do not have to carry the kayaks as far up the beach as for a spring HW which occurs in the middle of the night. 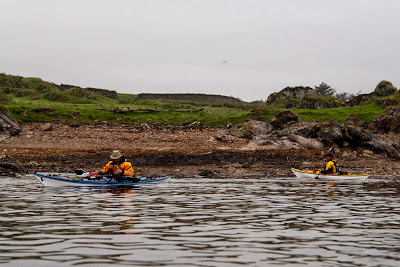 ...just in time to catch the tide, which would propel us round the Mull of Kintyre. The mist was well down and there was no sign of Ireland. Light drops of rain were falling as squadrons of early morning gannets were heading off round the Mull before us. 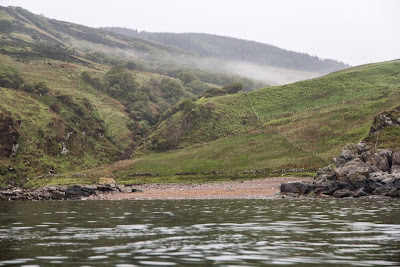 We soon passed Port Mean, which is the last landing for 23km if there is any swell. The Magicseaweed surf forecast was predicting 3 to 6 feet of surf at Machrihanish (the surf beach to the north of the Mull of Kintyre) so we were not expecting to be able to land on the only other "beach" on the Mull at Innean Glen. Effectively the Mull of Kintyre is like a 23km open crossing but the tide and the imposing scenery mean you will not experience a moment's boredom. 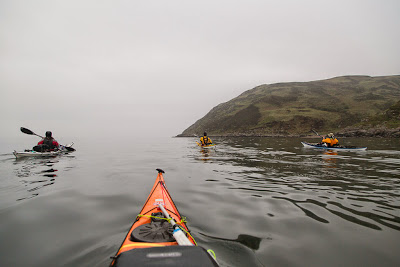 As we approached Borgadalemore Point, we were travelling at 8km/hr with hardly any paddling effort required. We were now committed to the Mull. There could be no turning back, it felt like we were paddling round the end of the world..
Posted by Douglas Wilcox at 4:38 pm No comments: