The Inner Light, Stairway to Heaven and Pie in the Sky on Holy Island.

The view north from Holy island  was stunning. In the middle distance on the left is Hamilton Isle and Clauchlands Point on Arran. Above the point in the distance is Ben Ime, The Cobbler and Ben Narnain while on the right the summit of Ben Lomond rises above the Little Cumbrae island. The summit of Ben Ime is 81km away from Holy Island but two sea lochs of the Firth of Clyde; Loch Fyne and Loch Long extend  on either side of the mountain. The Firth of Clyde is a big place and it would take a long time to explore it. 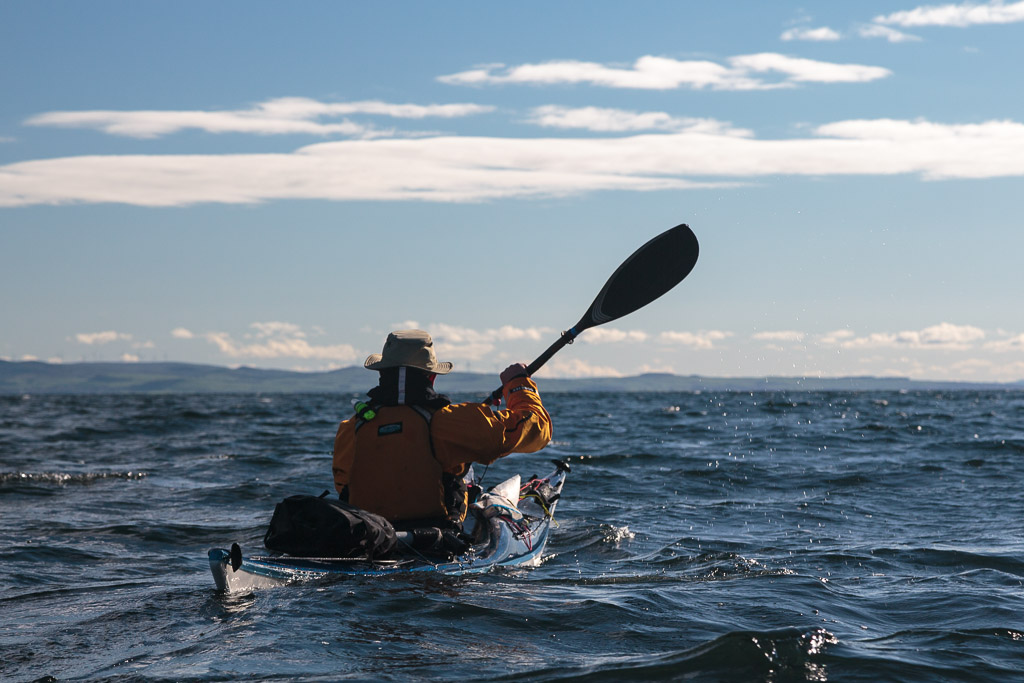 We set off down the remote east coast of Holy Island with a fair wind,... 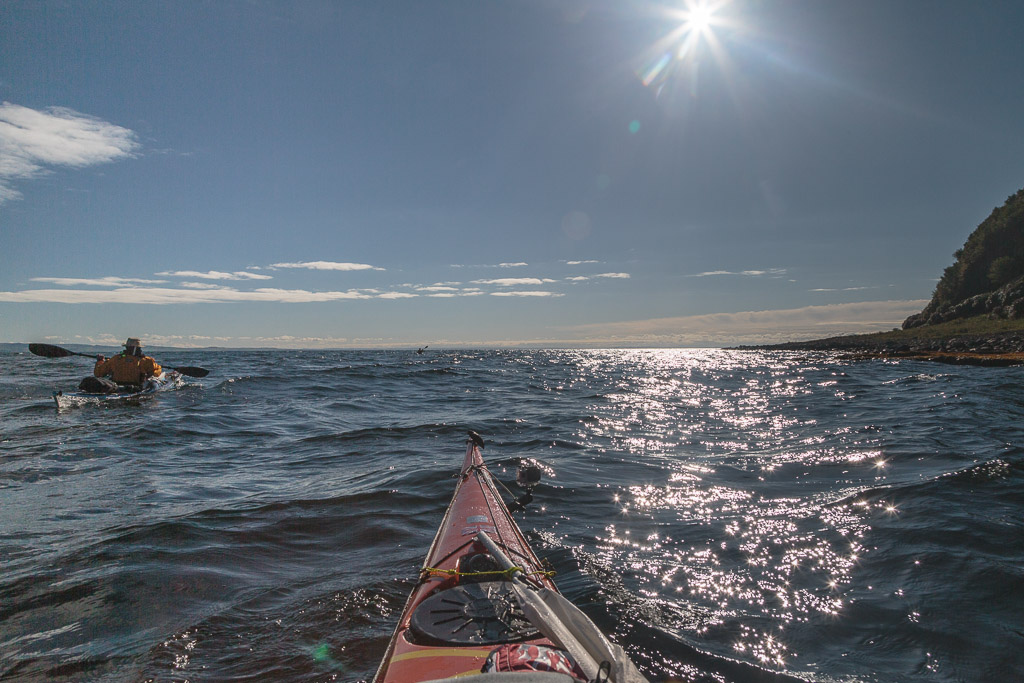 ...full sun and a sparkling sea. 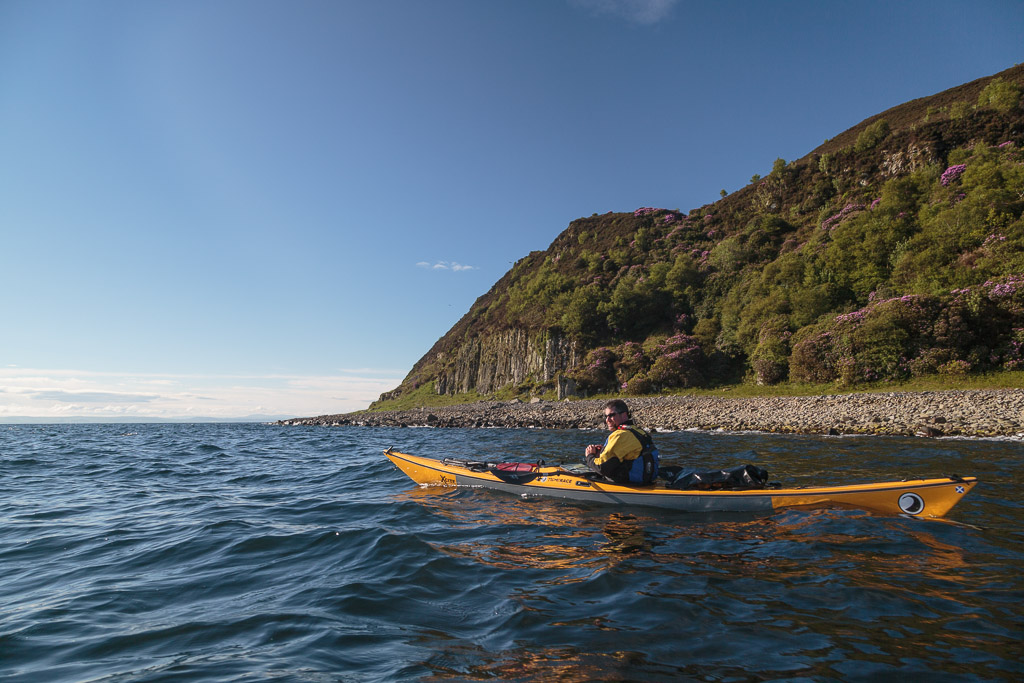 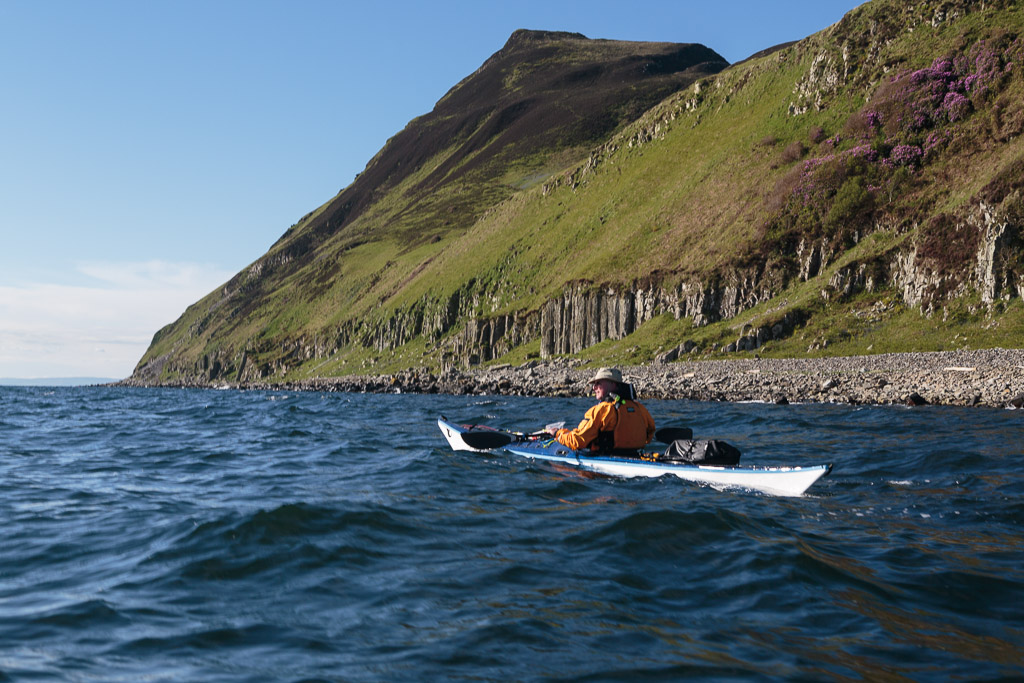 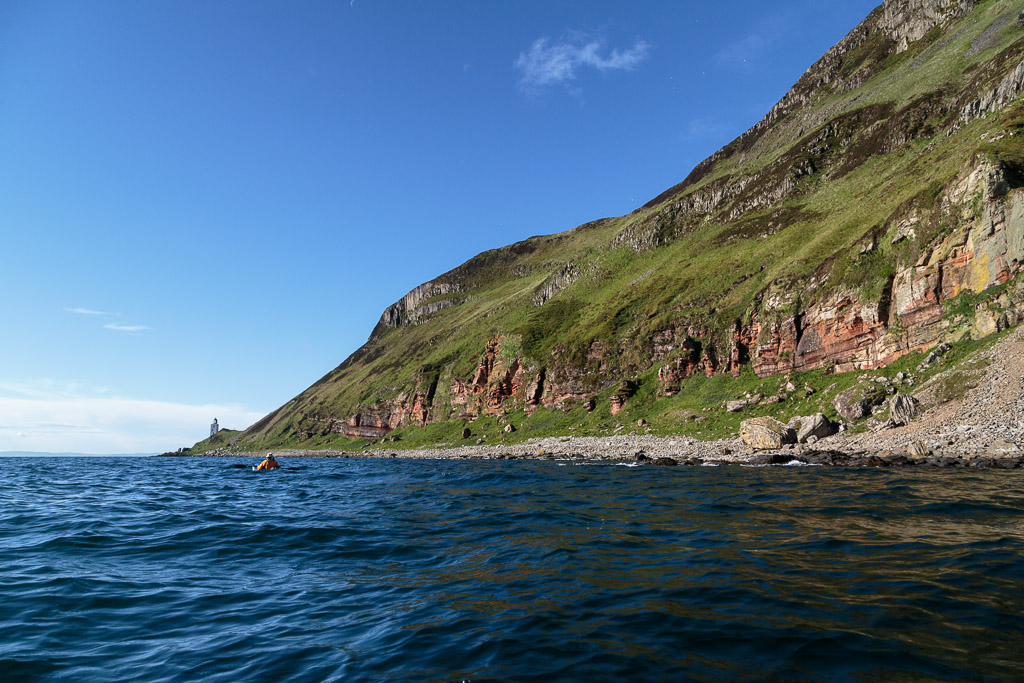 The geology here is very interesting. 250 million year old Permian red sandstone is covered with a thick sill of 55-60 million year old dolerite. The hard layer of igneous rock above protected the soft sedimentary rock below from the glaciers of the Ice Age. 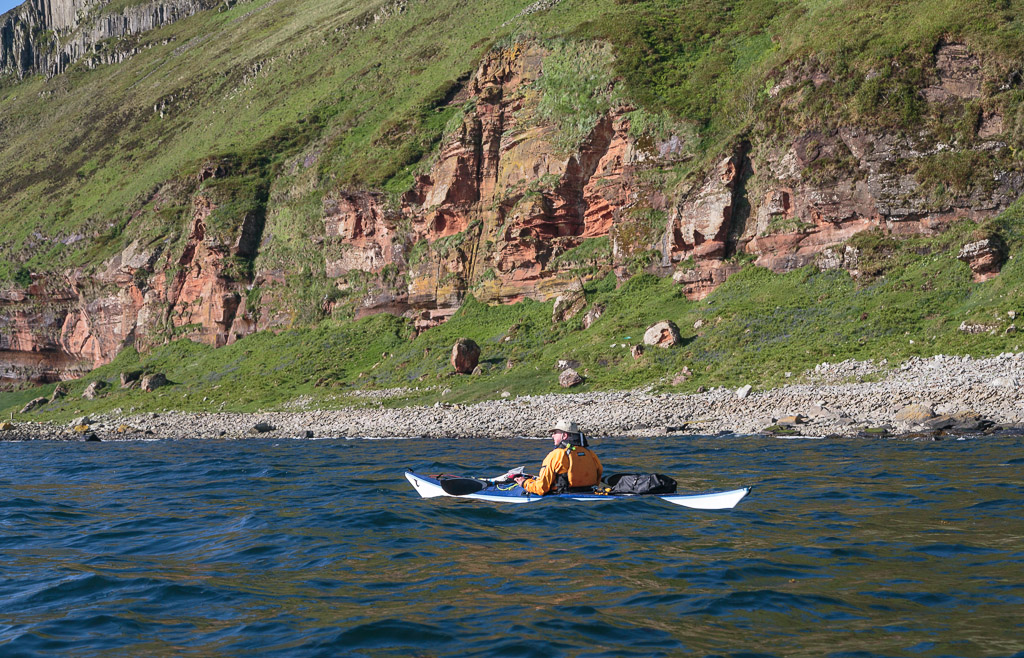 Today the red sandstone is eroding as each time we pass there seems to be fresh rock fall. This would not be the best place to camp. 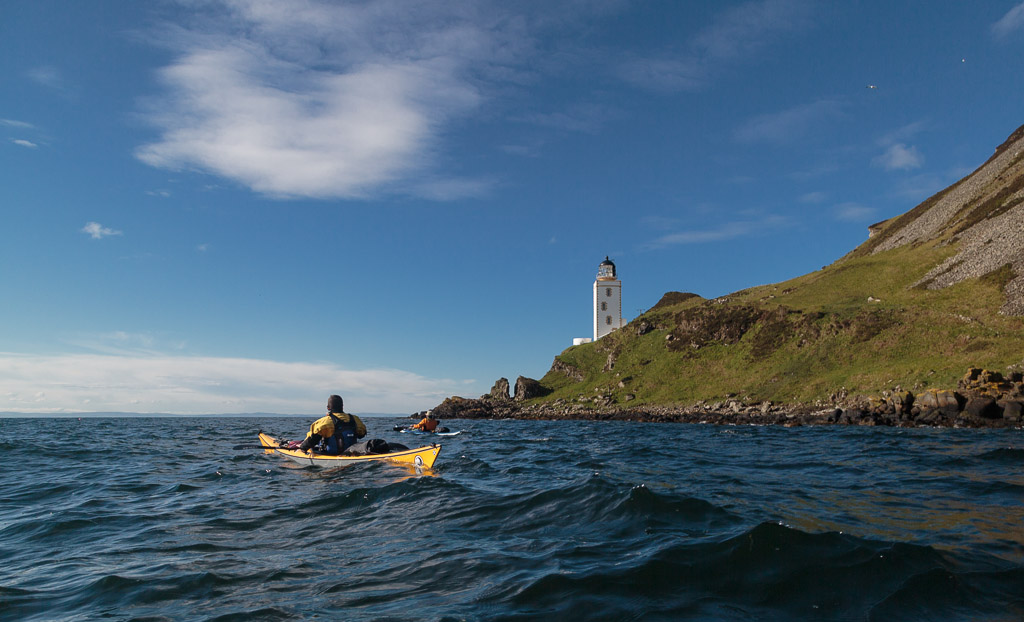 As we approached the accurately named Pillar Rock, we came to the Holy Island Outer Light. It was built in 1905 and was the first square lighthouse built by the Northern Lighthouse Board. It was automated in 1977. I flashes white every 20 seconds. 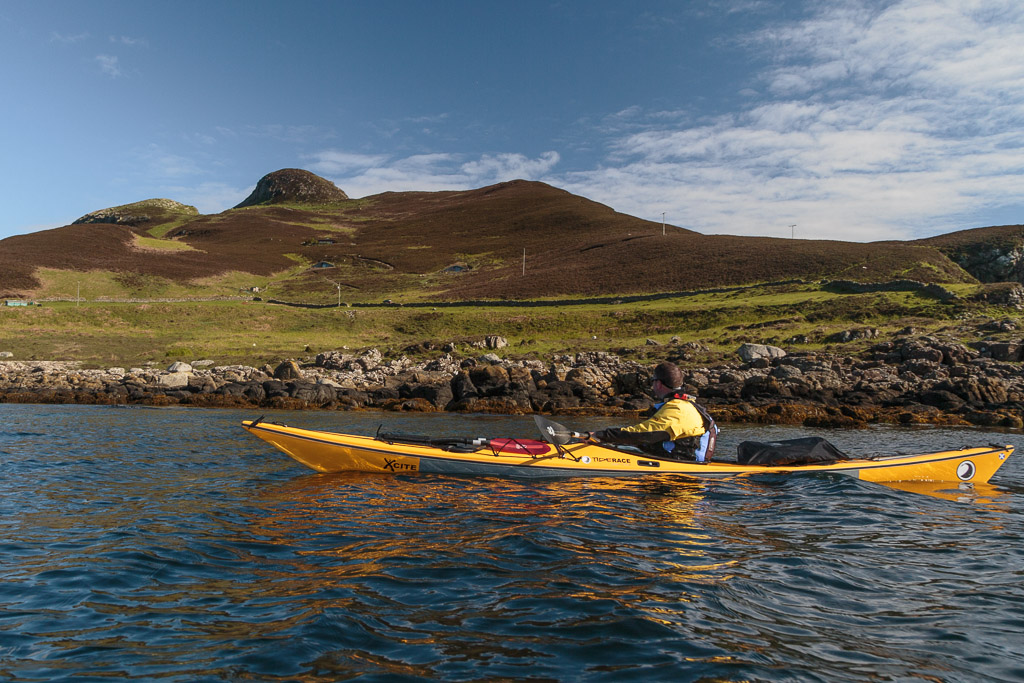 Turning the south end of Holy Island we entered the calm of lee of the island from the NE wind. 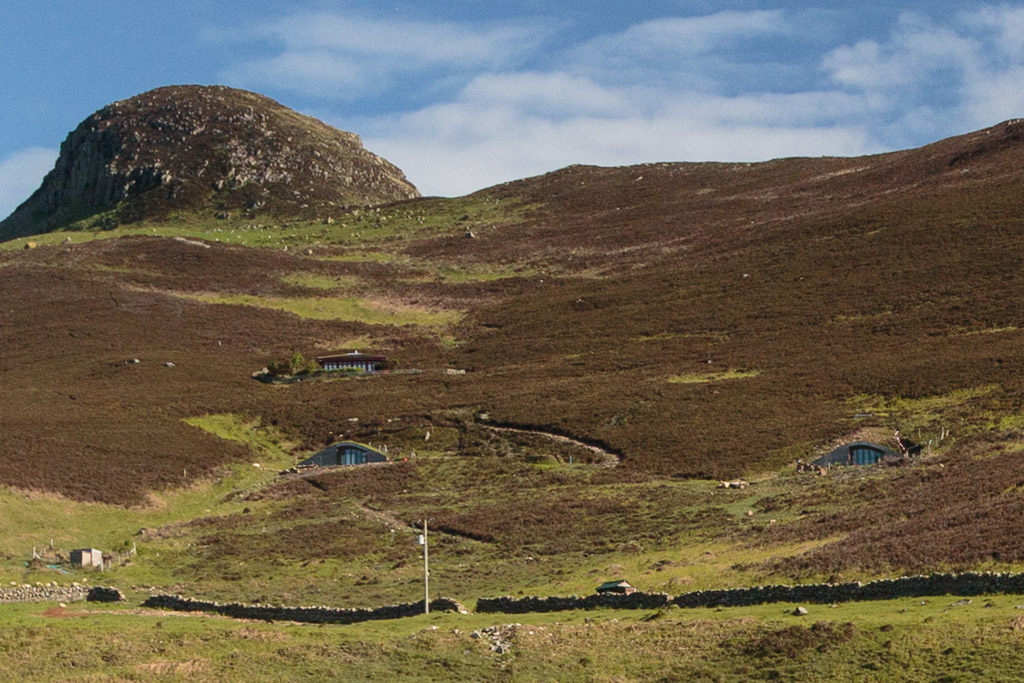 On the slopes above are built a series of retreats for the monks. They were designed by architect Andrew Wright and cots about £5 million to build in the mid 1990's. The winding path that leads to the highest retreat is truly a stairway to heaven. 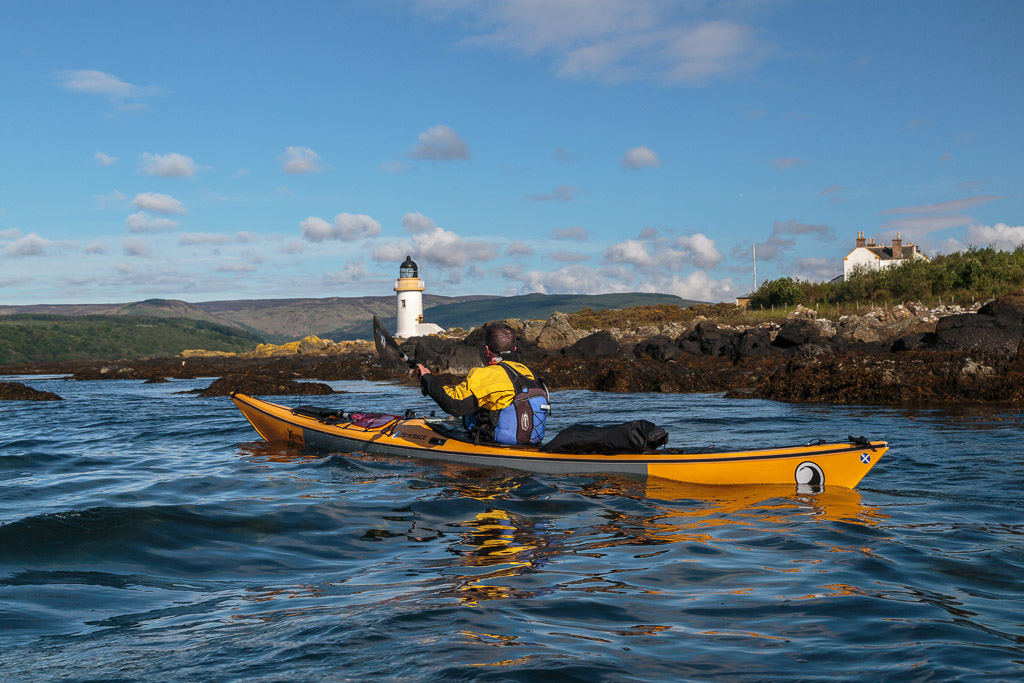 We now approached Holy Island's second lighthouse which is appropriately called the Inner Light. The last time I was on Holy Island one of the volunteers told me that some women had been meditating inside for 17 years. As regular readers of this blog will know, we like landing and exploring lighthouses but given the current residents' wish for seclusion, we were happy to leave them to their splendid isolation. 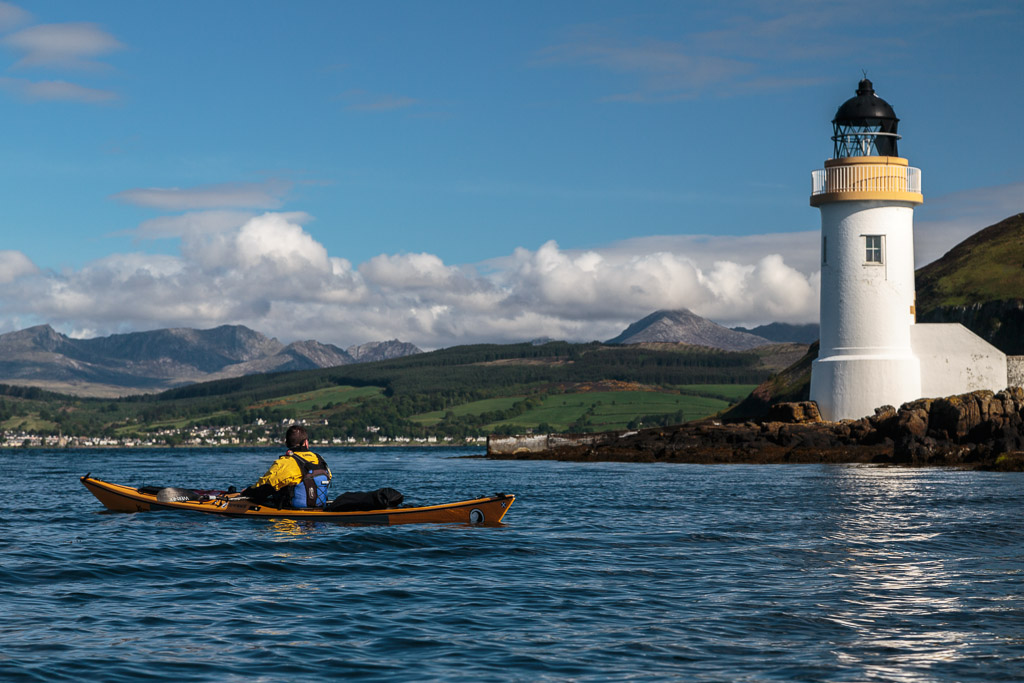 The Inner Light guards the southern entrance of the great natural harbour of Lamlash Bay. It has been used by the Vikings, the Lords of the Isles and the Royal Navy in both World Wars. The Inner Light flashes green every three seconds. It was built in 1877 by David and Thomas Stevenson and was automated in 1977. We left Holy Island and paddled across Lamlash Bay with its wonderful view of the Arran mountains to the north. 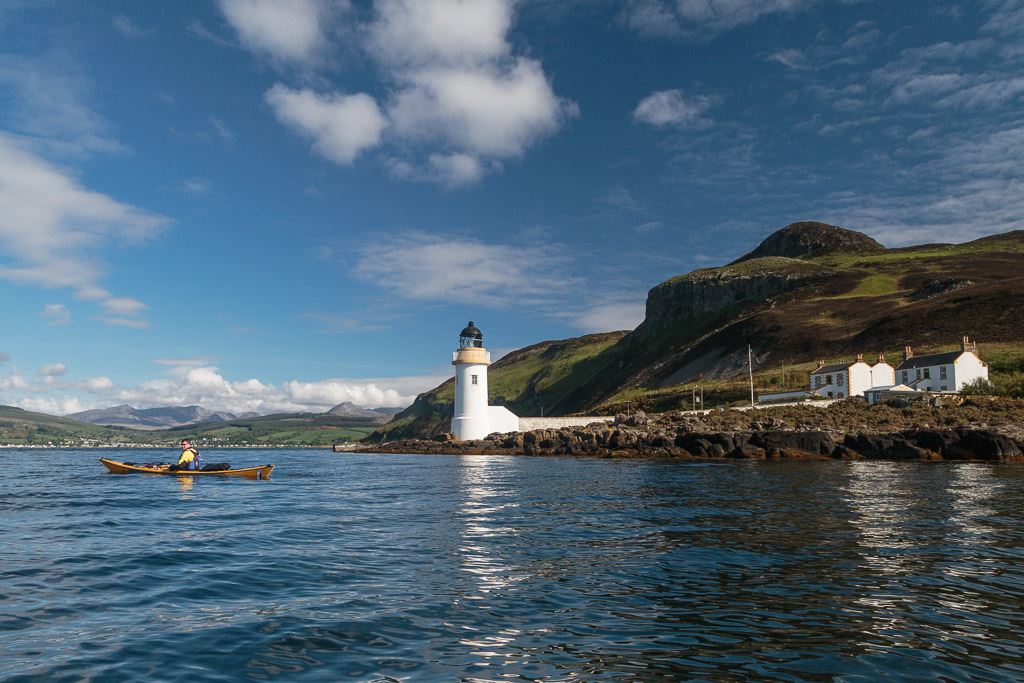 As we left the beautiful Holy Island in our wakes, I reflected on the ownership of the Scottish Islands. Recently we have visited islands owned by absentee landlords (Sanda), resident working landlords (Muck) , community buyouts (South Uist, Eigg, Gigha), government quangos (SNH) (Rum), charities (NTS) (Canna), and religious orders (Little Cumbrae, Holy Island). Perhaps surprisingly I found the island of Muck, which has a resident and working landlord, to be the happiest.

Holy Island is where a branch of my ancestors lived and worked and today it is a peaceful and environmentally sound place under the stewardship of the Tibetan monks of the Samye Ling monastery in Dumfriesshire. The regenerating natural woodland full of birdsong is a delight. However, I found it in some ways a rather sterile and unreal place. In a way it is elitist, with those in retreat being supported by the time labour and money of volunteers. It is therefore not self sustaining like the Island of Muck. Those in retreat may think they are escaping from the outside world but they are just as dependent on it as you or I. Lastly it is not a real community at all. There are no children. So despite Holy Island being the land of my ancestors, give me Muck any day. It is a living island.
Posted by Douglas Wilcox at 5:24 pm No comments: