Sea kayaking the Mull of Galloway 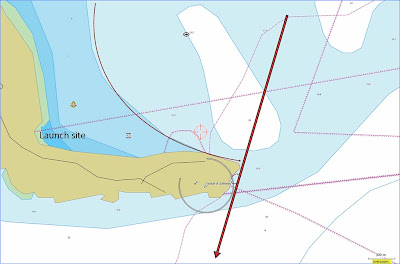 This map shows the Mull of Galloway tide race on the ebb. The race catches a number of kayakers out because the published information is not accurate, close inshore where kayakers will be. The tidal diamond on the chart is 3km SSE of the Mull and shows the west ebb flow starting at +0020 HW Dover at a spring rate of 4 knots.

The Cooper Reid book, Scottish Sea Kayaking says the WSW stream starts about 1 hour after HW Liverpool ( +0115 HW Dover). I know at least two kayakerswho have been caught out by this information. Rab says "This was certainly the biggest unplanned tide race that I had been in!" The ebb SSW flow close inshore at the Mull, where kayakers will be, starts at -0130 HW Dover, 2 hours and 30 minutes BEFORE the time in Cooper and Reid's book ( I have been in touch with both Doug Cooper and Franco of Pesda press and this will be corrected in the next edition.)

This map above shows the ebb flow. From East Tarbert an eddy carries you with increasing velocity (12 km/hr) right into the heart of the race and the junction is quite confused with random pyramids of water. There are no nice surfable standing waves here. The main race comes right into the base of the rocks, there is no inside passage. You are now travelling at 14km/hr and ideally will now want to try and break out into the flatter eddy which is just round the corner, however it will be trying to push you back into the main race and the eddy line is quite challenging. With the greatest respect to Mr Gordon Brown's recent DVD, I employed none of the graceful strokes and edging he displayed when crossing eddy lines. Basically I PLFed with a liberal application of low braces. If you break out of the race as soon as possible, you will only be in it for 150m.In the top 3 photos in my post above, David and Phil are enjoying themselves far out in the race. They didn't want to get too close to the rocks because they thought it was clapotis. They PLFed a lot more than Tony, Jim, Jennifer and myself did. In the pub afterwards David refused to take his new Palm salopettes off! 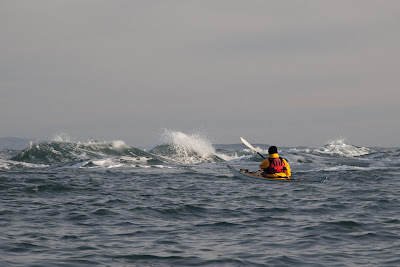 Jim is sitting in the eddy looking back at the race we just paddled through... 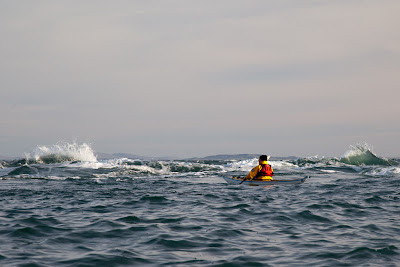 ...note the randomness of the water.

Tony attempted to paddle up the race by surfing on the waves but they were too irregular. 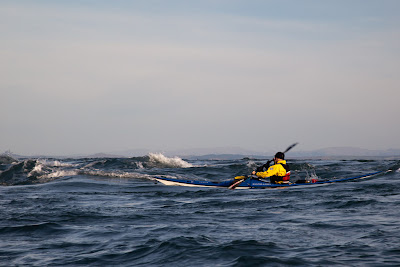 We were lucky there was just a light force 3 wind.

We have paddled the Mull of Galloway a few times recently, you have to treat it with respect. A mistake here and you will be carried far out into the North Channel. Midway between neaps and springs we found the flow to be 14km/hr which suggests a spring rate of about 19km/hr which is faster than the Corryvreckan.

We had a great time but if you are looking for a mellow trip from east to west, I suggest arriving at the Mull at -0130 Dover!
Posted by Douglas Wilcox at 10:12 pm No comments: