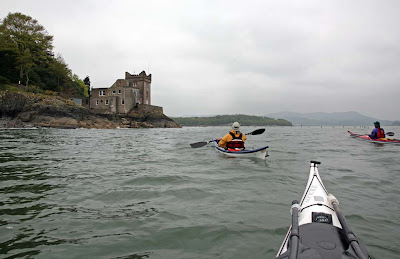 During gales, the seas off Balcary point in the Solway Firth can be violent due to the strong tides and shallow water. The shelter provided in Auchencairn Bay has been welcomed by generations of Solway seafarers. After the wildness of the cliffs, home to tens of thousands of sea birds, the Tower is the first and most prominent sign of human habitation. 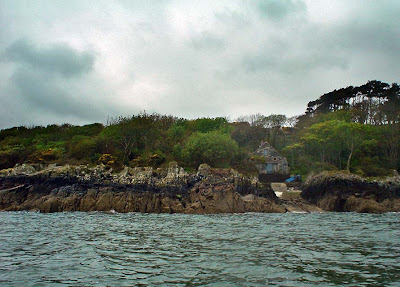 But hidden away in the trees behind a narrow break in the rocks is the Boathouse. Although now a private house it was originally a lifeboat station. In the days before the RNLI, this was where the National Life Boat the "David Hay" was stationed between 1884 and 1914. She was a 35 foot self righting and self draining rowing boat. She was usually manned by a coxswain and 12 oarsmen. Eight rowed at a time while 4 rested. After she was replaced in 1914 the station remained open until 1928 when a motorised lifeboat was stationed at Kirkcudbright and the station finally closed.

The courageous crew of the NLB David Hay.

The David Hay's most notable action took place between the evening of Friday 16th November and the afternoon of Sunday 18th November 1888. A transcript of a contemporary newspaper report is condensed below.

Friday afternoon
A telegraph alarm was received from Kirkbean from where a large ship was spotted flying distress signals out in the middle of the Firth. A gale had been blowing for 24 hours.

Friday evening.
The David Hay was finally launched after nightfall after the tide came in to the slipway. She was manned by Captain Black and 11 men. She left the shelter of Balcary Point in clear moonlight and almost immediately she was nearly engulfed by steep breaking seas in the shallow water. During the night they rowed out into the middle of the Solway towards where the ship had been seen.

Friday 10:00pm
They found the 240 ton Glendalough with her rudder smashed and her sails in tatters. There were 5 men aboard and during the night Captain Black made several attempts to come alongside and get them off. Each time the waves threatened to smash the David Hay into the Glendalough.

Friday midnight
The David Hay stood off until dawn.

Saturday dawn.
In the daylight Captain Black made a further two unsuccessful attempts to come alongside. The gale was not abating and, as the tide was now coming back into the upper Solway ports, Captain Black decided to race downwind to Carsethorn and use the telegraph to summon a steam paddle tug from the docks at Silloth on the English side of the Solway. The crew of the David Hay rested for a few hours.

Saturday afternoon.
The steam tug reached the Glendalough but in huge seas was unable to get a line aboard. The captain decided to steam to Carsethorn and tow the lifeboat out to the Glendalough.

Saturday night.
The tug with the lifeboat in tow finally arrived back at the Glendalough. The tug to windward gave some protection to the David Hay and finally the lifeboat got a line aboard the Glendalogh.

Saturday midnight.
The steam tug with the Glendalough in tow headed back to Silloth. Captain Black and his men started the long row back upwind to the shelter of Balcary. The gale continued throughout the night and in the darkness she was twice rolled onto her beam ends.

Sunday morning.
The men stood by their oars and battled their way over countless Solway rollers until the dawn and long into the day.

Sunday afternoon.
The David Hay finally limped back the shelter of Balcarry. A huge crowd had gathered to recover the lifeboat and carry the exhausted volunteers to the Commercial Inn in Auchencairn.

What a heroic story. What seamanship. What bravery. What service to one's fellow man.
Posted by Douglas Wilcox at 10:03 pm 5 comments: