First luncheon and a first paddle in the Cetus MV. 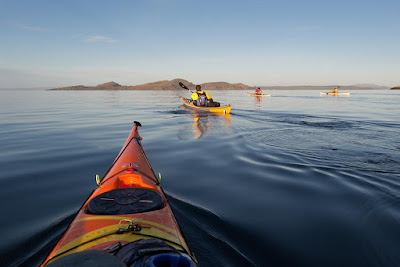 From Little Cumbrae we set off across a glassy sea towards Bute. Our destination, Port Leithne is just below the second dip on the horizon (from the left). 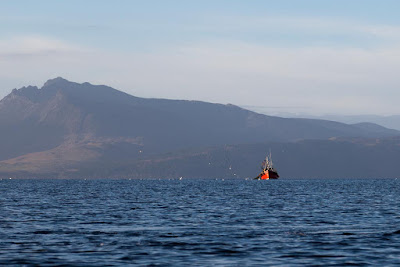 We were crossing one of the main shipping channels on the west of Scotland; the Firth of Clyde Channel. Fortunately this fishing boat was the only other vessel and it was just motoring in circles with its nets out. On other occasions we have met very different vessels such as this one exactly four years ago. Amazingly, the first time we crossed wakes with Ian was also 4 years ago in this channel. At the time he was not in his kayak but on the bridge of this ship. 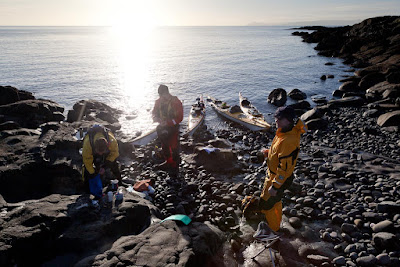 Upon arrival we had a serious discussion about whether we would be having second breakfast or third luncheon. I was of the opinion that because the sun could be clearly seen over Phil's shoulder that it must be first luncheon. This discussion was not just of semantic importance. No matter how fine it is, we do not normally quaff malt whisky at breakfast. Without further ado, I settled the argument by opening the 10 year old Jura. It was notable that none of the others disagreed with this decision. 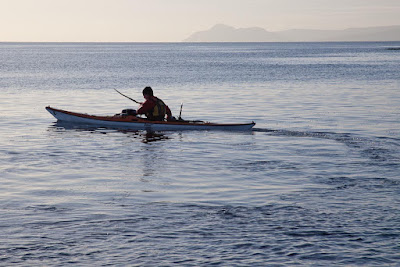 While we enjoyed luncheon in the sunshine, Phil swapped his Quest for the new P&H Cetus MV, which I have on long term test. He could hardly believe how tight it turned compared with the Quest. He also commented on how comfortable the seating position was and how stable the kayak felt on edge. 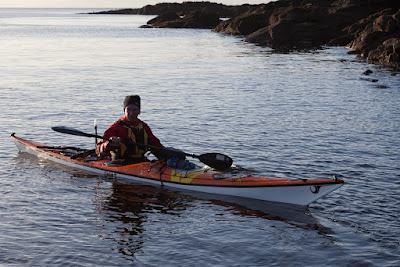 His grin, when he returned, said it all but he was not going  to get away with paddling the Cetus MV all the way across to Arran. Oh no, I was going to make sure I got it back. I distracted him with some more 10 year old Jura and jumped back in before he realised what I was up to. I will say a lot more about the Cetus MV in the future but let me just say that so far, in conditions from flat calm to force 4/5, I like it a very great deal. The only minor niggle has been some skeg problems caused by very light downhaul elastic in the prototype Mark 2 skeg system in this kayak. It is the only touring kayak that I have tried that might tempt me away from my beloved Nordkapp LV.

Soon we had to launch for the second leg of our paddle, down to Garroch Head then across the Sound of Bute to Arran.
Posted by Douglas Wilcox at 7:00 am 3 comments: