Rock and roll on Ailsa Craig 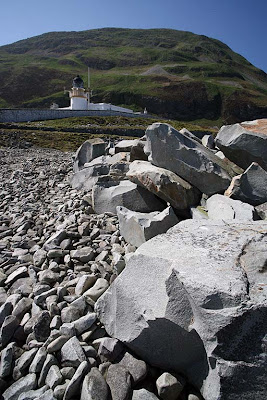 From the slopes above the lighthouse, we had spotted a huge pile of granite boulders at the top of the beach. These had been collected in 2001 by a digger and dump truck from the site of the old quarry by the south fog horn. No fresh blasting took place, the pieces of rock had lain there since the quarry was abandoned in 1971. The moving machinery had been brought by landing craft by Kays of Mauchline who make the world famous Ailsa Craig curling stones. They removed 1,500 tons of granite on the landing craft and left the remainder on the beach for future supplies. 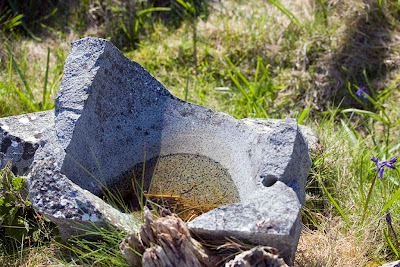 In the past, the granite was cut into cylinders of rock on the island. The cylinders were then further cut and finished into curling stones at Kay's workshop on the mainland. It is still possible to find blocks of rock that have had cylinders cut out. 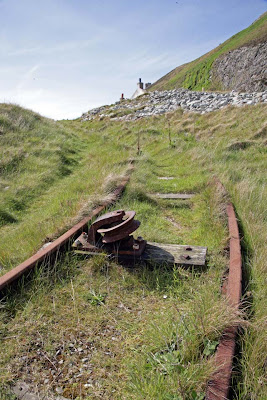 Although Kays used a JCB digger to load a landing craft in 2001, in the past a light railway served both the lighthouse and the quarry. Wagons loaded with granite rock were allowed to roll down the slope to the jetty. 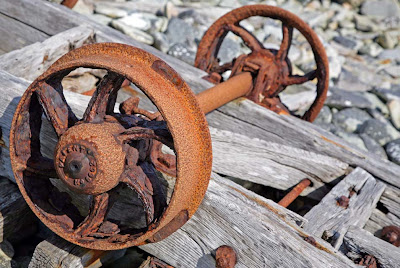 This rusting truck is just about all that is left of the wagons. The railway was operated by a cable system. When hauling oil and supplies up to the lighthouse it was powered by an engine in a pit at the top of the railway. 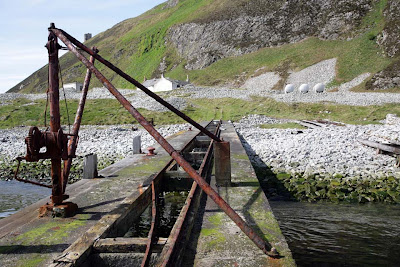 The railway ran right to the end of the pier where a crane was used to unload and load supply and quarry ships.