The Old Man of the Mull of Logan. 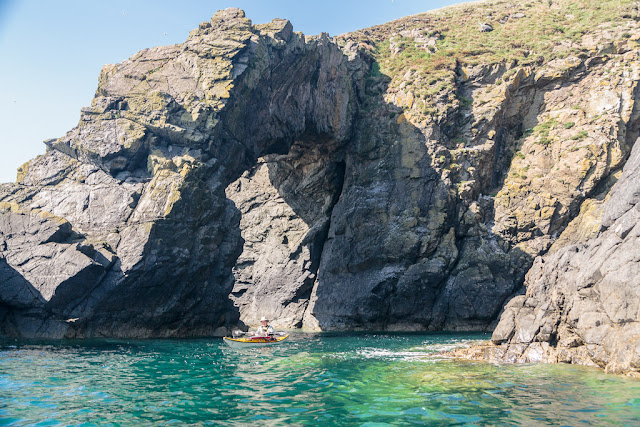 At the Mull of Logan there are a number of hidden inlets which lead to the great rock arch called the Devil's Bridge. Phil, Tony and I had been before but as Maurice had not been before (and we had said nothing to him) he amazed when he found it. 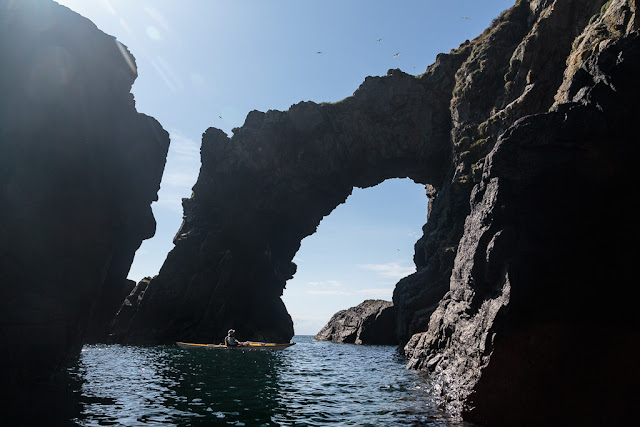 Those entering the recesses and passing under bthe arch do so under the baleful stone gaze of the Old Man of the Mull of Logan. 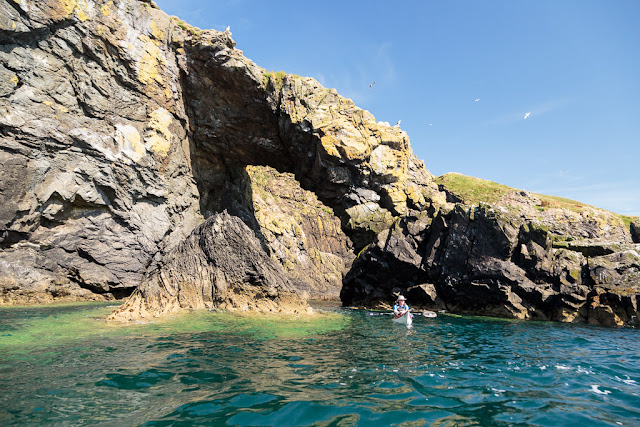 We dallied for some time in this wonderful spot but the tide was still rushing north and we were now going to head south to Port Logan... 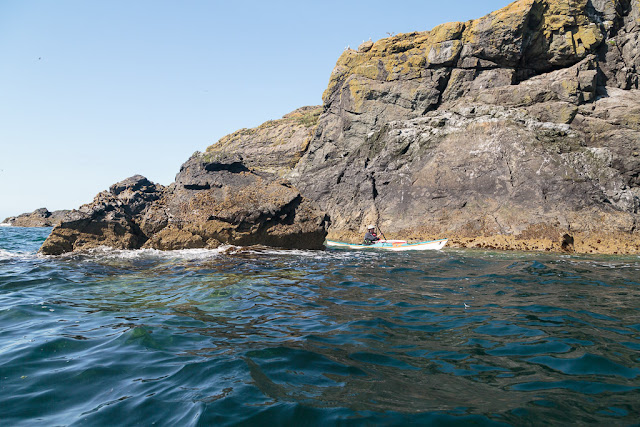 ...against the tide.  There was no eddy on the SE side of the Mull but close in the tide was only running at 4km/hr compared with 9km/hr just a few meters out. 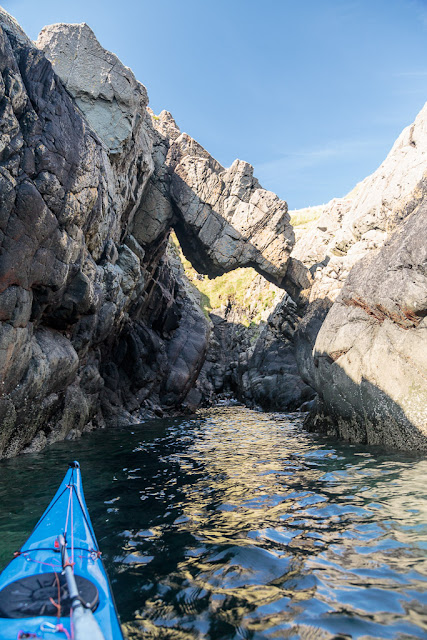 Soon we were in quiter waters and the coast here has a maze of gullies many of them interconnecting. This arch is called Little Bridge. 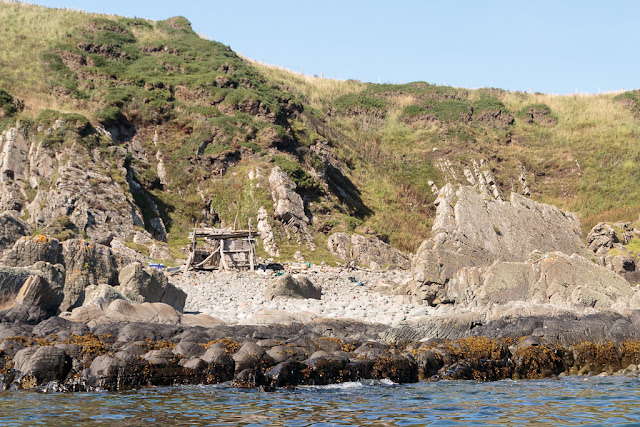 Further along we came to this old cabin before we arrived... 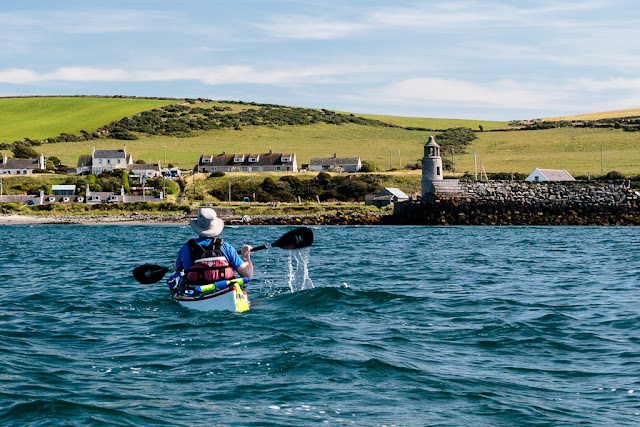 ...in Port Logan Bay which is backed by the fertile fields of the Rhins of Galloway. 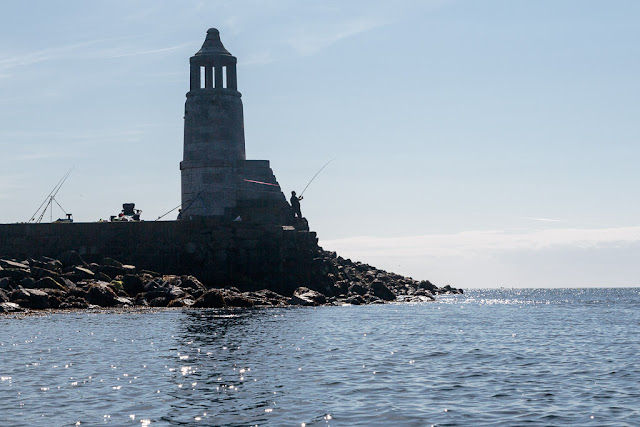 Our final obstacle was clearing the lines of the many fishermen who lined the old pier. Port Logan was originally called Port Nessock and in the 1
7th century attempts were made by the McDouall family to establish it as a ferry port for Ireland. They also built the Port Logan Inn which is sadly closed at the moment. 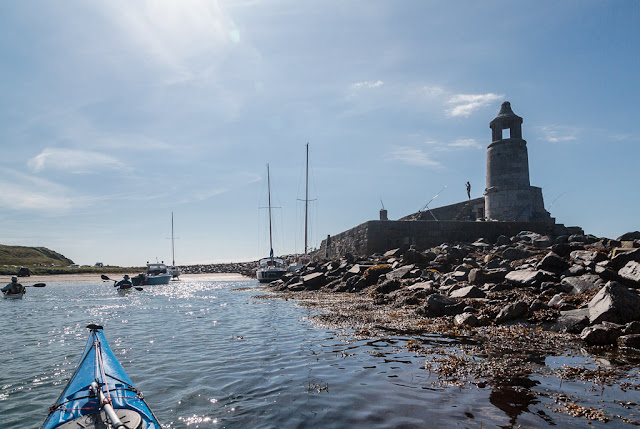 The quay and Port Logan Light were built in 1830 by Colonel Andrew McDouall. The light is a conical stone tower with a platform for a lantern. It is not known when it was last lit but for sometime after that it had a bell, which was rung to guide local boats back in foggy conditions. A decent road to the village was not constructed until the early 20th century, so most of the village's trade and traffic depended upon the sea. A life boat station was built at Port Logan in 1866. It closed in 1932 as the RNLI lifeboat at Portpatrick, 18km to the north west, was motorised by then. The boat house is now the village hall which you can find near the quay. 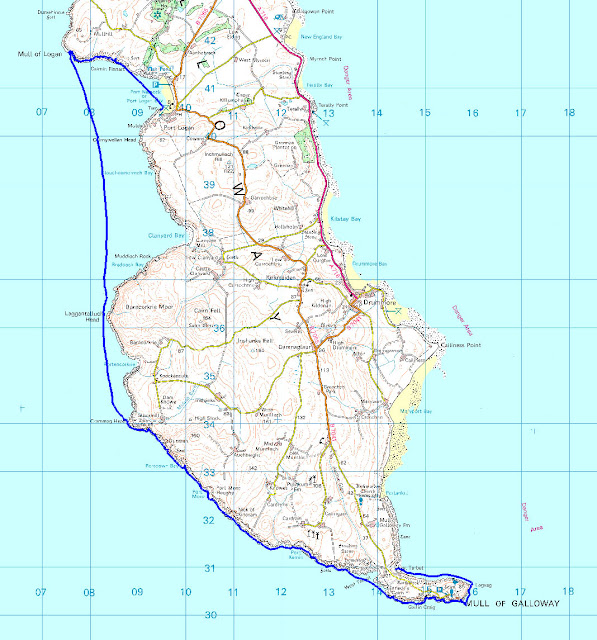 Our 24km trip from the East Tarbet round the Mull of Galloway, Crammag Head and the Mull of Logan is one of the finest paddles in Scotland. However, due to the tides it can be very serious if there is any wind.

Posted by Douglas Wilcox at 8:50 am 5 comments: