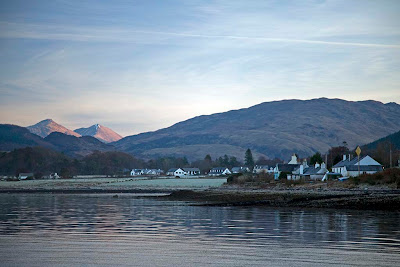 Port Appin is a sleepy little village which nestles below the mountains of Appin which seperate Loch leven and Loch Creran on Argyll's rugged west coast. Port Appin was never a fishing port but it served as a stopping point in the 19th century for steamers travelling between Glasgow and Edinburgh via the Crinan and Caledonian canals. 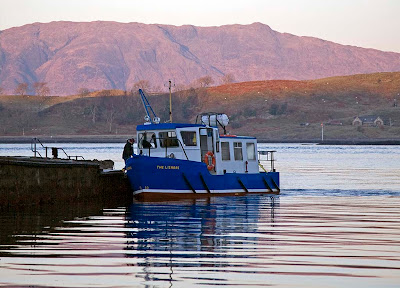 Today it serves two small ferries. This is the Lismore which carries foot passengers across the Lynn of Lorn to the beautiful island of Lismore. In Gaelic, Lismore means the big garden. It is more fertile than many of the Scottish islands because of the presence of limestone rock. From 1800 till 1934 this was quarried and heated in lime kilns to produce lime for agriculture on the west coast and building in Glasgow.

The quarrying tradition in these parts started again in 1986 when the Glensanda quarry opened. It is one of Europe's biggest quarries and its granite rock was used to make the channel tunnel. Glensanda quarry is removing an entire mountain, Meall na Easaiche, on the Morven coast on the far side of Loch Linnhe, beyond Lismore. It is situated just behind the mountains in the sunshine in the photo above. Another ferry carries local workers from Port Appin across Loch Linnhe to Glensanda. 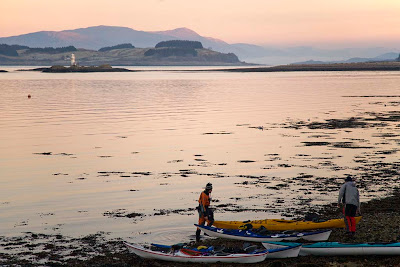 We were bound for a circumnavigation of Lismore and also chose to launch from Port Appin. We carried the boats over frost covered seaweed in the predawn light. Although we were still in freezing shade, there was a lovely pink glow in the sky reflected from the tops of the high mountains which were already in sunshine. 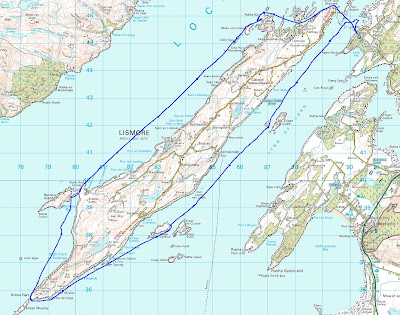 We planned a clockwise circumnavigation. It is 37 km and we knew that it would be dark before we finished as sunset would be about 15:34.

On the NE going flood an eddy runs SW from the islands along the SE coast of Lismore so we reckoned we would have tidal assistance for most of the day.