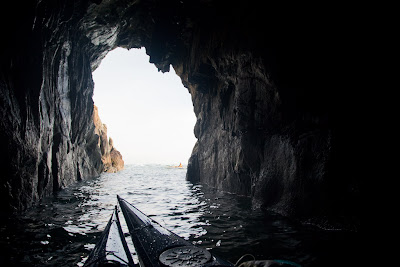 Once we had made sure that Phil and David were safely round the Mull of Galloway, Tony and I thought we had better hide in Lunnock Cave for a bit, till they cooled off!

David had done incredibly well, given it had been his work Christmas Party the night before and he had not got home till 330am. Phil had done the gentlemanly thing and driven him down to the Mull. We had told David and Phil that it might get a wee bit bumpy at the point, but David wasn't really listening, as he was trying to tune his radio into Radio 2. Apparently, he did not hear me shouting to keep close into the rocks and Phil thought the waves at the rocks were clapotis to keep well clear of. So David and Phil spent a little longer in the race than might be prudent.

The first few waves broke right over him and David said later that he never wished to wake up from a hangover that way again! The third wave imploded his spray deck and filled his cockpit with water but full of stoic, he paddled on till eventually, he and Phil broke out of the race.

This was all incredibly entertaining for the rest of us. Jim rafted up to pump David's boat out, as he regained his composure and Tony and I thought we had better retreat to the cave, where our laughter might be more discrete. 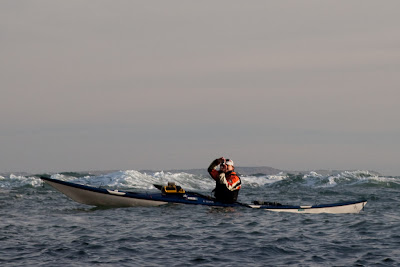