Loch Ranza and its two castles.

As the ferry approached the jetty at the village of Lochranza on Arran, we decided that Loch Ranza would warrant some exploration before we set off on our long paddle back to Portavadie where we had left the car. The village of Lochranza nestles under steep hills on the shore of its eponymous loch. Some parts of the village get no direct sunlight in the winter as the sun never rises above the hill behind. 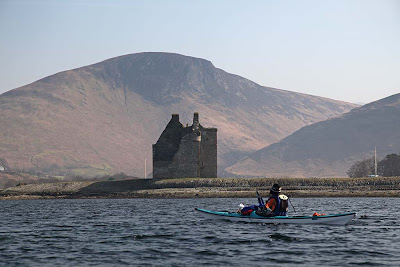 Leaving the ferry jetty, we paddled towards Loch Ranza castle. It has a superb defensive position on a narrow spit of land which projects into the loch. The castle was first built by the MacSweens in the 1200s but the L shaped tower house you see today dates from the 15th century. 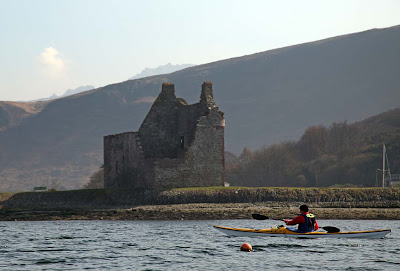 Robert the Bruce came here in in 1306 and the castle was associated with the Scottish Kings for a long time thereafter. It was used as their base during battles with the Lords of the Isles for supremacy over the west coast and the Hebrides. 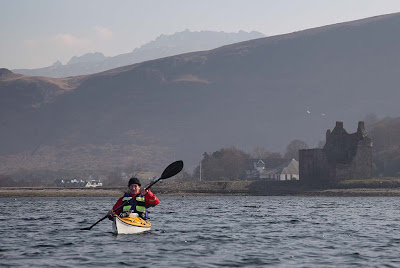 Many years ago Loch Ranza was a major base for the herring industry. Hundreds of small herring fishing boats sheltered in the loch, when great shoals of the "silver darlings" filled the Clyde. The herring have long gone and as reported in a yesterday's post, no fish are now landed on Arran. 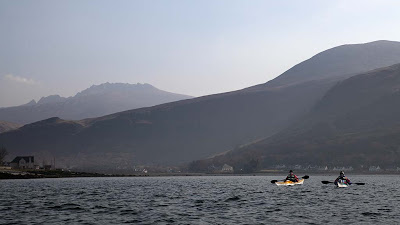 As we paddled out from the Loch Ranza, the great rocky ridge of Caisteal Abhail soared above the hills behind the loch. Several granite tors castellate the ridge like battlements and the Gaelic name means "forked castle". Caisteal Abhail is Loch Ranza's second castle!