Taking a gander along the north coast of Muck

As we left Camas na Cairidh on the north coast of Muck the Sea of the Hebrides was glassy calm and in the clear air the mountains of Rum were dappled by broken sunlight which broke through the low clouds.

We left Eigg far in our wakes as we paddled along the north shore of Muck. 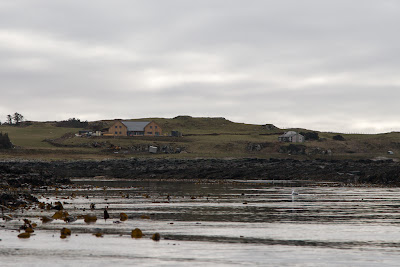 We arrived at Gallanach Bay where a significant new building is taking place. It is Gallanach Lodge and will replace the island's existing hotel at Port Mor when it opens on 27th May 2013.

A little further west and we arrived at Gallanach Farm. The four Small Isles have very different ownership arrangements. Canna is owned by the National Trust for Scotland (a charity), Rum by Scottish Natural Heritage (government funded agency), Eigg by a community buyout and Muck is currently privately owned by the MacEwen family whose predecessors have owned it since 1897.

It is very interesting to compare how these very different owners have managed the development of each island. 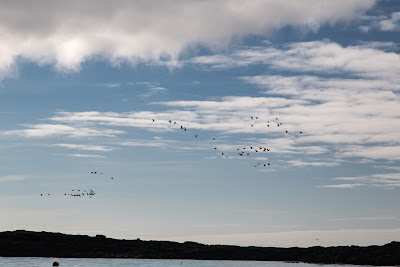 As we left the bay in front of the farm, the clouds cleared but the air filled with hundreds of... 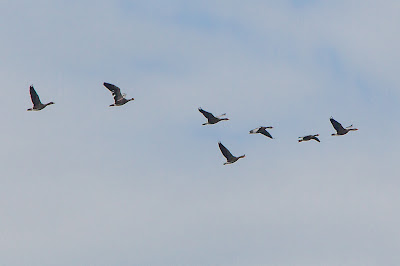 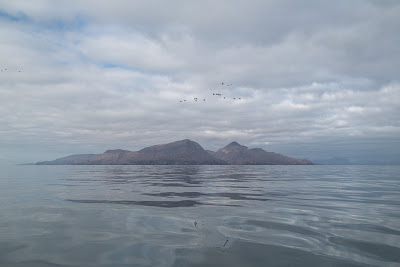 ...the direction of Rum. This is the lovely view which will be enjoyed by visitors to the new Gallanach Lodge. 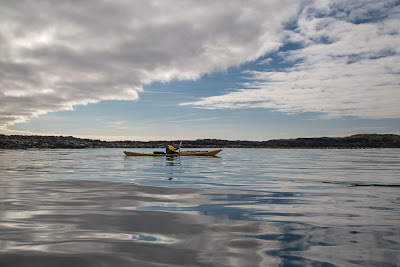 Ian and I had booked a couple of rooms in the somewhat less grand Muck Bunkhouse so we still had some way to go. As we looked for a gap between Muck and the island of Eilean nan Each the clouds opened a a front stretched away as far as the eye could see. 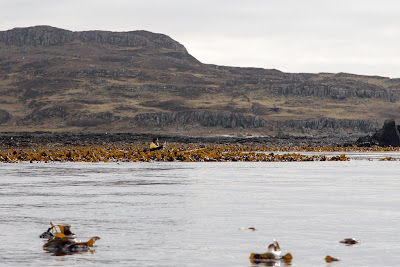 Unfortunately the gap shown on the ordnance survey 1:50,000 and 1:25,000 maps is no longer present at low tide. It is filled by a great bank of cobbles washed up by storms. We now set off to add a Eilean nan Each to our circumnavigation of Muck.
Posted by Douglas Wilcox at 9:06 pm No comments: