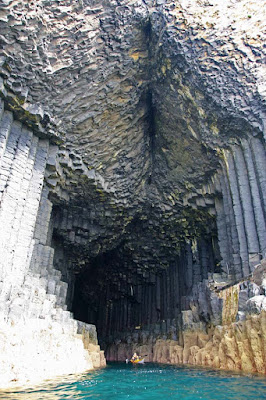 I have posted on Fingal's Cave before but as it is truly one of the wonders of the sea kayaking world, I hope you will forgive another visit.

Fingal’s Cave on the island of Staffa is the largest columnar basalt cave in the world. Even the roof is composed of end on hexagonal and pentagonal columns. The cave has a height of 20m above sea level but the depth below the water is also 20m! The cave stretches back for 69m and at its mouth is 13m wide. The vaulted ceiling and columns, like organ pipes, give the impression of a great natural cathedral.

Some say its name refers to the Celtic hero Finn MacCool, others to the Gaelic words for “fair stranger” which refers to the Norsemen. Whatever, this name first appeared in the 18th century. The old Gaelic name is An Uamh Bhin; “the Melodious Cave”. 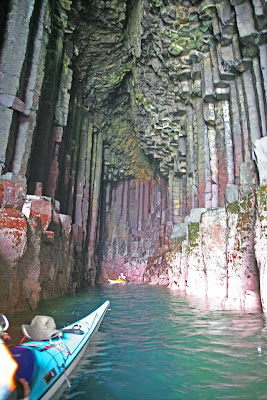 The noise of a gentle swell in the back of the cave is particularly melodious but only God would know what it would sound like in the midst of an Atlantic storm. 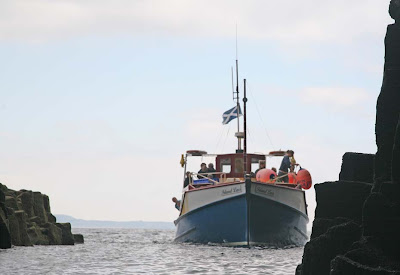 The tourists on the “Island Lass” had come from Ulva Ferry on Mull. We provided part of their entertainment.

Of course Fingal's Cave is not the only cave on Staffa....
Posted by Douglas Wilcox at 3:47 pm 7 comments: