A series of coincidences on our leaving Cara and Gigha. 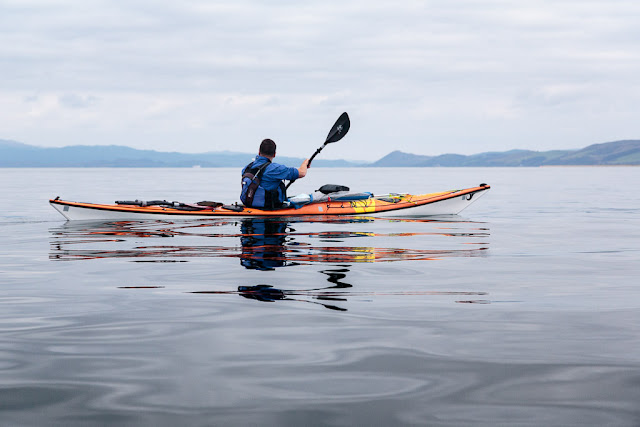 We enjoyed a leisurely first luncheon on the white shell sands of Port Sgiathain on the south west coast of Gigha. (Perhaps it was only second breakfast because I cannot recall if any essence of Jura was consumed.) We were in no hurry as we wished to use the ferry slipway at Tayinloan to recover our kayaks. Having no desire to inconvenience the ferry or experience the unleashing of its ramp we planned our our crossing so that it would coincide withe the ferry's departure from Tayinloan. This meant that it would overtake us on our crossing of the Sound of Gigha so we kept a sharp lookout behind. 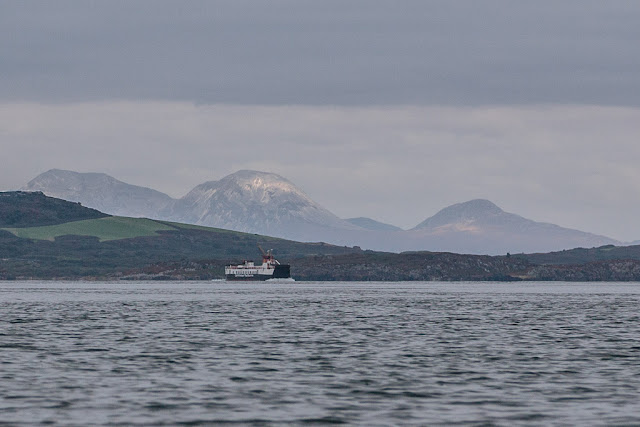 The rumble of engines soon announced the passage of the MV Loch Ranza but we were well to the south of her course. For the first time Ian caught a clear sight of the Paps of Jura and I regailed him of the trip Tony and I had made to Jura back in April. So that's another future trip sorted!

Gradually Gigha, the Paps of Jura and...

...Cara with its white sands, Mull and Brownie slipped astern as we approached... 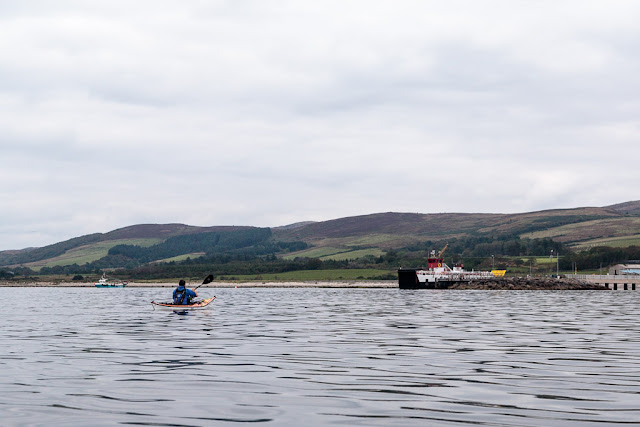 ...Tayinloan on the Kintyre side of the Sound. 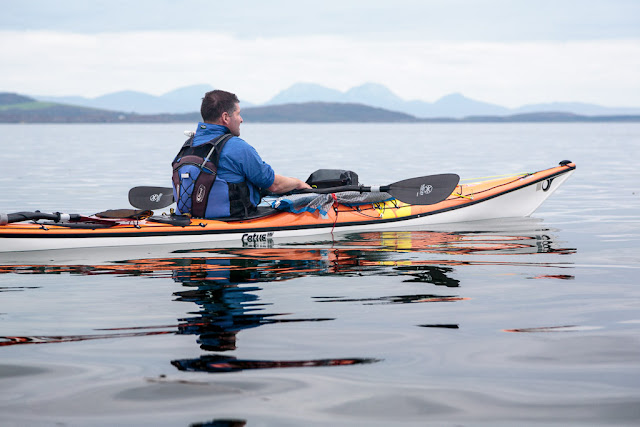 We had only the briefest of stops, while the ferry finished loading, during which we had time to admire... 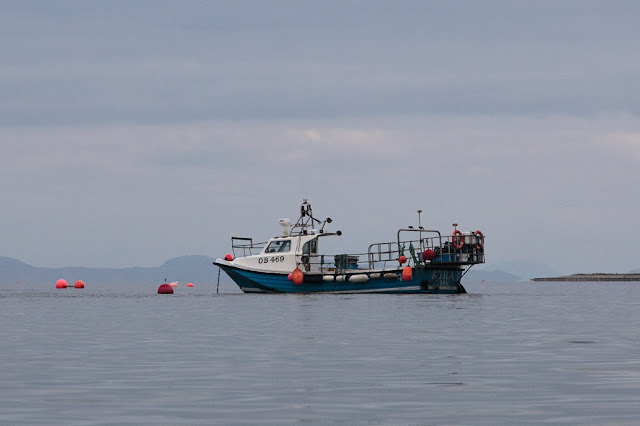 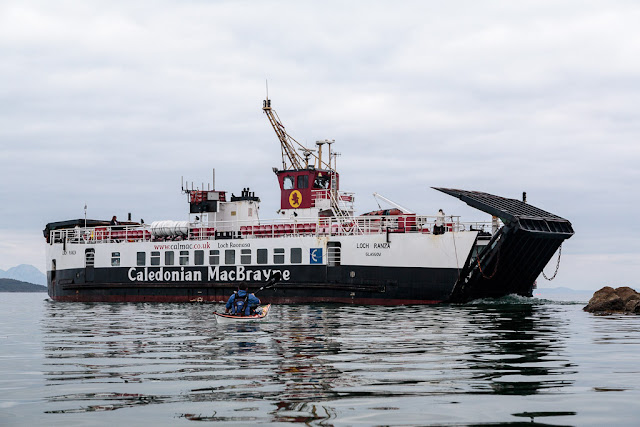 ...the Loch Ranza departed with another cheery wave from her captain.

As the ferry motored her way back to Gigha... 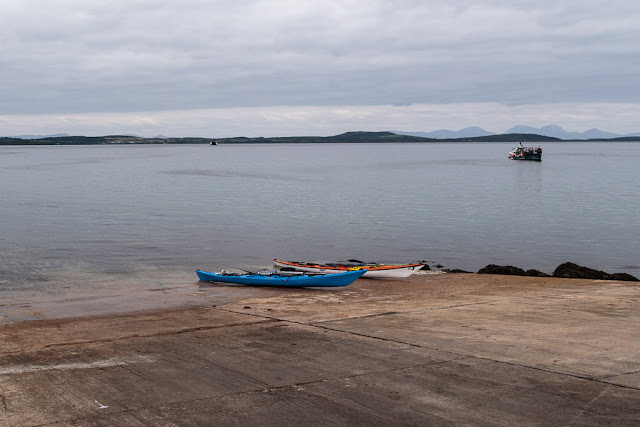 Ian and I landed on the slipway and strolled back to the cars for our kayak trolleys. It had been a truly laid back and delightful trip and we savoured our last moments on the west coast of Kintyre. We were in no particular hurry and decided to enjoy the delights of Jessie's Ferry Farm Tearoom before heading on our way. Coincidentally Ian and I both chose the daily special, wild boar with chorizo burgers which were literally immensely satisfying! Ian and I now faced equally long drives to diametrically opposite parts of Scotland. Ian to Grampian in the NE and myself to Galloway in the SW. Amazingly we each arrived safely within 10 minute of each other. What a coincidence! But this was not the only coincidence on this trip. I had set my iPod onto shuffle play and remarkably the second song which came on as I was driving north on Kintyre towards West Loch Tarvert was by Paul McCartney and Wings. No it wasn't Mull of Kintyre, with its mist rolling in from the sea (of which we had seen plenty). It was Helen Wheels, which recounts one of the McCartney family trips from their farm on Kintyre to London in their trusty LandRover which they called "Helen Wheels". I am pretty sure that the Brownie of Cara would not know how to hack an iPod shuffle play order....or would he? 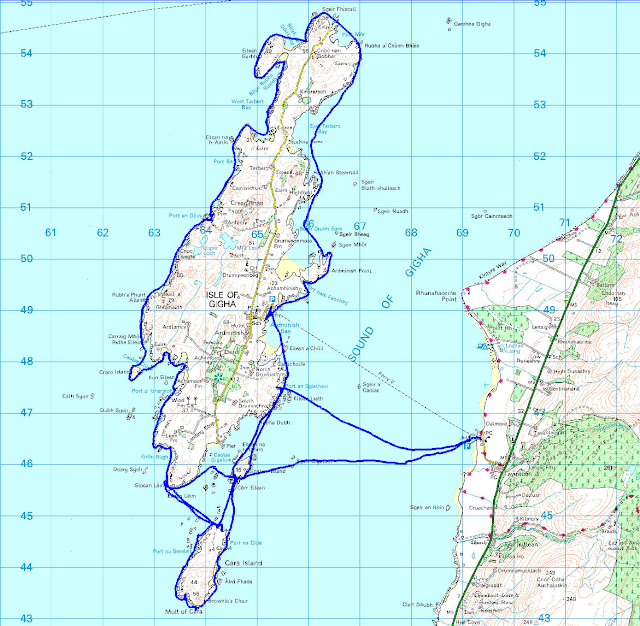 Altogether we had enjoyed two half days and one full day paddling 51km round Gigha and Cara. It was probably about my 10th sea kayaking trip but Ian's first. Like me, he plans to return but I do not think that is a chance coincidence!
Posted by Douglas Wilcox at 9:13 am 4 comments: