A foggy crossing to Gigalum and why I never go to sea without GPS. 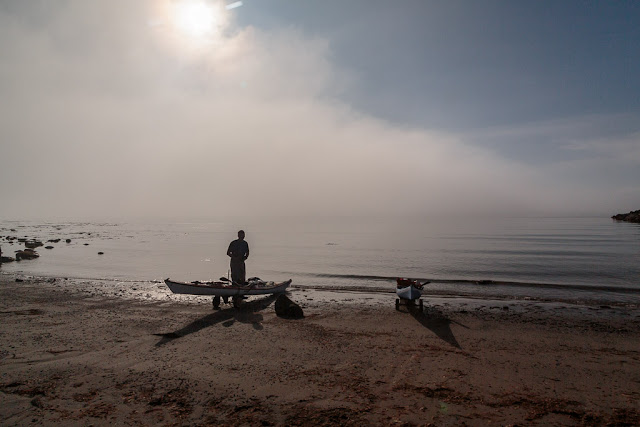 Back on the first of October much of Scotland basked under the blue skies of an Indian summer. Ian and I decided on a short notice camping trip of two nights to Gigha and Cara. When I arrived at Tayinloan on the Kintyre mainland there were stunning blue skies but as Ian arrived thick mist rolled in from the sea. The very stuff that Paul McCartney wrote about when he was staying in his farm just down the road. We decided to take tea and cake at the excellent Ferry Farm Cafe which is adjacent to the ferry car park. 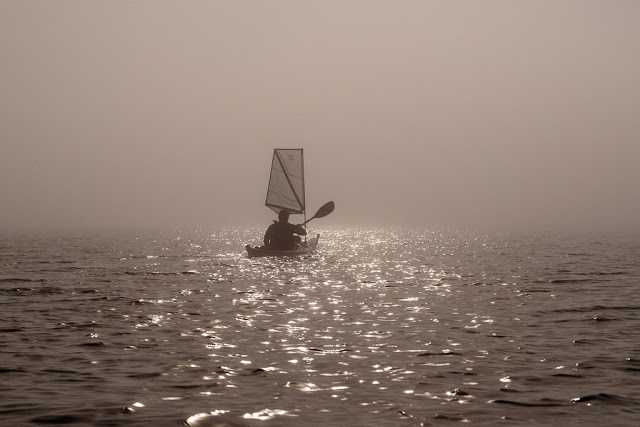 Well fortified, we set off into the fog on a 5km crossing of the Sound of Gigha. I regularly paddle in fog on the Solway and Ian and I have paddled together from Rum to Eigg in thick fog so we didn't think twice about it. I had plotted a waypoint into my GPS that would take us on a course that diverged south of the ferry route by 60 degrees. I had set it for the isle of Gigalum at the south end of Gigha as it would cross the Flat Rocks the Wee  Rocks and Gigalum Rocks on the way. This would expose us to the minimum danger of shipping as anyone with a draught of more than a few inches would keep well clear of these rocks in fog. The ferry captain did ask us about our plans as he was concerned in case he ran us down. However, he was reassured when he heard our plans. Of course both the wind and tide would carry us off course but I had set my GPS to give the bearing from our current position to the waypoint on Cara. As we crossed if the bearing dEcreased we went lEft and if it Increased we went rIght. 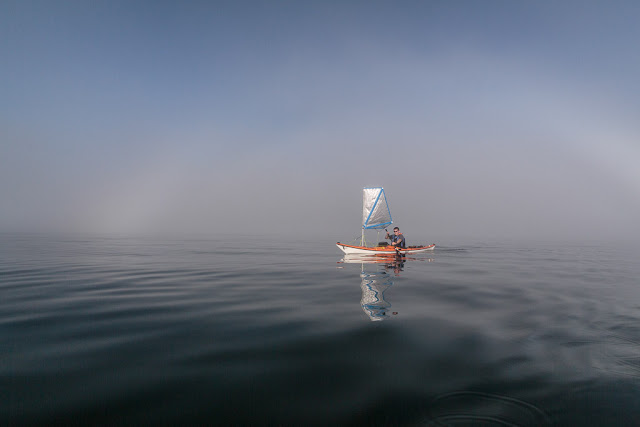 Half way across, the mist thinned just for a moment and we were lucky to experience this wonderful fogbow. 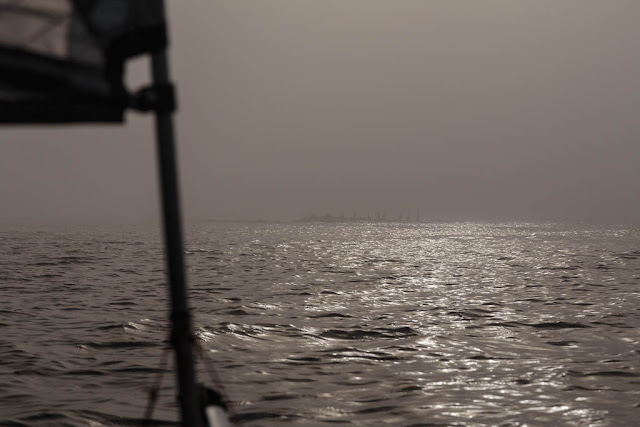 We caught sight of something in the mist. The fog magnifies everything and Ian thought it was an island with trees but it was just Gigalum rock with some cormorants on it. We were bang on course and Ian called the ferry captain on the VHF and let him know our exact position. We could hear his engine rumbling well to the north. 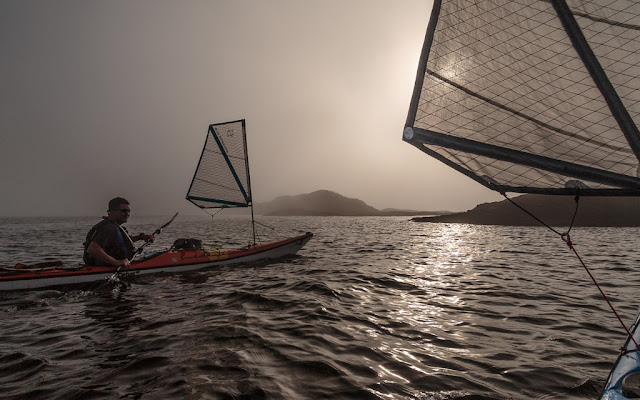 Shortly afterwards we arrived at Gigalum and... 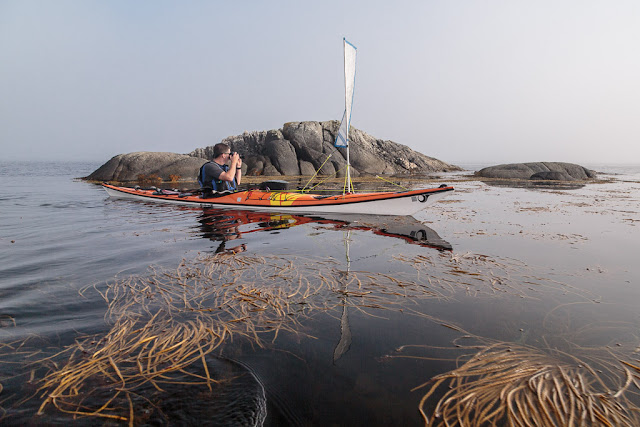 ...a hazy sun put in a brief appearance as we paddled through the amazing Gigalum skerries. There was no chance of getting run over in the fog here. Many very experienced sea kayakers are disparaging of GPS and never use it. Pn the contrary, I never go to sea without a GPS (actually I have two, my phone is a backup). Of course on this crossing I was also using my compass, map, ears, nose, sense of what the wind was doing (and the smells it carried) and sense of what the tide was doing. I suspect that some of those who chose not to use GPS do so because they have not taken the effort to learn how they work and understand their advantages and disadvantages.
Posted by Douglas Wilcox at 11:31 pm 2 comments: 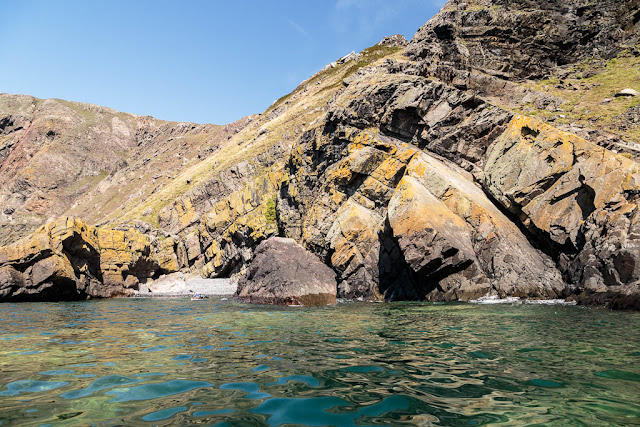 As we approached the Broadstone of Portdown on the west coast of the Rhins of Galloway we decided to stop for... 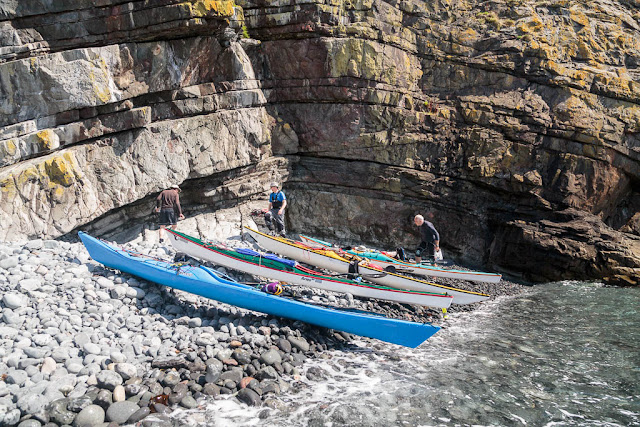 ..first luncheon at what we call Rainbow Rock. It has a steep... 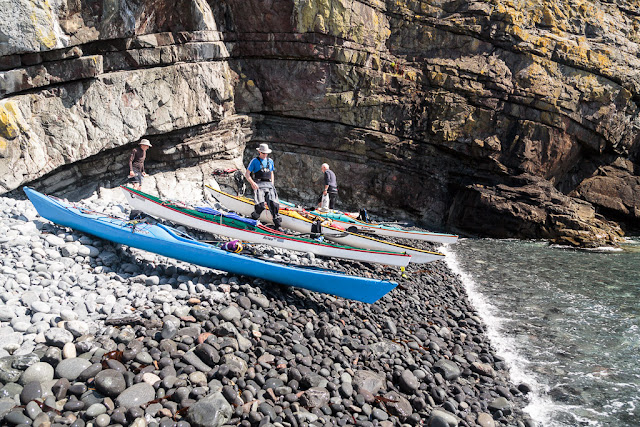 ...cobble beach and even in calm conditions there always seems to be some swell but... 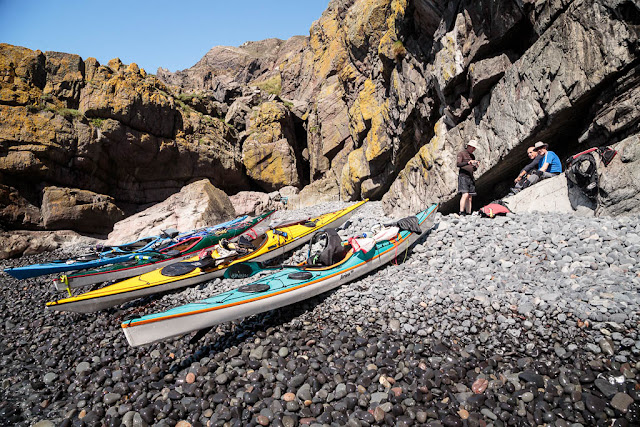 ...it makes a really great place to stop. 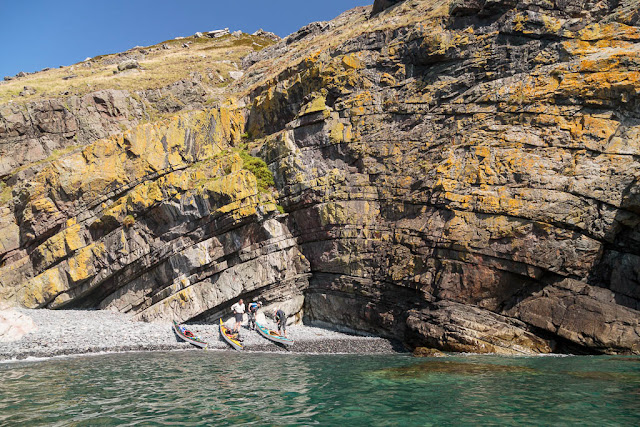 You can see why we call the Broadstone Rainbow rock! 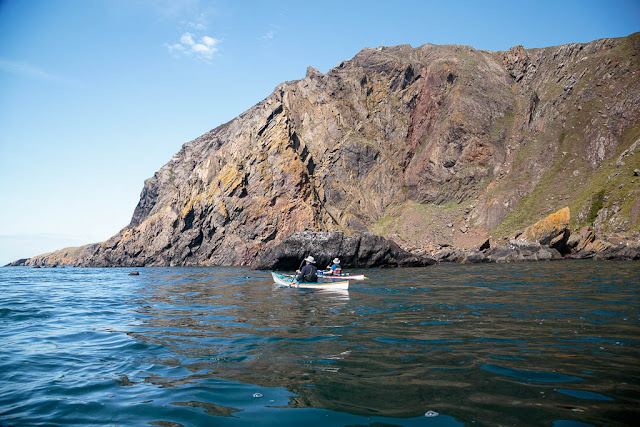 During our luncheon the tide continued to build and when we rounded... 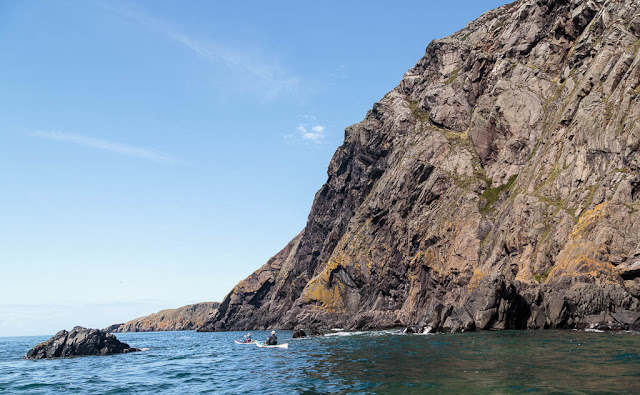 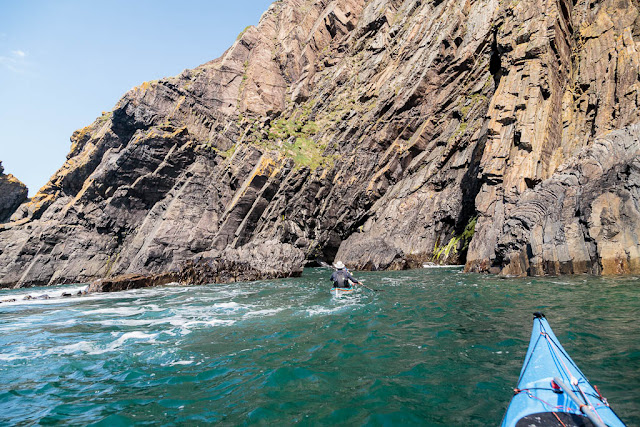 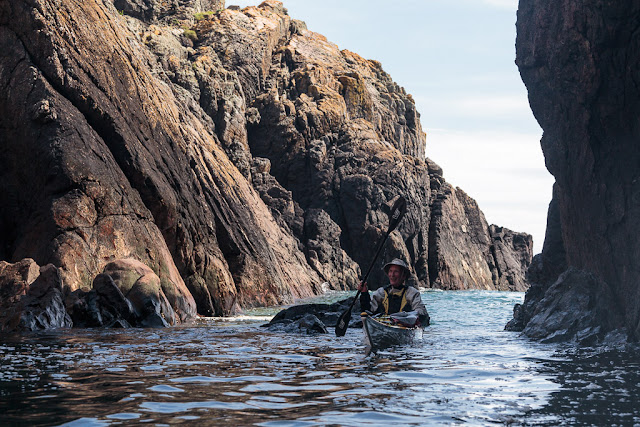 We took a breather in the slack water in the recesses of Sloucheen Slunk and when we had negotiated the right angled bend we emerged into the day again and took a last look back... 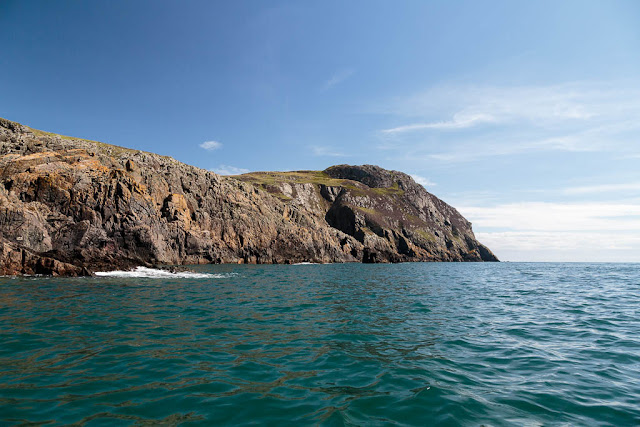 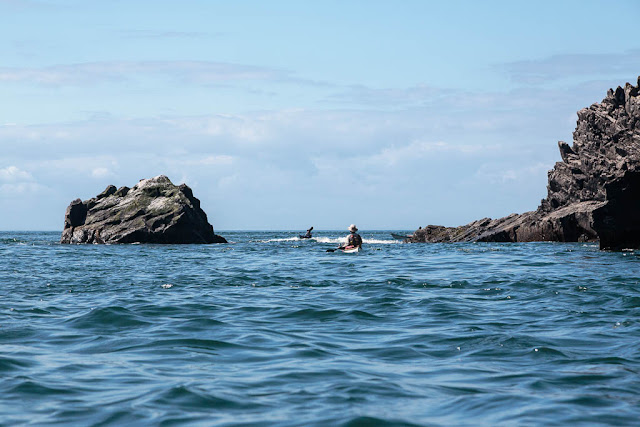 The next headland was Gabarunning and we sped through the gap on a tide that was vrunning at 11km/hr until... 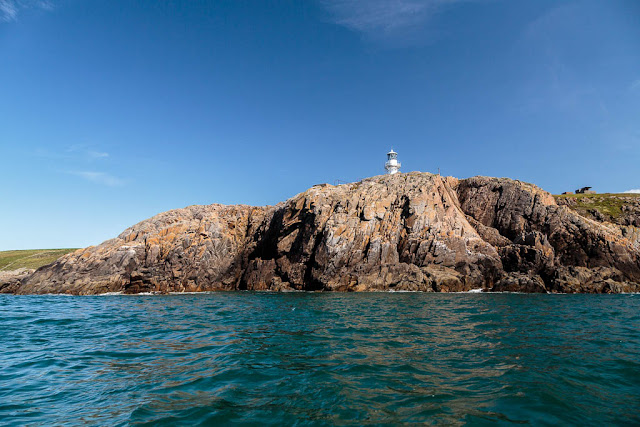 ...we were rushed passed the next headland at Crammag head with its lighthouse and WW2 lookout post. 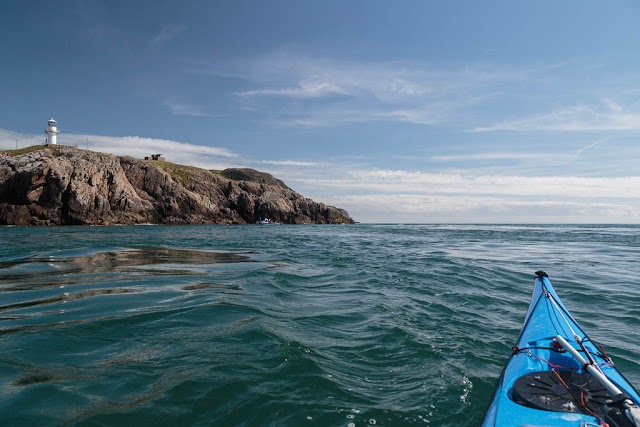 Rather than fight against the eddy north of Crammag Head...

...we stayed out in the tidal stream which was still at 10km/hour for as long as we could. We were rather grateful there was no wind as it can get a tad bouncy round these parts!
Posted by Douglas Wilcox at 4:26 pm No comments: